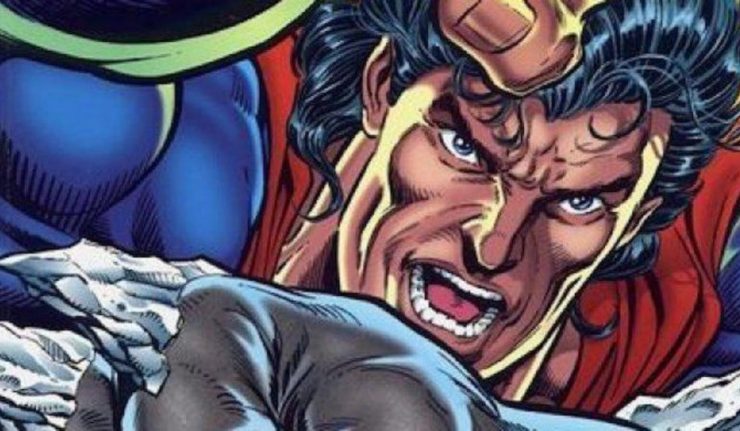 Doomsday smashed his way into pop culture consciousness in Superman #75, the penultimate chapter in The Death of Superman. Since then, the character has appeared through animation and live action appearances in Batman V. Superman: Dawn of Justice and the SciFi Channel’s Krypton. Doomsday is so unique because not only because he can break Superman, but he has a unique origin as well. Crafting that backstory, in the midst of the April 1994 follow-up miniseries Superman: Hunter/Prey, was a task that Doomsday’s creator, Dan Jurgens, reflects on 25 years after its publication.

Misery Made Him a Fiend…

In his debut, Doomsday achieved notoriety as the monster who killed comics’ first superhero. However, that still left him one-dimensional. He had been exiled following Superman’s demise by Hank Henshaw, aka Cyborg Superman, while he was posing as a resurrected Superman. Although The Man of Steel actually returned, that resurrection excluded a rematch with Doomsday.

But would Clark Kent truly want one? Jurgens spotlighted Clark’s unresolved trauma in this story to emphasize his humanity and relatability. “[I] always tried to make [Clark] as human as I could, ” he explains. “I don’t care if you’re Superman [or] the toughest six-year-old that might be around. Everybody has something they’re afraid of. That’s why we can always relate to that; there is always that echo in the night.”

Jurgens also managed to build upon the character by injecting pathos into Doomsday’s background. As an out-of-control experiment in evolution conducted by the alien Bertron, this Shelly-esque approach gave plausibility to the creature’s monstrous nature. Jurgens observes:

“[There] is something rather horrific, [about taking] a creature and trying to cultivate something that can evolve to face whatever the obstacle is on a much quicker rate. To watch them die over and over again, and recreating them so you push that evolutionary process along at a faster rate – I think the kind of mind that would engineer something like that is something that would be worth exploring, and I think it has helped make Doomsday’s origin unique.”

The decision to make Doomsday’s creation a Kryptonian experiment made sense in certain unexplained coincidences.

“[Once] Doomsday broke out of the chamber that was buried deep underground and he started moving, and he grunts, he goes ‘MM-tr-plss’ or something like that. Why? Why go to Metropolis? If there’s some ability to sense Superman as a Kryptonian and as a threat, then I thought that is something that helped tie that particular problem up and pull it together.”

Another returning antagonist from the Death storyline is the aforementioned Cyborg Superman. Initially a riff off of Marvel’s Reed Richards of The Fantastic Four, Hank began as one of four NASA astronauts altered by an encounter with radiation in space. While two eventually died from their mutations, Henshaw’s body deteriorated, but not before learning to transfer his consciousness into machines.

The shock of seeing her husband in robotic form caused Hank’s wife to commit suicide. In grief, Hank uploaded himself into the birthing matrix that had brought Superman to Earth and exiled himself to deep space. The isolation eventually warped his thinking; he wrongfully blamed The Man of Steel for the deaths of his wife and crew and his self-imposed exile.

For Hunter/Prey, Jurgens used the opportunity to redesign Henshaw’s look in a way that was both fresh and practical.

“[The] only reason he ever put on the Superman costume was to masquerade as Superman himself. Plus, Superman already had [Bizarro], as someone who wore a version of the Superman costume. I think at that time, I looked at that as being someone who that almost got in the way of identifying who Hank Henshaw was. What I wanted to do was craft something a little unique for him as that went.”

The inclusion of Darkseid in this story was possible through the obscurity New Gods had been at that time. Beyond the late Jack Kirby’s original run, Darkseid’s animated appearances on Superfriends, and other attempts to carry on the line, New Gods lacked the notoriety they deserved in the 90s.

Jurgens took initiative and utilized the primary antagonist of New Gods in a way that did credit to both him and demonstrated the true power level of his own creation. “[While it does help] to take Doomsday and put him on that level, ” he says, “[at that point using New Gods] was a way to help keep them onstage because they weren’t being used terribly much.”

The task of fleshing out a living weapon in Superman: Hunter/Prey is one that Jurgens fondly looks back on in spite of the stress involved.

“I think the real pressure was just doing an origin story that would work for the character and not seem contrived or stupid. [He] wasn’t tied to Luthor, he wasn’t tied to Brainiac, he wasn’t tied to any of those things. It was different, and it was new, and it worked on its own. I think it did make Doomsday, with that highly accelerated rate of evolution, different from anything else in comics.”