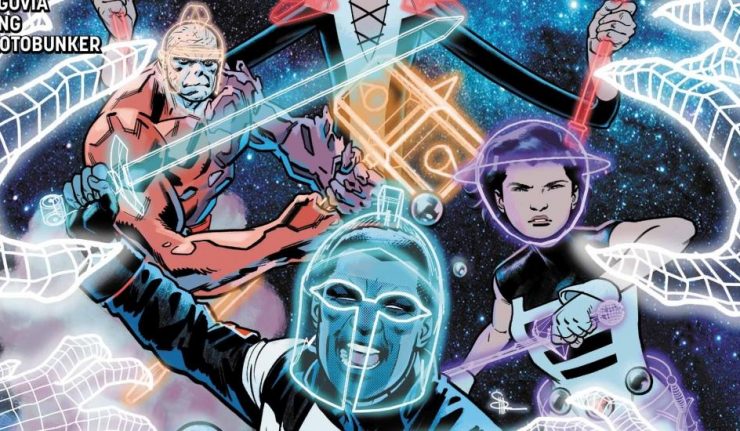 The Terrifics #16: The Terrifics have entered cyberspace for a battle unlike any they have faced before. It’s a battle against…God? Well, the science is still out on that, but as our heroes face off against all manner of monstrous plagues, things do seem to be reaching biblical proportions. Could the key to all this be the mysterious Pixel?

Jeff Lemire’s stellar run as writer has given Gene Luen Yang a boost by leaving him with one of the DC’s best titles with one of the best casts and endless story potential. However, Lemire has set the bar very high for Yang. The Terrifics #16 is only two issues into Yang’s run, so it may be too early to judge, but there are signs that his take on the Terrifics will live up to the high standard Lemire established.

One challenge Yang has is to establish Ms. Terrific as more than just a female copy of Mister Terrific. We have already seen some movement in this direction by establishing a spiritual side to Ms. Terrific to contrast Mister Terrific’s strictly rational world view. Paula has faith that there are things beyond science, while Michael only believes what his senses tell him is real or what he can logically deduce.

This also makes for an interesting connection between Ms. Terrific and Plastic Man. This offers a rare look into the man behind the Plastic Man persona. Little has been written about Patrick “Eel” O’Brien’s pre-Plastic Man days other than to establish that he was a thief and a gangster. However, this current storyline has established his Irish Catholic upbringing.

The threat the team is facing seems to be a rather complex one. Pixelix appears to working for a version of Simon Stagg, but it appears that the true source of the situation is a being called the Noosphere, who is creating the computer simulation that the team is trapped in. While the idea of being trapped in a video game world is not a new idea, it still is an interesting situation to place the team in.

The thing that has me wondering is the attacks following the ten plagues of Egypt from the book of Exodus. Neither Noosphere nor Pixelix seem like the type of character likely to borrow from the Bible, so I suspect that these plagues originate from “King Stagg”. I can easily believe that a digital doppelganger of Stagg would have delusions of godhood.

Also, I am glad to see that Plas’ son Luke is still around. Although he hasn’t joined the team on this particular adventure, if he’s still in the team’s orbit, we might get to see him in action again.

I like that Yang is following up on the story he wrote for The Terrifics Annual #1, where Phantom Girl met and felt an attraction to a doppelganger of Luke. This has left Linnya with some confused feelings about him, and Luke has sensed these feelings.

Plastic Man’s faith as shown in this issue seems to be portrayed as a blind belief instilled in him by the nuns that taught him as a child. Thus, he uncritically seems to accept that the plagues are coming from God. I think this is doing a disservice to the character, who has been shown to rather intelligent, despite his over-the-top behaviour. I think that even someone with a strict religious background would still be able to recognize that whatever is behind the plagues isn’t God, but just someone borrowing from His playbook.

The Terrifics has been one of the best titles in DC’s lineup, and the main success of the New Age of Heroes line. The question remains as to whether Gene Luen Yang can maintain the high level of quality set by Lemire. So far, it appears that he has the potential to do so and has made a decent start.