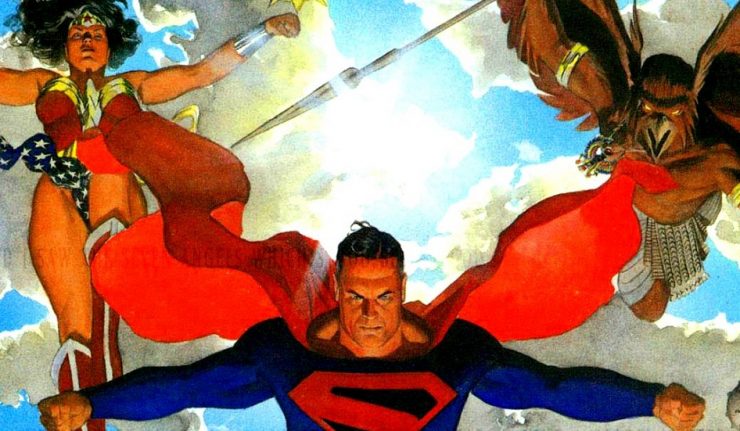 Bendis Is At It Again

Writer Brian Michael Bendis is not slowing down in his new employment at DC Comics. Besides helming the Superman titles and resurrecting Young Justice, Brian will now delve into Mark Waid’s territory.

On his Twitter account, Bendis recently teased an image of YJ members fighting alongside the cast with characters of the 1996 miniseries Kingdom Come, a project Waid penned and a then-unknown Alex Ross painted with tapestry quality. It’s a follow-up to an earlier announcement of the team finding themselves lost in the multiverse. The last writer to sample this Elseworlds tale was writer Geoff Johns. He borrowed KC Superman for his run on Justice Society of America in pre-Flashpoint continuity, and did so in a way that it still maintained Waid’s original story. Bendis’ choice to have a collision of generations of heroes follows along that same theme.

Kingdom Come was Waid and Ross’s response to the 1990s dark trend of antiheroes and vigilantes. Set 50 years in the future, Superman had lost his beloved Lois in an attack by The Joker. Seeking exile, his departure inspired the rest of the Justice League to do the same. In their absence arose a new breed of amoral metahumans who seemed to fight only for the sake of fighting. At Wonder Woman’s urging, following a nuclear disaster in Kansas, Superman returns to restore order, unaware that not all his former allies welcome this prospect or direction. Waid masterfully frames the sequence of events through the observations of the god-like Spectre, and a pastor named Norman McKay.

This clash of past and future titans begins in Bendis’s Young Justice #7, due on the stands July 10.