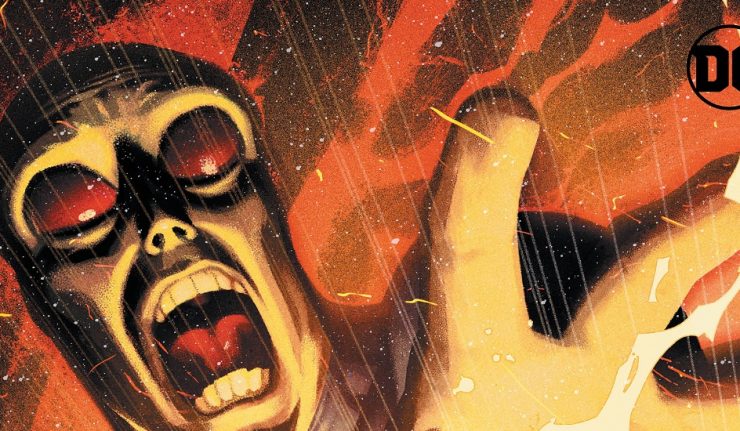 As much as she hates to admit it, Diane needs J’Onn’s help in order to save Ashley, but J’Onn’s through sneaking around and hiding from people he respects.  It’s time for Diane to know the full truth. Martian Manhunter isn’t a hero after what happened on Mars.  Not yet.

J’Onn J’Onzz has lost the trust of the only human he’s ever felt close to, he’s been telepathically annihilated by Cha’Rnn, and now he has to relive the worst moment of he life as he tells Diane everything in order to revive their partnership. Is there a limit to suffering?  Does everyone deserve a chance at redemption?  J’Onn J’Onzz has endured more in his life time that many of us could ever imagine. He carries his pain and hardship every day, but is this what he deserves?  We may have arrived at Martian Manhunter #6, but this is only the beginning as J’Onn seeks out redemption.

Suffering is often a core component when it comes to superheroes.  Any fears, dreams, motivations, and quirks a hero might have can often be traced back to earlier suffering.  A lot of this suffering comes from loss.  Sometimes the loss could stem from death such as Superman having to grow up without a planet as one of the last Kryptonians.   Other times, the loss could stem from the loss of something we take for granted every day, such as Daredevil losing his sight. It is how individuals react during and after these events that determines their fate as a hero.  Some rise to the occasion, some descend into villainy, and others travel a much more varied path.  J’Onn J’Onzz has, perhaps, experienced the greatest pain imaginable.  J’Onn hasn’t always been the last of his kind, but he has always been alone on earth; a Martian among men.  Since his creation by Joseph Samachson and Joe Certa in Detective Comics #225, Martian Manhunter’s origin has only been added too. Elements are very rarely changed or taken away.  Instead, creators like J.M DeMatteis, John Ostrander, and Rob Williams have only added to the origin by fleshing out the circumstances, surrounding characters, and motivations involved.

J.M DeMatteis first came up with the idea of H’Ronmeer’s Curse and the incredible amount of physical, mental, and emotional trauma it adds to J’Onn’s character. It has become the corner stone of who he is, always trying to do his people proud and represent a brighter future for Earth than the fate that occurred on Mars. Thanks, in large part, to Ostrander’s run, we have seen the incident firsthand.  We’ve witnessed the painful imagery of Martians on fire, burning from the inside out with nothing we could do to stop it.  But did we really feel that pain?  Was it enough to bring us right there with J’Onn, feeling the same loss that he did?   None of us will truly reach that level, but it’s a creator’s obligation to try and evoke as much raw emotion as they possibly can from every issue, page, and panel.  That’s what Steve Orlando and Riley Rossmo are able to do here. It’s time we stand side by side with J’Onn J’Onzz at the lowest of low points as he takes his first step towards the hero we know he’ll become.

After last issue, it’s easy to think that J’Onn’s already reached rock bottom.  After being physically and mentally overwhelmed by Cha’Rnn, how could things possibly get any worse?  Orlando and Rossmo answer this question easily by forcing J’Onn, already in a low, beaten state, to relive the worst moment of his life for Diane in order to move forward. How does one get to the point where they view life as a curse that they deserve to endure?  That’s what we get to find out in one of the most brutal flashbacks ever depicted in comics.  Plascencia’s coloring is the standout star here, because if the color green could ever catch fire, Plascencia has figure out how to capture it.  Nevertheless, to truly feel, what J’Onn felt as his world collapses around him, we must start at a high moment; a beautiful Martian birth, the birth of baby K’hym.

Orlando and Rossmo masterfully guide the reader through a beautiful Martian birth that is very revealing of Martian culture.  First, Martian birth takes a conscious decision to create and it takes both partners putting in effort at once.  This is not a half-hearted decision, and no birth is an accident.  Isn’t that  a beautiful ideal scenario?  Second, there were no screams of pain, only positive affirmations and exclamations of love.  Why should the most beautiful act in the world, creating another life, be painful?  Does that make sense?  Of course not!  There is so much beauty in these two pages, from the brilliant, nebulous mixture of Plascencia’s greens and pale blues, to the idea that, while together, they are truly one, calling each other J’Onn-M’Yri’Ah and M’Yri’AH-J’Onn.  Even magnificent splash page itself is shaped somewhat like a birth canal as baby K’Hym sort of just falls out of this entity.  It’s an amazing moment that Orlando freezes in time.  Every new tidbit we get about Martian culture is interesting, but this will be a moment that will stand out in this series, as it beautifully illustrates the sanctity of life.  It’s a great example of how we should view creating life even if the biology of it all is a bit different.  Rossmo’s art shows the universality of something like this, because, while we could never create life in the way that they do, the decisions and emotions that went into it are the same as how we often feel.

For something to be described as an emotional roller coaster, there have to be peaks in valleys.  This isn’t a book like that.  This is an emotional free fall.  The book starts at the top with a beautiful birth but quickly descends into chaos.  The world, and almost everyone in it, is quite literally on fire.  There is a myriad of emotions swirling in J’Onn’s mind right now including fear, doubt, guilt, concern, and anger. He makes selfish choices that he claims are all in the family’s best interest, but M’Yri’Ah is confused, overwhelmed, and scared.  It’s a scene that practically never ends save for one small reprieve.  Every Big Two comic dreams of hitting highs and lows that make readers visibly and audibly react with emotion.  We read comics to experience our heroes successes and failures with them.  Sometimes creators achieve those emotions, and sometimes they don’t.  Martian Manhunter #6 succeeds to such a degree that it’s jarring.  It’s so viscerally emotional that it practically breaks the reader. You can’t help react in utter shock at how brutally chaotic this scene is and how brazenly selfish J’Onn is acting.  It’s hard to say what’s more horrific, Mars as depicted in utter chaos, Martian Manhunter’s disgrace, or how this redefined origin fits into J’Onn’s larger tapestry.  This is the glue that holds teams together, the one constant on a team of variables, a loyal friend until the end, and he had to rise to earn those titles from the deepest pits of disgrace.

The suffering endured by someone who loses a spouse and child is something no one should have to go through.  J’Onn has lived his entire life with his family being the single priority.  His job, reputation, and moral character were expendable but never the ones he loved.  He acted as though he was righteous, and in the end, the criminals he helped are the ones who bring him down.  The end is mostly conversational, and letterer Andworld Design uses a variety of skills to enhance the emotional effects such as intense, fiery SFX, shakiness in the world balloon tails, and important use of bold.  The sharp, jagged word balloons filled with panic and distress only further coveys the powerful, raw emotions that J’Onn is feeling as K’Hym and M’Yri’Ah are gone in a matter of mere moments.  Orlando’s voice truly shows an unhinged, desperate J’Onn J’Onzz unlike anything we’ve ever scene before.  This is a man feeling the greatest possible levels of mental anguish, and you feel every moment.

J’Onn certainly has a lot of explaining to do as some of Mars’s greatest criminals confront him to reveal that there are no escape pods.  All J’Onn can do is look back at the scared, betrayed faces of his wife and daughter in sorrow, which is ultimately what leads to his greatest loss. It’s heartbreaking and perfectly presented by nine inset panels over a splash page of J’Onn and his family.  It’s almost as if their scathing words about how J’Onn isn’t righteous in the slightest are prison bars caging him withing this world of destruction.  In comic books, mistakes often compound until they are too big to control.  What can be repaired and mended by ordinary people can easily get out of hand for a superhero so used to possessing control.  It is fear out of the situation that J’Onn has created that drives K’Hym and M’Yri’Ah back into the thoughtstream.  It is J’Onn’s mistake, betrayal, and lack of trust that drive them towards their demise.

In the end, the truth is out there.  Diane knows it all.   She knows what J’Onn is trying to accomplish and how seriously she takes this second chance, yet show only reacts by saying, “Yeah well, it’s… It’s a start. A good start.  The focus immediately shifts back to the present and the Ashley Addams case.  The only way for J’Onn to make the most of this second chance is to move forward, as hard as it may be.  Is this the bottom?  Will we finally see and upswing towards redemption, or does J’Onn have to sink even further to become the Martian Manhunter we know him to be?  We won’t know until the next issue.

Martian Manhunter #6 marks the halfway point for this immensely powerful max-series and displays the lowest point J’Onn has ever been in with an incredible amount of raw emotion, especially when witnessing the death of his wife and daughter in graphic detail.  We may be on Mars, but the emotions, the pain, the anger, and the guilt are feelings we can all relate to.  If you want a series that shows J’Onn J’Onzz is a way you’ve never seen before, continuing to add to one of the most brutal and powerful origins while breaking a man we’ve always known to be the pinnacle of strength, the Martian Manhunter #6 is definitely not one to miss.

There are no negatives.  This story is brutal, raw, perfection that will bring any reader to tears.

Orlando, Rossmo, Plascencia, and Andworld Design bring J’Onn to his lowest possible moment in what is sure to be one of the best single Martian Manhunter issues ever written.