Turned into Lords of Chaos by magic gifted from Mordru, Wonder Woman and Zatanna rush to stop the Lords of Order before they eliminate magic from the world forever! 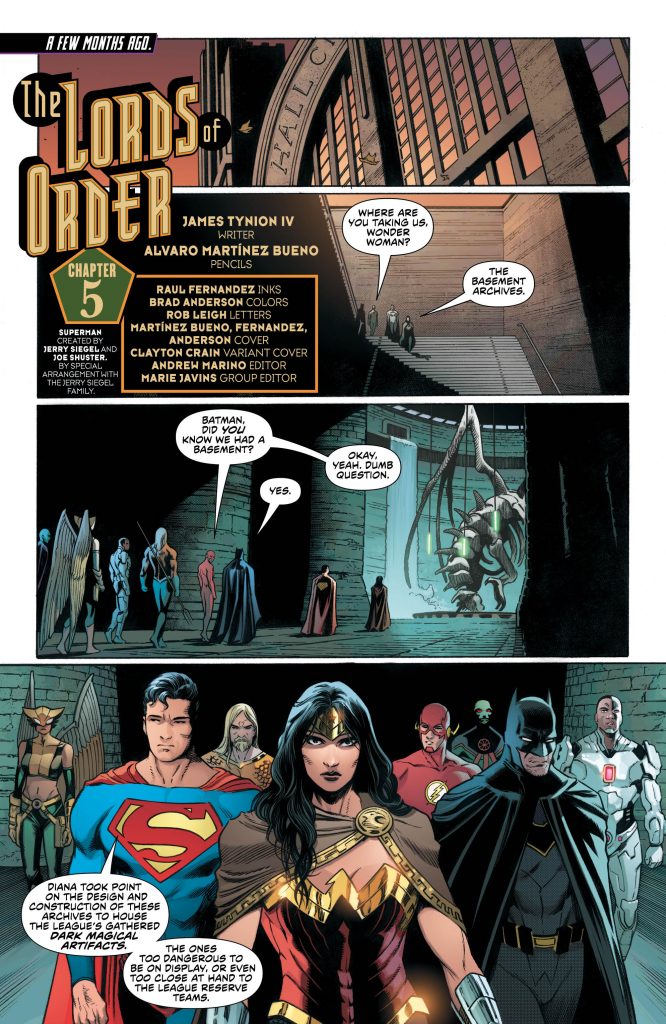 Magic has existed in the DC Universe for thousands of years.  Countless people have wielded it and transformed it in numerous ways, making it there own and accomplishing feats we could never imagine.  But it’s all about to come to an end.  For no one had enough power to combat the Lords of Order, no matter how powerful the greatest magic users on Earth were. Over the past 12 issues, James Tynion IV, Alvaro Martínez Bueno, Raul Fernandez, Brad Anderson, and Rob Leigh have crafted a magical web connecting various corners of the DC Universe with threads of magic they all share, but this issue determines their fate.  Either they find a way to fend off the Lords of Order, or magic as they know it is gone forever.  Does the Justice League Dark have what it takes?  Find out in Justice League Dark #12!

The Lords of Order have had a complicated history with the DC Universe primarily because they serve magic itself and not the people who wield it.  This primarily puts the Lords of Order on the side of the heroes, because heroes often know the stakes wielding magic can have and therefore do so more responsibly.  Occasionally, however, the Lords of Order, led by Nabu, will decide that the removal of magic from Earth altogether is more beneficial than allowing magic to potentially be possessed by evil, and that is where conflict arises.  The Lords of Order have decided to completely eliminate magic to eliminate the Otherkind, because they simply don’t have enough faith that humanity can combat this threat. It is up to Justice League to prove that humanity shouldn’t just be written off.  We have soared to great heights and new potentials far beyond what the rest of the universe has imagined, and unilateral control over magic like this is something the Lords of Order have typically opposed in the past.  It’s time for humanity to prove themselves, even if they have to break the rules to do it.

We open with a flashback that occurs before Justice League Dark’s inception.  It introduces the core them of this issue and the resolution to this arc.  Do humans, with a limited understand of magic, have what it takes or even the right to go up against larger, more ethereal beings? The issue alternates between these calm, conversational flashbacks, largely between Wonder Woman and Batman, and large, expansive action sequences with magic bursting from the pages.  Tynion and Bueno’s design work really shines through here as we see the full Justice League Dark Lords of Chaos on display with panel layouts, explosive movement,  an cinematic action beyond our wildest imaginations.  If you like large, over-the-top, but purposeful sequences of raw power reminiscent of scenes found in many different manga, this is the book for you.  This is a battle of raw power brilliantly captured by Bueno and Fernandez, who expertly balance the radiant light of the Lords of Order with the wispy clouds of the new Lords of Chaos.  Anderson’s colors only add to this effect, frequently mixing heavenly golds with dark, glowing, devilish reds and purples.  This may seem like a traditional battle between representatives from heaven and hell, but how did we end up rooting for the dark side.  Nevertheless, everyone is going all out in this issue in try to convey that every person involved in this fight has the power to bend reality and what that truly means for those involved.

This is clearly the result of a creative team working in absolute harmony as Tynion clearly trusts each artist to pull off wildly complex feats including panels that literally crumple and distort within the page.  It’s a display of raw power where one can only chuckle and marvel at the absolute ridiculousness of the forces at play here.  It’s incomprehensible how much power even one of them wields, let alone ten.  Rob Leigh only adds to the high stakes with some brilliant lettering that brings gravitas to the issue.  There’s plenty of SFX and unique character word balloons to take note of, but as always, the authority commanded by the dialogue from the Lords of Order is enough to give any reader pause.

Throughout Justice League Dark #12, the battle rages on through most of the issue with the primary casualty being the book itself.  How do you oppose a strict, authoritarian order enforced by all-powerful beings? By breaking the rules of course!  This holds especially true for traditional comics conventions as jagged, crumpled panels collapsing around the characters fill the issue. Only by breaking these rules can the Justice League Dark truly save magic.  It’s a darkness from these characters that we’ve never seen before and may never see again, but it does prove one thing.  Humans do have what it takes to stand up to Gods. 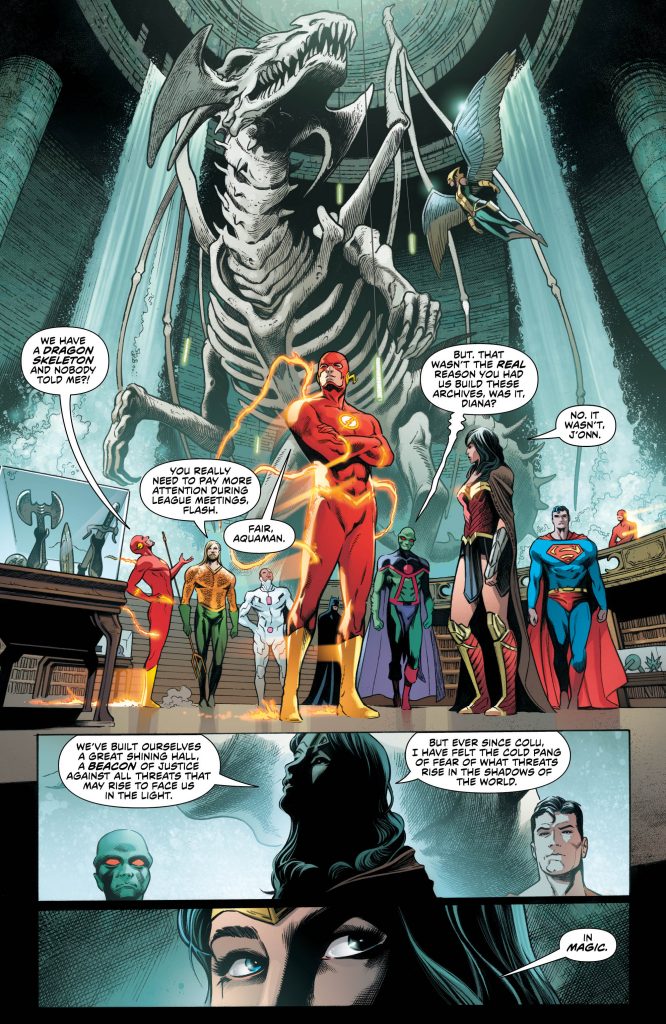 This book accomplishes what it sets out to do.  No negatives here.

Justice League Dark #12 closes its giant battle between order and chaos with high-octane action sequences, raw power, and a core belief in humanity, proving that the Justice League Dark do have what it takes to go up against the Otherkind.