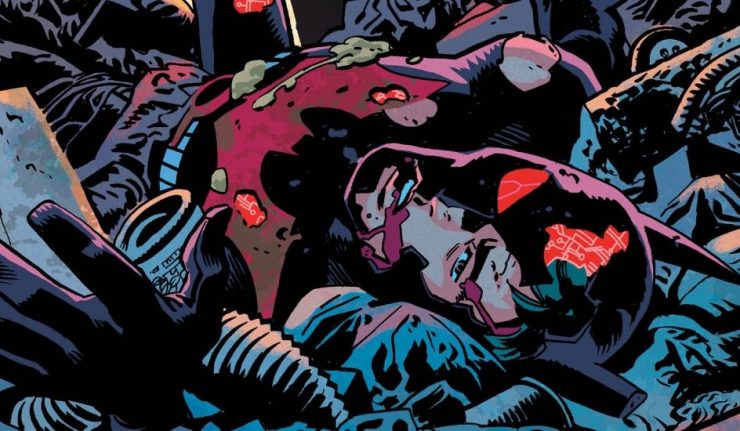 Batman Beyond #33: “Lost Daze” part three! Defeated at the hands of the Splitt, Batman radios for help. But Bruce Wayne doesn’t seem to have the same knowledge and experience Terry has relied on over the years from his mentor. Meanwhile, Melanie Walker tries to get to the bottom of everyone’s strange behavior by breaking into Arkham Asylum. Will she make a shocking discovery that will help Terry the way Bruce seems unable to?

In Batman Beyond #33, he has brought back a foe from the Batman Beyond cartoon: False Face. But False Face has a longer pedigree in DC history. He first appeared as a Silver Age Batman villain, but was most notably featured in an adventure of the 1966 Batman TV show. So, Jurgens manages to pay homage to multiple eras of Batman history in multiple media.

Although it has taken Terry and his support team awhile to realize something is up with Bruce, once clued in, they do an admirably efficient job of figuring out what exactly happened to him. Both Matt and Melanie prove their value to the Batman family, even when they are not in their costumed identities of Robin and Ten.

I quite like seeing an aging Bruce showing that he’s still a badass. Even though he’s a senior citizen with mobility issues, is trussed up in a straightjacket, is wearing a helmet that blinds him, and in an amnesic state, he still can take on two young and fit Arkham guards.

I also found it interesting that even though “Bruce” locks Terry and the others from accessing the cave’s computer system, Terry is able to override Bruce’s command. This means that Bruce would have had to at some point given Terry access equal to his own. This demonstrates how much Bruce has come to trust Terry. The man who had plans to take down each of his Justice League teammates has made Terry’s role as Batman irrevocable.

And if it weren’t bad enough that False Face has taken Bruce’s place, Jurgens has found a way to make the situation even worse. It now appears that he has taken Terry’s place as Batman, leaving Terry wandering the streets of Neo-Gotham with no idea who he is.

Leonardi and Parks have done a beautiful job. I especially like how they depict Neo-Gotham at night as well as their version of Terry’s Batman suit.

There isn’t much to complain about. It did seem to take a bit too long for anyone to pick up on Bruce’s odd behaviour, but the Matt and Melanie made up for that by quickly solving the mystery. Now it remains to be seen how long it will take them to notice that Terry has been replaced by False Face.

Batman Beyond may be set in the future, but Jurgens keeps it connected to Batman’s rich history. Not only does he keep it connected to the wider DC comics universe, but also manages to make it a true continuation of the cartoon.