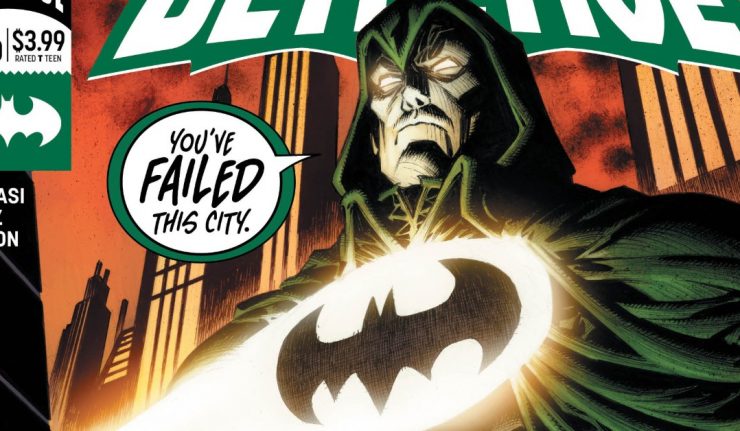 Detective Comics #1006 brings the Spectre back!  At the scene of a mob-style assassination, a group of Spectre-clad copycats kidnaps Jim Corrigan.  The Spectre turns to the Dark Knight Detective for help.  Neither are known for their ability to play well with others….

The Spectre hasn’t been seen in a while and it’s a real treat to have him back.  Batman and the Spectre seem like an obvious pairing, but they have different methods that don’t always mesh well together.  That said, Tomasi uses this as the basis for their working relationship.  What they do share are dark, moody atmospheres and rainy nights.  There’s loads of this in Detective Comics #1006.  Tomasi’s script is interpreted wonderfully by Kyle Hotz.  Even the opening panels with Corrigan and his partner at a diner ooze with atmosphere.  David Baron uses his palate to good effect as well, keeping the dark and stormy night intact.

The Spectre can be a difficult character to write because is so powerful.  His most recent series of appearances in Gotham By Midnight, saw him as part of the problem.  So far, this seems to be more of a classic take on the character, though one that will provide some insight through his interaction with Batman.  Batman’s portrayal is straightforward, eschewing any pathos; the Spectre’s grimness is enough for them both.  All in all, the tone of the issue is familiar and appropriate to the characters.  Tomasi’s approach to Batman is a refreshing change from the other Bat-books available right now.  He’s more of a man in a suit with a mission rather than an emotionally disturbed vigilante.

The mood and character are so good, it’s easy to forget that Batman and the Spectre are presented with a real poser- Who would want kidnap Corrigan?  Not only are they dressed like the Specre, but they keep chanting “the host must die, long live the host!”  Hopefully, this story arc will explore the Spectre’s current status quo.  In the original series, Corrigan was murdered and became a ghost himself.  In the ’70’s, he was the host to the Wrath of God.

The call out to Bernard Bailey, the Spectre’s first artist and Michael Fleischer, the Grim Ghost’s ’70’s scribe is a nice touch.  Maybe the Spectre’s creator, Jerry Siegel (of Superman fame) will receive similar acknowledgement in a future issue.

There’s nothing negative about this issue!

If you’ve been waiting to see a new story with the Spectre, wait no longer.  Mood and tone are the highlights of Detective Comics #1006 and it’s possibly the best issue of Tomasi’s run so far.  The supernatural world of the Spectre invades Batman’s Gotham City to great effect!