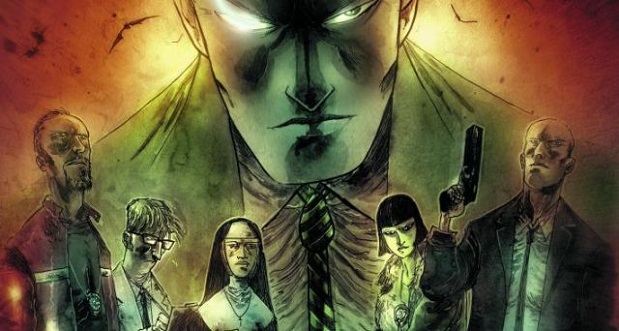 DC Comics has announced a new comic to join their throng of Gotham centric comics outside the realm of the Caped Crusader, titled Gotham by Midnight. On the new comic are writer Ray Fawkes, writer from Constantine and Justice League Dark alongside artist Ben Templesmith who is best kown for his take on 30 Days of Night. The new series is set to be reminiscent of The X-Files. Ray Fawkes has even given the GCPD taskforce, led by one Jim Corrigan, a special name: The Midnight Shift.

Another added force of nature behind this team is the fact that Jim Corrigan serves as a vessel for The Spectre. Ooooo (spooky ghost noses).

In an interview with Blastr, Fawkes had this to say about the new series and his intent with it:

“It has a very gothic, melancholy feel to it. There are a lot of stories that will be more supernatural than horror, but when you get down to the core of it, the things these characters face and the decisions they have to make are the kinds of things you’d see in a really great horror story…Jim Corrigan’s terrible secret is he carries the divine judgment of God around in his body, not of his own free will. So he’s better motivated than anybody to get involved whenever a big, supernatural monster shows up on the scene. If he doesn’t do something, sooner or later The Spectre is going to handle it, and he has an Old Testament way of handling things. We will be seeing The Spectre here and there, but that’s usually what happens when Corrigan messes up and doesn’t get it handled in time…another detective in the Gotham police force, and Corrigan’s partner in a weird sort of crew who skulk around in the night and chase ghosts. You will not have seen this Lisa before. There’s also a forensic investigator Dr. Szandor Tarr, a bit of a creepy dude but very reliable. Their religious consultant is a nun, Sister Justine, who has a very peculiar and particular talent.”

Ray Fawkes also expressed his enthusiasm with working with Ben Templesmith. Not only is he thrilled and excited that Templesmith is working on the comic, but he also feels that his design aesthetic fits the series perfectly

Below is some of the preview art for this upcoming series due out November 26, 2014.