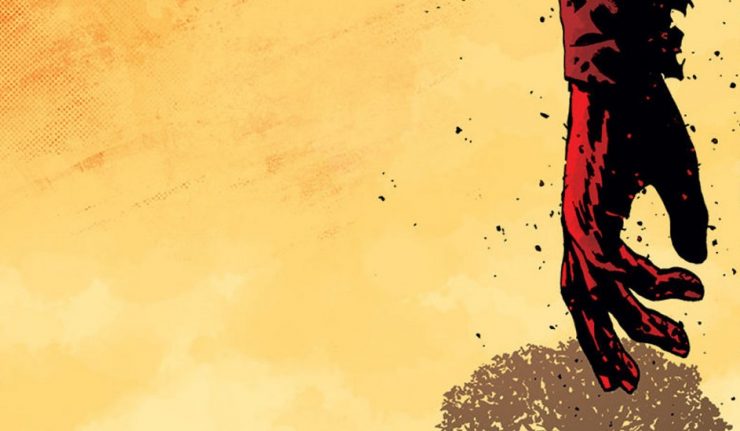 In a not too far off future, Carl Grimes deals with living in his father’s shadow and minting the new world his father built. After an act of desperation goes wrong, Carl must face the music in high court.

Saying goodbye is never easy, even to a beloved book such as The Walking Dead. The comic thrusts readers into a world we don’t truly understand. After all the gloom and torture our heroes have faced, we now enter a world where roamers no longer exist, and complacency has set in. Carl’s journey is one we can all relate to. Now a father himself, he is constantly reminded of how his father wasn’t just his, but instead was shared with this new world.

I thought this would get boring, but it truly did not. Readers can understand who Carl is now as a man. While we only got a taste of his day to day, we now know what he must deal with. The call backs and character cameos were great, including Negans fate. The final pages are filled with a deep and honest message from Kirkman.

The message is not only informative but truly moving for curious readers and long time fans.

It’s difficult to cram everything you want answered into a final issue. The series now leaves many things unsaid and questions floating in the air. Kirkman himself makes note of this in his final goodbye. What happens now? No one truly knows other than the creator himself.

I’ve reviewed a few final issues. They are never easy, typically we know months ahead and stories are crammed, and plot points are made to twist for shock value. We got none of that with The Walking Dead #193. Kirkman’s goodbye was a somber, but fitting end. A love letter to his work and to his fans, an enjoyable read for fans new and old. Much like Carl’s decisions in the story, Kirkman had to decide whether to keep his legacy safe or allow roamers to get closer and closer each time. Thank you for an amazing ride and an even better goodbye.