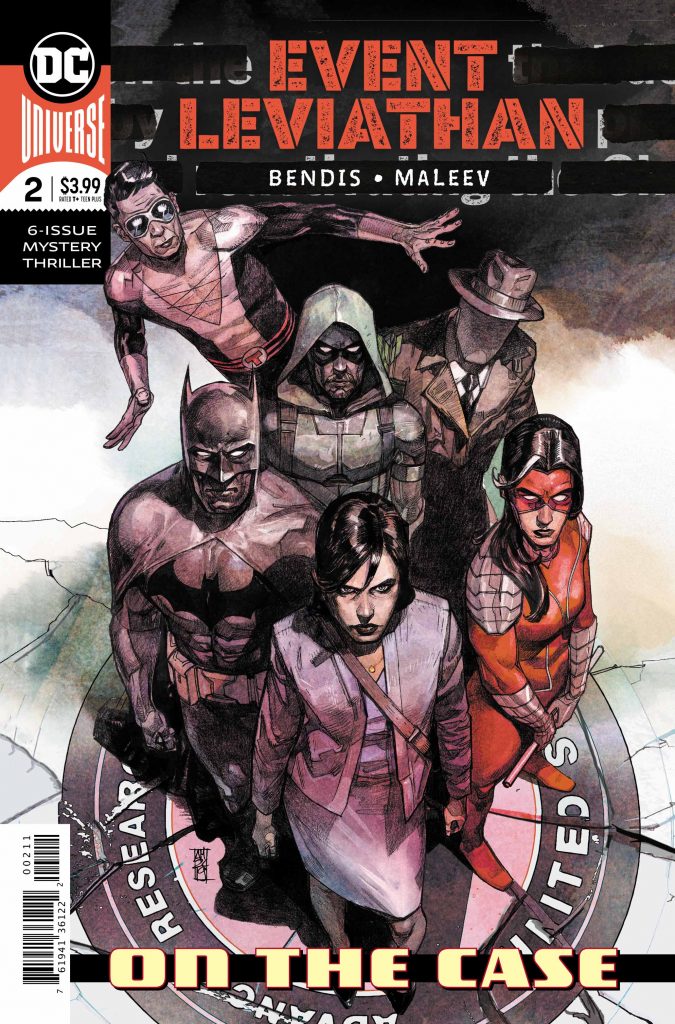 The espionage complex is in ruins.  All of the organizations that once existed in the shadows have all vanished without a trace.  Most of the world probably won’t notice anything’s wrong, but for those who do, they realize what a disaster this is, and one man is responsible: Leviathan.

Leviathan is an individual who has suddenly brought the infrastructure of the DCU to its knees.  They could be anyone whether hero, villain, or ordinary citizen, and are likely to be someone we already know.  Even the worlds greatest detectives were stumped for some time.  whomever Leviathan is, they have a deep and intimate knowledge of heroes and clandestine organizations within the DCU.  They’re resourceful enough to corner Plastic Man in a remote location, they’re bold enough to try and recruit the loyal hero to their cause, and they’re knowledgeable enough to fire off Plastic Man’s entire history and secret identity without a second thought.  This is someone who works deliberately and intelligently with no hesitations about getting to whomever and wherever they need to achieve their goals.  They’ve chosen a menacing, machine-like appearance and a name based on a famous organization created by Grant Morrison and David Finch.  They are Leviathan.

This story and event broke ground in the pages of Action Comics.  The foundation was planted and the stage set in Superman: Leviathan Rising #1.  The investigation began in Event Leviathan #1, and now it continues in this second issue.  There’s been a lot of teasing and hinting done in the meantime, intentionally keeping readers waiting in anticipation of some big reveal.  This is, after all, a vast, far-reaching story with a lot on the line.  Written by Brian Michael Bendis, the latest creator to have taken the DCU by storm, and joined by artist Alex Maleev, who’s dark, gritty depiction of some classic detectives and heroes fits the story perfectly, Event Leviathan is a story with a lot to say and a lot to prove.  Now add in the brilliant Joshua Reed and his masterful word balloon placements and striking sound effects, and you have a landmark story in the making.

Event Leviathan #2 is a beautiful issue.  Maleev’s art is bathed in the beautiful darkness of night.  The issue is covered in panels saturated with the same blues and grays you hate to see in your favorite TV shows and movies.  In this issue, however, they add a street level-grittiness unlike any Big Two comic out there.  The dark fight between The Question and Casey Klebba or the confrontation between Leviathan and Plastic Man are covered in a glowing blue-gray that screams “noir”.  The art has the atmosphere and tone of a crime comic while including some of your favorite superheroes.  Not only that, but you even get to see these superheroes acting and working as detectives, something rarely portrayed in today’s comics.  Just as these clandestine organizations used to do, this comic operates and thrives in the shadows.  It’s filled with secrets, shady dealings, and unknown entities unlike the bombastic supervillains we see so often.  These are actions that couldn’t take place in broad daylight.  The more people know, the less power they have and the smaller the advantage.  As we see through the evolution of Batman’s discussion with Red Hood throughout the issue, we have to trust no one, suspect everyone, and always be wary. 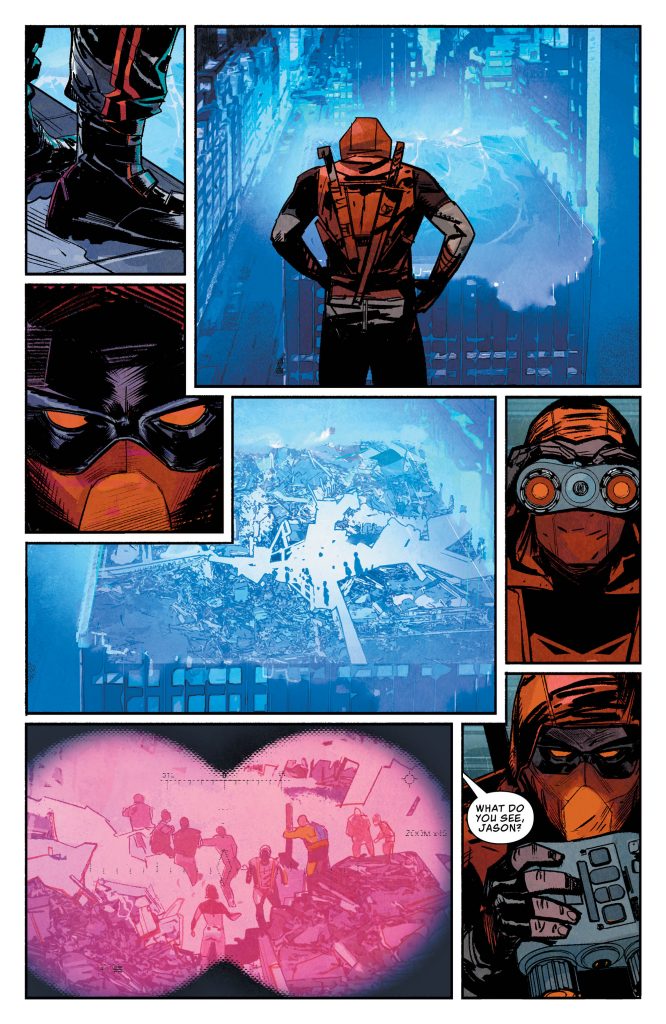 The book is framed through Batman’s nighttime narration of the investigation so far to Red Hood a.k.a Jason Todd, as Batman attempts to recruit Todd to this team of detectives.  Batman has rarely gotten along with Red Hood lately due to his methods, but reaching out like this shows a great level of trust… or so week think.  As their conversation evolves an unfolds, Batman recounts The Question’s experience protecting Sam Lane in the hospital as an eerie conversation takes place, and the panels slowly become washed in red.  We also hear of Plastic Man’s later confrontation with Leviathan in the cold, unfeeling morgue.  Casey Klebba, the common link, is a former A.R.G.U.S agent that seemed to be working for Leviathan’s cause.  People are changing sides, Leviathan isn’t dropping bodies as much as you may think, so what exactly is going on?

Batman, Red Hood, and the rest of the detective squad is a brilliant idea.  The fact that an incident occurs with The Question, continues with Plastic Man, and is relayed to Batman and Red Hood is so exciting to see.  Each character gets their own moment in the spotlight.  Each character is their own piece in a much larger puzzle.

After finishing Event Leviathan #2, it becomes obvious that Bendis, Maleev, and Reed really know how to tackle an ending.  The wide, cinematic panel of the detective squad coming together is epic and phenomenal.  It is a movie poster waiting to happen.  Bendis’s voice for Jason is flawless in these final moments as he goes down the line, seemingly hurt and taken aback as he has to come to terms with the idea that he’s the primary suspect for being Leviathan.  The two rows of seven panels are brilliantly drawn to showcase Red Hood’s confusion and frustration.  Bendis and Maleev get these characters spot on in what is essentially an interrogation before one of the most badass and subversive moments Bendis has created since arriving at DC.  The final question asked by Vic Sage himself is simply “Why?”  Jason’s response as he jumps off the rooftop in an attempt to make a quick escape is the impeccably delivered line “wrong question.”  It’s brief but packs so much mystery within the possibility of that line.  It’s why The Question has become known for that answer, because the logical follow-up is, “Well what is the right question?” and that’s always up to the reader to figure out.

Ultimately, Event Leviathan #2 remains a book worth buying for Maleev’s art alone as he unleashes his talents on the espionage epicenter of the DCU.  Along with comes fantastic lettering from Joshua Reed, exciting character moments, a few theories to hold onto, and a very exciting finale. 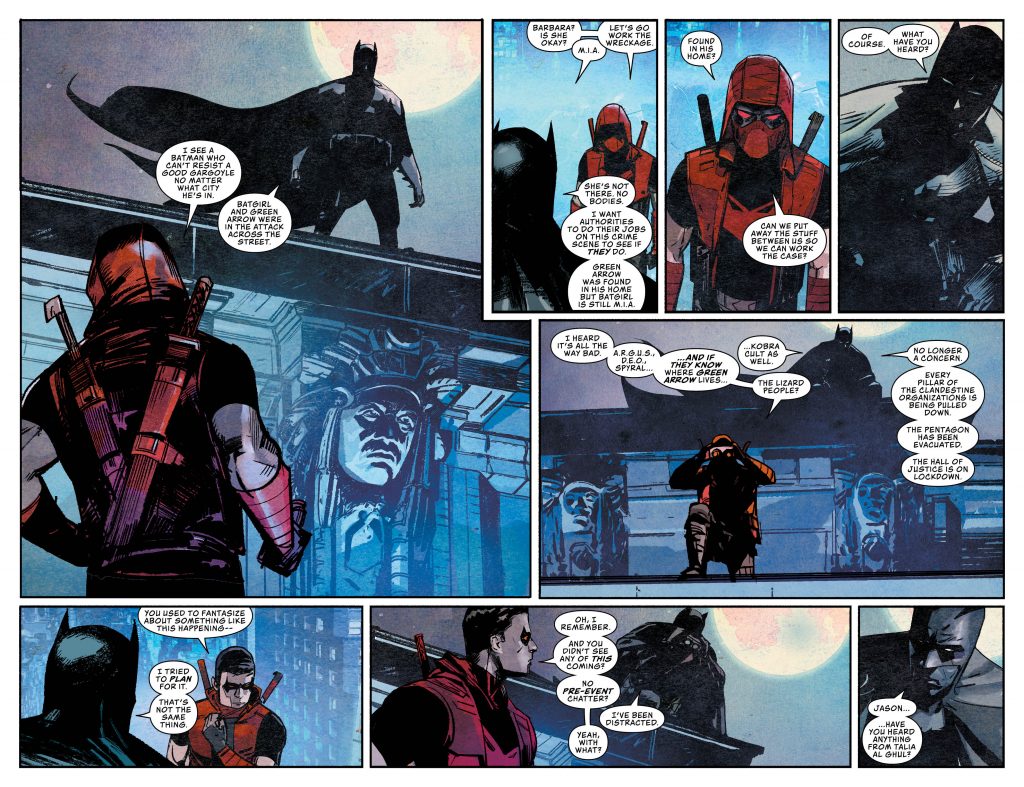 Unfortunately, the teasing is part of the problem.  Issue after issue, we’re left on the edge of our seats waiting for a payoff or something to happen, but after four issues now, it doesn’t like anything’s coming.  There is so much decompression throughout this event that it begs not to be read until the trade paperback comes out.  If you’re reading issue by issue, there’s nothing more disappointing then getting to the end and going, “Is that it?”  Time after time, that’s the most common phrase after finishing one of these issues.

Event Leviathan is essentially one giant mystery, but it falls short in delivering a lot of those elements.  For a mystery to work, the readers have to find out clues along with the key detectives. We aren’t given new, useful information, but rather new, dramatic information.  The new actions and scenes we see within the issue do not give the reader many clues.  It doesn’t feel like we’re any closer to solving the mystery.  This could be coming from a personal sense of frustration, but these confrontations don’t provide physical clues, only dramatic moments.  There don’t appear to be any easter eggs or hints in the corner of certain panels, only shrouded confrontations that actually reveal very little.  It used to be a bit more excusable because it felt as though the reader knew what the detectives knew.  Now, however, it feels as though these heroes have leads, theories, and evidence that we don’t.  We aren’t on this investigation with them but instead playing catch up.  As a result, the feeling of decompression hits hard.  There’s a frustrating lack of answers and information, and a maddening amount of repetitive information.

We are one-third into the real, meaty event here, and it still feels like setup, and that’s a real problem.  Tracking down leads is a big part of solving a mystery, but it’s easy to become detached if you aren’t feeling a part of that mystery. It’s so reliant on characters relaying information from one person to another that you just feel like another link in the chain.  Just like any chain, there are strong links and weak links.  Event Leviathan #2’s characterization is a lot better than Event Leviathan #1.  Batman has vastly improved, Red Hood is strong, and the Question is as mysterious as ever, but every chain has its weak link, and this one’s is Plastic Man.  Bendis doesn’t seem to have really chosen a definitive take on the character.  The absurdism isn’t there, and neither is the reformed criminal element.  Instead we get a sense of this humorous, funny-man detective who seems more like a comical Elongated Man than anything else.  So far he’s just incited confusion among readers, and this doesn’t clear things up.  For those of you hoping for answers on Leviathan in this issue, you may have to wait a bit longer, as for now, a theory will have to do.

A solid continuation filled with frustratingly little information, Event Leviathan #2 remains an issue where you come for the spy drama but stay for Alex Maleev’s beautiful art.