…the main villain of the upcoming DCEU New Gods movie, according to director and co-writer Ava DuVernay. She took to Twitter to answer fan questions while promoting her TV mini-series When They See Us; the subject turned to the New Gods, which DuVernay is scripting alongside Tom King.

When a fan asked about the Lord of Apokolips, the answer came back simple and direct:

Another person sent a question about the Female Furies, Big Barda’s crew from the time before she met Scott Free:

When the subject turned from villains to casting, which is still in the most preliminary stages, DuVernay had this to say: 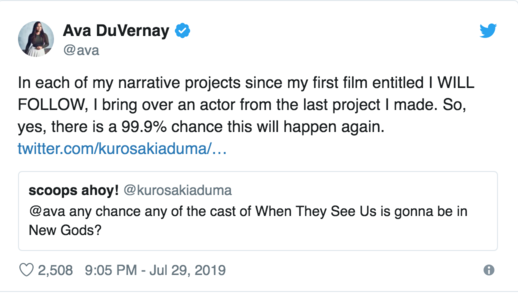 Black Lightning Characters To Appear In Crisis On Infinite Earths