Review: Batman And The Outsiders #4

Review: BATMAN AND THE OUTSIDERS #4 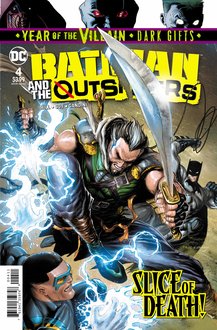 Batman and the Outsiders #4: At last—the Outsiders take off on their mission to rescue Sofia from none other than Ra’s al Ghul! But Ra’s has other ideas for the quartet, and with the aid of Lex Luthor’s mysterious gift, they are playing right into his hand. 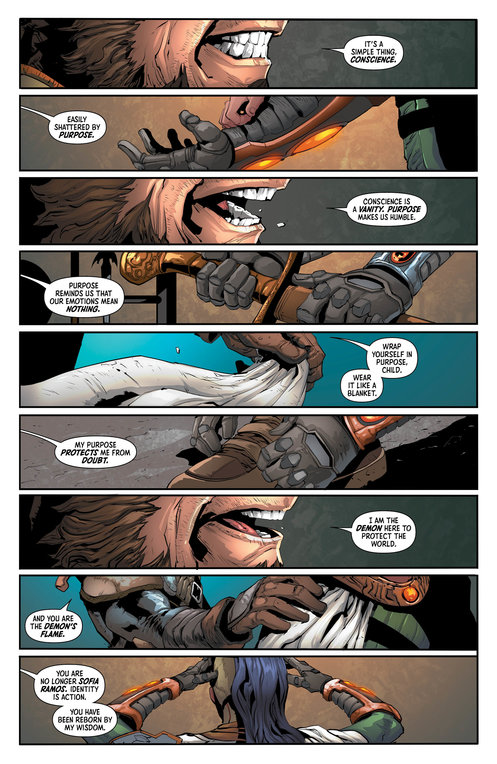 There’s a lot to love with this book. Finally the team are taking off on their mission but this is one big set up for what will presumably be an action packed issue next time. And yet despite the dialogue heavy pages this is a fun issue. Bryan Hill is capable of making just about anything interesting and the way in which he grounds his Outsiders team with a philosophical quarrel between Batman and Black Lightening is incredibly interesting.

Throughout the issue readers get the impression that the two ‘leaders’ are butting heads in regards to leadership styles. Black Lightening always comes across collected and believable, in many ways acting as a reader stand in. Before you have a chance to think “I would say this in that situation” Black Lightening has already said it. His interactions with each Outsiders member serves to build individual characters but everything strengthens the image of Black Lightening as a strong and moral man.

One of the best things about these interactions is getting to see Bruce Wayne playing his party boy image. Bruce is probably testing Black Lightening more than anything, using this meeting as a test for him. As readers we understand who Batman is and why he would likely do the things that he does and this added dramatic irony helps again to build Black Lightening as he responds to Bruce in believable and identifiable ways.

Particular praise has to be paid to Dexter Soy’s artwork and the complimentary colours by Veronica Gandini. Even if it is an issue comprised of mainly dialogue scenes, the two manage to make each just as engaging to read as an action sequence. Dexter Soy’s style works really well with the tone of the book. 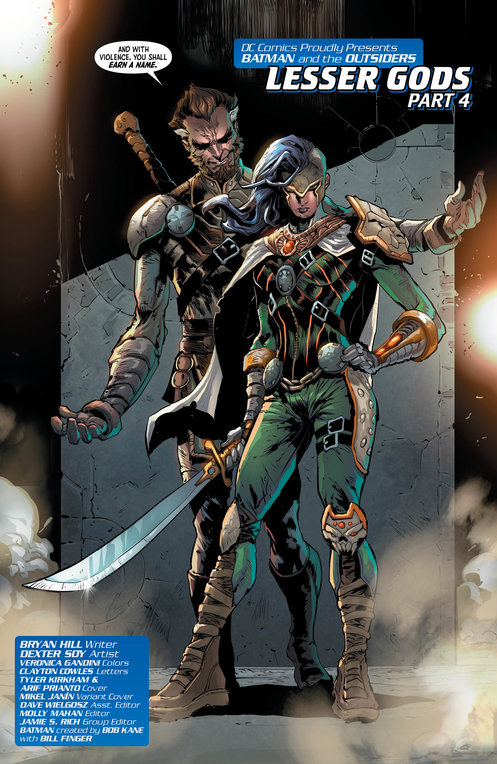 Four issues in it’s easier for readers to pick up on what they like and dislike with the series. Overall this is a pretty great issue so any negatives sound like nitpicks. But that doesn’t make them stand out any less.

One problem that sticks out is Black Lightening’s seeming perfectness. While it’s good to ground the team with a strong leader, there are issues with how easily he responds to everyone. His reaction to Batman as Bruce Wayne is a clear pass for Bruce’s test, his mentoring of Duke, his response to Kaliber’s internal strife as well as Katana’s. The man is perfect. Towards the end of the issue during his conversation with Katana, she picks up on the main theme of the book; Batman is a general who sees soldiers while Black Lightening is a teacher who sees students.

It would be good for the series to explore this philosophical debate throughout the Outsiders’s missions but currently with Black Lightening as the main protagonist it’s hard to ever disagree with him. In fact Batman comes across cold throughout which obviously is pretty good characterisation for this viewpoint readers have, but it would be great if in in the future the series challenged each character rather than present one style as objectively good and another objectively bad.

Batman and the Outsiders continues to deliver as one of the more thoughtful team books out. As the team finally set off on their mission we understand who the team really are. As a testament to Bryan Hill’s writing, it is just as exciting to witness the outcome of the mission as it the mission itself.