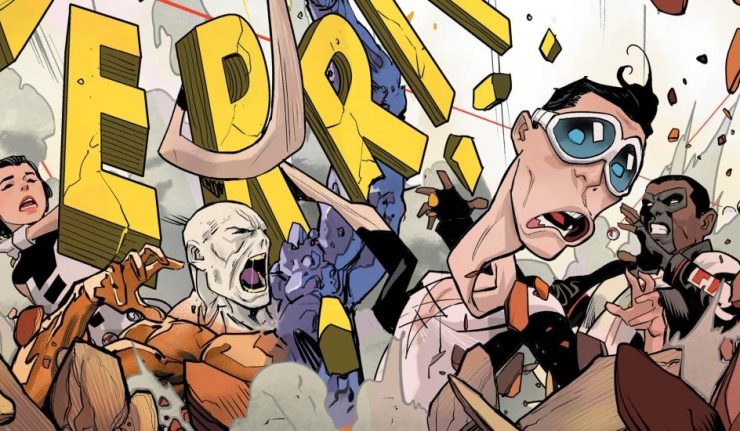 The Terrifics #19: Somewhere in a twisted, distant corner of the Multiverse, up is down, back is front, a smile is a frown—and Bizarro is king! But light is the head that wears the crown, and Lex Luthor’s offer of time manipulation has given our villain a new purpose: to turn back the clock on creation. To win, Bizarro must enlist the help of the only team that could tackle a task such as this: the Terribles!

Bizarro stories can be a lot of fun if they are done right, so Bizarro makes an ideal villain for the Terrifics to contend with. The Terrifics has been a shining beacon of fun in the DC lineup, and a Bizarro story provides ample material for an amusing offbeat tale.

A Bizarro tale can be rather tedious if the writer does little more than have Bizarro talking backwards and causing accidental damage. I much prefer when the writer does something new or different with the character, and Yang doesn’t disappoint.

First off, Yang introduces us to some of Bizarro’s enemies. These are opposite versions, but not in the way you might expect. They are not just mirror opposites, but rather flawed versions of the originals: Rusty Metallo, who sneaks money into the banks; Broken Toyman, who steals Bizarropolis’ precious garbage; and Beneficial Parasite who gives superpowers to ordinary citizens.

I also love that Yang refers back to Bizarro’s recent history in Tomasi’s run on Supeman. It’s nice to know that Boyzarro hasn’t been completely forgotten. I also like some of the additions to Htrae’s citizens, especially Dr. Magnuts and his Metazarro Men.

Of course, the most important of these is Mister Terrible, who is the Bizarro version of Mister Terrific. You might think that Mister Terrible should be the third dumbest person on the planet, but actually he seems to be smarter than the average Bizarro. This is evident in his speech pattern, which is mostly normal English with just a touch of backwards-talk.

We also get a peek at Mister Terrible’s team, the Terribles. It’s interesting how the Terrifics are facing another team that is an opposite version of themselves. But the Dreadfuls were an evil version, where the Terribles are a flawed reflection.

Max Raynor did a fabulous job of capturing the surreal atmosphere of Bizarro Earth. I was impressed at how he was able to transform Htrae into a technologically advanced world, yet still keep it recognizable as Bizarro-Earth.

Also, the reversed sound effects were a nice touch. Especially when the Bizarro Blue Beetle barfs with anxiety: “!KCUHCPU”.

Ms. Terrific tells us that she’s going to be returning to her own Earth. I had hoped that she would be hanging around for a while. However, she hasn’t left yet, and it looks like she’s going to be caught up in the fight with the Terribles, so her departure isn’t final yet. Hopefully, she will have a change of heart.

Whenever a new issue of The Terrifics comes out, it’s always the first book I have to read. Jeff Lemire created something special with this title and the quality hasn’t slackened since Gene Luen Yang has taken over the reins. As Bizarro might say: The Terrifics am worst DC title! Me hate it!