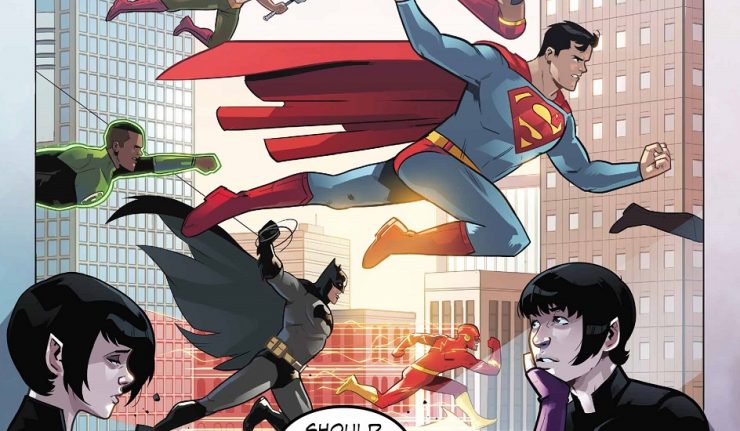 In Wonder Twins #7, we ask the question: Why do heroes do it?  Heroes save the world every day, for something to happen all over again tomorrow. Sometimes it’s hard to even find the motivation. Nevertheless, it’s a job that has to be done, and Mark Russell, Stephen Byrne, and Dave Sharpe take a close look at why heroes do what they do, and what keeps them going.

The heroes saved the day, and the Scrambler’s in jail.  So why doesn’t it feel good? Zan’s soaking in all of the praise while Jayna has lost her best friend, is demoted from her status as a hero to a tour guide for the Hall of Justice, and is just feeling a little lost.  Enter Repulso, a hero who smells so bad that he’s locked away except for when he’s needed to disperse people.  His actions teach Jayna that being a hero can be a thankless job, but it’s still one that has to be done. It can be lonely, and people may hate you, but doing the right thing is always the answer.  It’s played out through a phenomenal moment between Jayna and Superman. and the final panel of Jayna as an ant with no sense of smell playing stratego with Repulso is a great one.  Don’t worry, however, because if you think this issue might be a downer, you’d be wrong.  It ends on a hopeful note, and throughout the issue Zan is on cloud nine.  He is living the high life after tipping off the Justice League to where Scrambler and Polly were located, so he’s ecstatic but maybe at the expense of his sister.

As always, Russell is able to perfectly match the humor with the heart to deliver a funny and exciting comic with a great message.  The Wonder Twins have a place in the DC universe and in the comics zeitgeist, and Russell is showing how to pull it off.  They’re learning to be human along with the rest of us, and that’s what’s great about this comic.  They’re going through what we are, but they’re expectations are higher.  That means if they can do it, we can do it too.

Stephen Byrne’s art continues to be the perfect fit for this title, with his youthful cartoon style able to match the atmosphere Mark Russell is creating with his words. You can see the twinkle in their eyes whenever someone smiles, and with new additions like Repulso, the Scrambler, and various other small characters, Byrne always has something new to draw in his own way.  He’s especially great with branding.  All of the sports teams, posters, billboards, and other various logos or signs look fantastic and will definitely make you laugh if you notice them.  Sharpe’s lettering matches this style perfectly and is able to shine thanks to a variety of SFX, exclamations, and signage.

No negatives here!  This is a fantastic book.

Wonder Twins #7 proves why the title deserved to be extended with Mark Russell, Stephen Byrne, and Dave Sharpe delivering hard-hitting moments, plenty of heart, and a whole lot of humor.