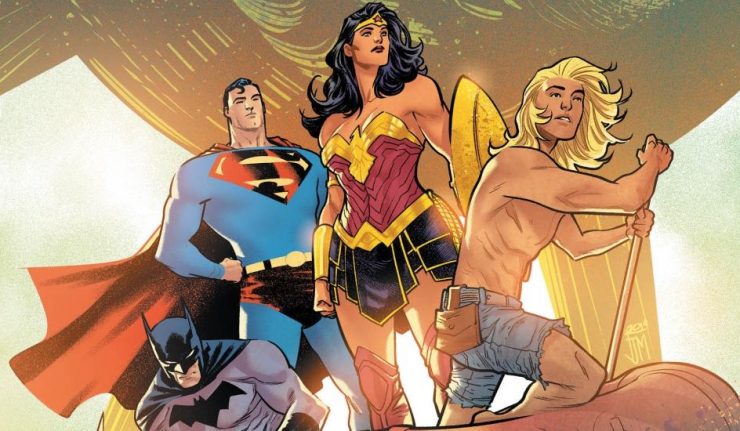 Justice League #32: “The Justice/Doom War” part three! Things are getting dangerous across the time stream. On one side of time, the Justice League team finds heroic purpose; on the other, it’s a future full of chaos and trial. It’s the Totality in action. If they can’t stop Lex’s Legion across all fronts, there may be only one other option: embrace Doom!

We’re now in the thick of the Justice/Doom War, with the League fighting the Legion of Doom on three fronts: the past, present, and future of the DCU. While the excitement is palpable in all three eras, I find the battle in the past most interesting – mainly due to the presence of DC’s first super team, the Justice Society.

The Flash and Green Lantern of the current day Justice League are meeting with the heroes that first bore those names. There is still the mystery as to why the Leaguers have never heard of the JSA, which is acknowledged, but not expanded upon. Likely that question will be resolved in the pages of Doomsday Clock, but it’s great to see the JSA back in action.

But that’s not the only return. While fighting the Legion of Doom at the attack on Pearl Harbour, Aquaman shows up to prevent the Legion from making off with a piece of the Totality. But wasn’t Aquaman shown working with the Anti-Monitor last issue? Well, more on that in a bit.

In the future, Batman, Superman, and Wonder Woman meet the Justice Legion A, comprised of the heroes from DC One Million (and Kamandi). I guess with DC’s foremost team of the future tied up over in Bendis’ Superman family of titles, Snyder and Tynion had to make due with another Legion from the future.

However, the 853rd Century heroes might be more appropriate for this event, considering that their team is composed of futuristic namesakes of the Justice League. It brings back the concept of legacy to the DCU to see the same identities carried through the ages by successive generations, like Starman or the Flash, who are represented in all three generations shown in this story.

The feeling of legacy has been largely missing since the New 52 reboot, which established the modern Justice League as the first generation of superheroes, wiping the JSA out of continuity. But by bringing the Justice Society and the Justice Legion A back, Snyder and Tynion have reaffirmed that legacy is something that matters in the DCU.

In the present, Lex Luthor and Perpetua seek out the Anti-Monitor, to enlist him in their fight to control the Multiverse. Unfortunately, he has a surprise for them and us, delivering the absolute very last statement you would expect from the villain behind the Crisis on Infinite Earths: “The Anti-Monitor sides with Justice!”

I know that the League was seeking to enlist the Anti-Monitor to the cause of Justice, but to just have him declare himself on their side is rather anticlimactic. It didn’t even require an impassioned speech to win him over. And given that this is a 180 from his villainous past, I certainly hope that Snyder and Tynion are going to delve further into his motivations for this.

Other than that, the only problem I have is that there’s so much cool stuff going on, that could have been full events in their own right. For example, even though it would drag the overall story out longer, I do wish that they could have dedicated a couple issues to a full Justice League/Justice Society crossover, with the full lineup of both teams. However, once the JSA is fully restored to continuity, I am sure that it won’t be long until we see such a meeting of titans.

Of all the different universe-shattering Crises in the history of the DCU, none of them have come close to matching the mind-bogglingly grandiose scale of the original Crisis on Infinite Earths. But, now Snyder and Tynion have not only matched this scale, but have taken us past it and to a whole new level. They have taken the League into uncharted territory, and I’m loving every minute of it.