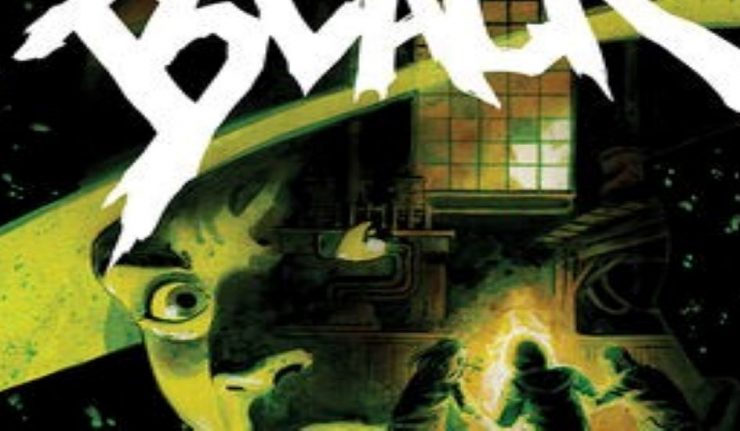 Manor Black #3 starts with Ari and Mr. Black discussing her inability to control her power and the fact that she is convinced her Totem is loosed in the world. Hence, all the spontaneous combustion incidents around town. Of course, as things would have it, that creepy guy in the mummy costume actually has control of her powers and he is burning everyone up. Death by magic fire sounds pretty terrible for sure.

Meanwhile, the local police have multiple murders and fires to investigate. Is it murder by arson? It sure seems that way. I would to be them.

Ari eventually runs away and finds her fire power (literally) in the hands of another. What will she do? That remains to be seen.

Manor Black #3 is once again held up on the back of Tyler Crook. There is something about the way he paints his panels that make each panel a masterpiece. He know exactly when to shade and when to brighten. He knows when to leave halos of color and when to bring focus to an object. The text is often petty dense in this book, so one might forget to take a break and look. Remember, this is a visual medium.

Speaking of that dense story, there are multiple layers happening. The police officers who are trying to solve a mystery seem way out of their depth, yet, they are also the most interesting characters. Maybe because we readers are mere mortals, but there is a connection there as though the cops are the avatars for us. Trying hard to keep up, but maybe not prepared enough for the battle ahead.

There are a lot of rules in this world. Wild magic and house magic and the like. I think the team is doing a good job trying to roll it out slowly, but there is such a thing as taking it too slowly. There is always a risk of explaining things too much, but again, this is a visual medium. Show, don’t tell. You have Tyler Crook there to show us all kinds of things with amazing skill. There are some panels that do wonders for the plot without one word being uttered and then there are others where we feel bogged down with trying to remember all the rules.

Manor Black #3, is a strong outing for this young series. Plots do take time and Dark Horse is well known for letting creators take control. This is clearly the story this team wants to tell. I do worry that there are too many plots. Clearly, the title indicates that the family drama at Manor Black is key, but Ari and the Harvey are more interesting stories. Time will tell and this book deserves time.