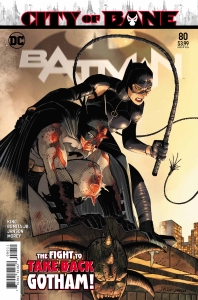 Batman #80: The bad guys thought they had it made with Bane in control, but with Batman back in Gotham they’ll be reminded what justice feels like…and how it hurts when it hits you in the face. With Catwoman at his side, the Caped Crusader is looking to take down Bane’s army and reclaim his city. But what happens when old allies like Gotham Girl also stand in his way? The legendary art team of John Romita Jr. and Klaus Janson join BATMAN for two action-packed issues that will rock Gotham City to its foundation.

Batman and Catwoman have returned to Gotham City and have started the process of retaking the city. They start by taking down the costumed criminals aligned with Bane. Ordinarily, it would take Batman an entire issue or even a multipart storyline on their own, but Batman ploughs through each of them as easily as if they were Kite-Man.

Batman here in his full glory as DC’s supreme badass. Bane has broken Bruce as completely as one man can be broken. As Hugo Strange tells us, “What that man experienced… he was broken. I have no doubt. No one comes back from that.” Except Batman has, and he’s even more of an unstoppable force as before.

And as much as it seems that Batman should be wreaking bloody vengeance for what Bane did to Alfred, he seems to be collected and methodical in his decimation of Bane’s allies. Is he suppressing his anger, to deal with after he has dealt with Bane?

In light of some subtle hints dropped last issue, I suspect that the rumours of Alfred’s death have been greatly exaggerated, and that Clayface or the Martian Manhunter took his place and feigned death.

Or could it be that his restored relationship with Selina has allowed him to get tighter control on his anger, giving him the clear-headedness he needs to deal with Bane and his cronies? I suspect that this is also part of the equation. If this issue is any indication, then Bruce appears to be stronger with Selina than on his own. 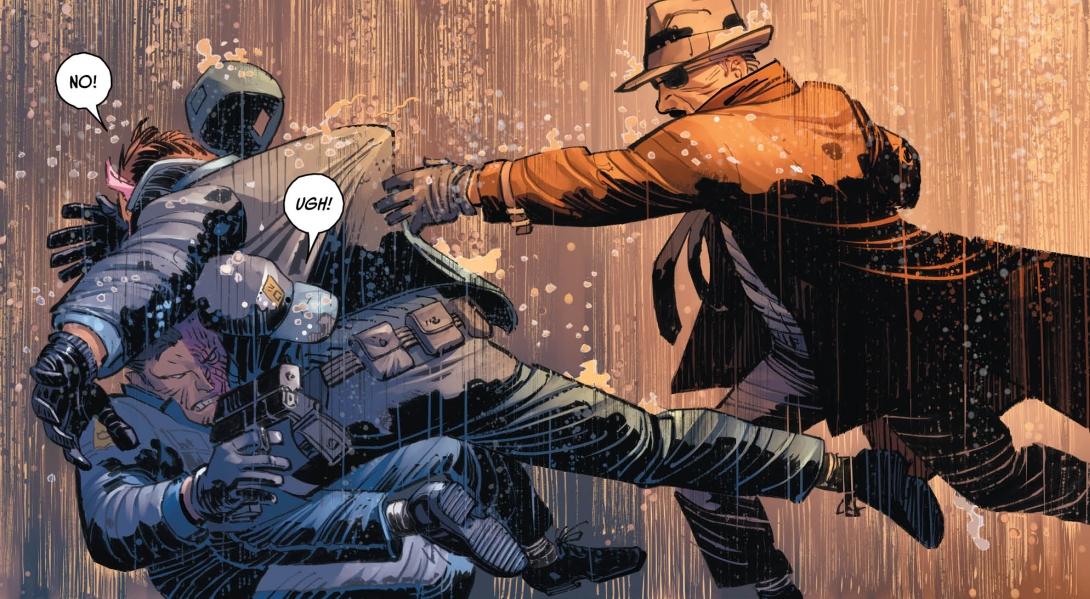 As a cat-person, I was quite pleased to see Catwoman preventing Mad Hatter from victimizing a cat. It’s always great to witness an animal abuser get their comeuppance.

Bruce seems to be counting on the Flashpoint Batman having a change of heart, or at least to be unable to kill his “grandson” Damian. Batman deliberately sent Damian in to be captured, and realizes that his own return to Gotham will cause Bane to order Damian’s execution.

But Bruce doesn’t seem to be worried when he tells Selina that he is unable to save Damian from Thomas Wayne, calmly stating, “So now. I suppose… Father has a decision to make.” I can’t imaging that Bruce would be so calm unless he was certain that Thomas will make the right one.

And I think he might be right. We see that the ersatz Thomas Wayne has taken an almost paternal role to Gotham Girl, tending to her in her weakened state. Also, he makes a promise to her when she asks if she’s going to die, “No. But for what he’s done to you… he will.” But who is Thomas Wayne referring to, Batman or Bane?

And the art team of John Romita Jr. and Klaus Janson is stunning. Janson inked Frank Miller’s pencils on the Dark Knight Returns, and his work here evokes the mood of that classic Batman story. And John Romita Jr. is a legend in his own right. Batman #80 is worth picking up just for the artwork alone.

With a top-notch story and superlative artwork, there is literally nothing I can find in this issue to express any disappointment in. Kudos to the creative team! 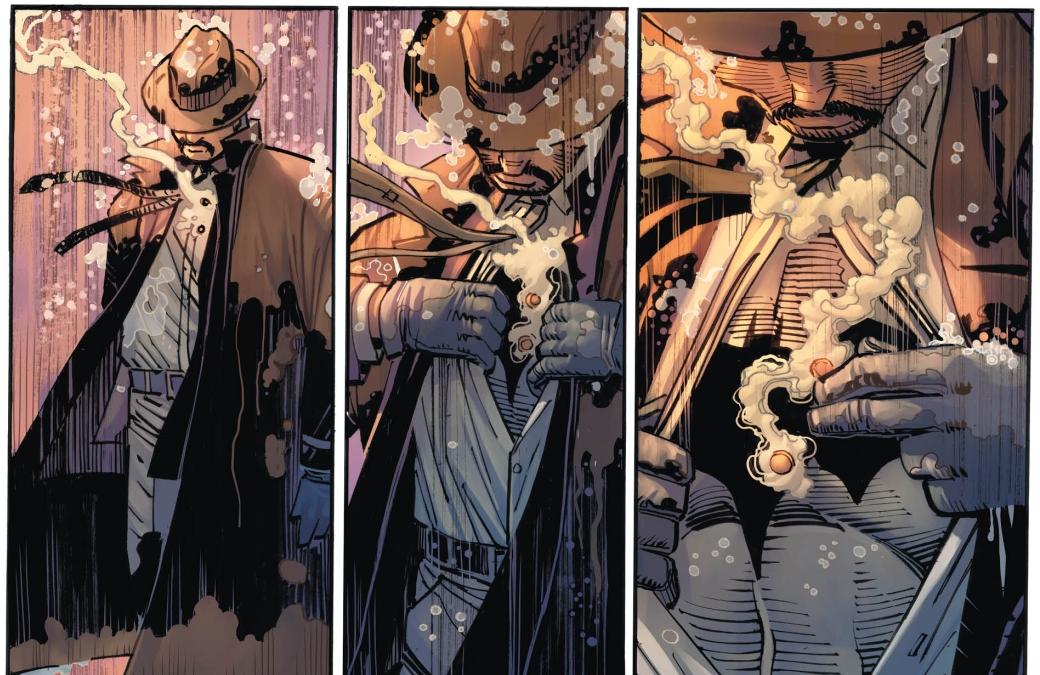 Tom King’s run has been polarizing amongst the readership, but the last few issues should be heartening to any Batman fan. Let’s hope he can keep it up as the City of Bane storyline continues.

Review: Superman: Up In The Sky #4