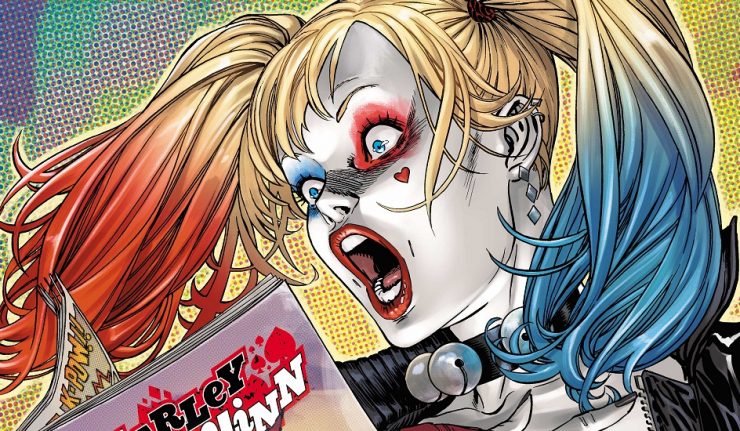 Harley’s finally completed all of the trials. Harley Quinn #66 shows us how she deals with being given incredible cosmic powers. It’s about as well as to be expected.

Harley finally becomes the Angel of Retribution, and gets closure with her mom. This issue is a little hectic, but really hits home with some great comedic effects.

It was nice to see the way that Humphries finished up two story arcs in one issue. The trials of Harley Quinn, and the death of her mother. What Harley does immediately after gaining incredible cosmic powers is something that only she could have done.

I love the way that Humphries handled the Lords of Chaos and Order, the way they bickered like an old married couple made perfect sense to me!

Then there’s the interaction Harley had with her mother. I’ve loved their relationship from the very start, and seeing it come to an end is emotional. What I love about the way Humphries writes it, is that he adds some humour to the situation. The page where the two of them are trying, and failing, to say goodbye made me crack a smile through the tears.

Right, so my biggest gripe with this issue is the fact that it seems to jump from one place to the next. There’s no real flow of reading, I can understand that’s maybe how Humphries wanted it to seem. The Lords of Chaos and Order, and Harley definitely leans into the chaos element of that. It just feels very jump cut to me.

In addition to that, Harley is the Angel of Retribution for all of thirty seconds before giving it up. I’d like to have seen her try and ‘maintain  the balance of the universe’ for at least a couple of issues. Bring back Jonni DC and have the two zipping and zooming around the DC Universe.

I just think there was a lot of wasted potential here.

Overall, unfortunately a more average issue of Harley Quinn this time. I’ve been thoroughly impressed with the creative team’s work recently. But this issue just felt a little lack lustre.

I can’t quite put my finger on it. But it was definitely missing that something special that the other issues had.

What Humphries does do very well however, is blend the heavy with the comedy. Basri lends themselves to that as well, with the outlandish facial expressions while a heavy emotional scene is taking place. Hi-fi do another fantastic job with the bright, almost cartoony colours that is a staple in any Harley Quinn issue.

Where they go from now, is anyone’s guess though.