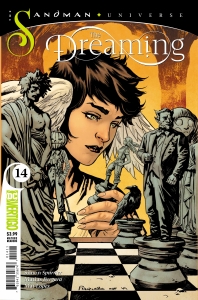 The Dreaming #14: To learn the truth about who she really is, and settle a debt most infernal, Dora must play a game with herself, and triumph in a contest of strategy against the demon Flauros, Hell’s wiliest mind. Oh, and did we mention that demons always cheat?

There is a common trope in fiction that shows a protagonist engaging in a contest with the Devil or a demon. In fact, in Sandman #4, Neil Gaiman had Morpheus compete against the demon Choronzon to win back his lost helm of office.

The Dreaming #14 shows us Dora similarly challenging the demon Flauros to a game of game of his choice, in hopes of winning an unspecified boon. Although Dora doesn’t have a soul to wager, she offers the servitude of her lover, the demon Balam.

Flauros presents her with a seemingly unbeatable challenge by choosing to play “the Keening.” He declares of this demon game, “No terrestrial set can contain it! No full rules may be written!” Plus, Flauros has only ever been beaten once before.

We have seen in previous issues that Dora is crafty, but in this issue, she proves to be absolutely brilliant, and more than a little devious. She manages to win the game in an ingenious method that I won’t spoil here. You will need to read it for yourself to fully appreciate it. 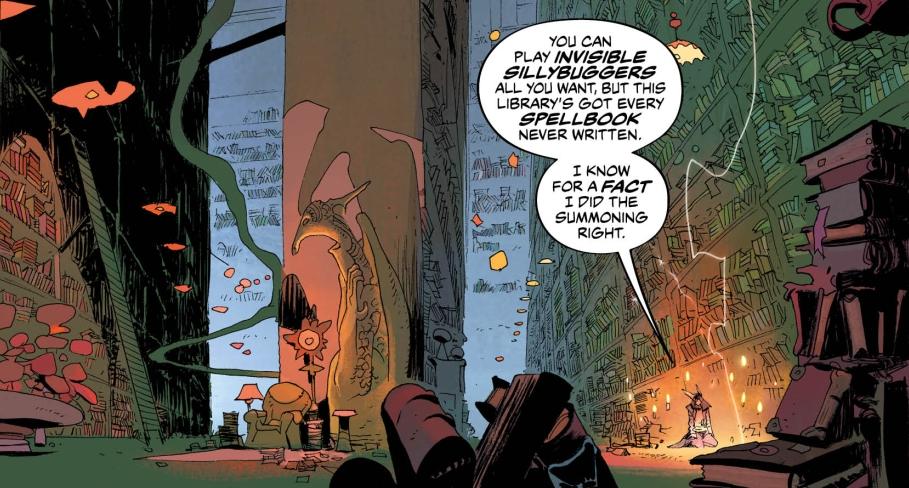 On top of this victory, she engages in further trickery to parlay one boon into two. She uses the extra boon to have Balam restored to his former status as a Duke of Hell, which strikes me as an interesting choice.

When Balam first appeared in this series, it seemed that their relationship was based solely in lust. Then we discovered that Balam had become besotted with Dora. But, it seems that Dora has some feeling for Balam as well. Could it be that Dora actually loves Balam as much as he seems to love her? It will be interesting to see how their relationship develops from here.

As for the boon she wins for herself, she chooses to learn who it was that broke her, so she can take vengeance on him. The issue ends with Dora confronting the bedridden man seen at the end of issue #12, which implies that Dora’s breaking is related the mysterious plot to take over the Dreaming.

The only thing lacking from this issue is the series’ main cast. But this seems to be a single issue interlude, and I am sure that Matthew, Lucien, Abel, and the others will return next issue. This issue centred gives us a deeper insight into the character of Dora, and the events lead directly back into the main storyline, so this brief detour from the main story is fully justified. 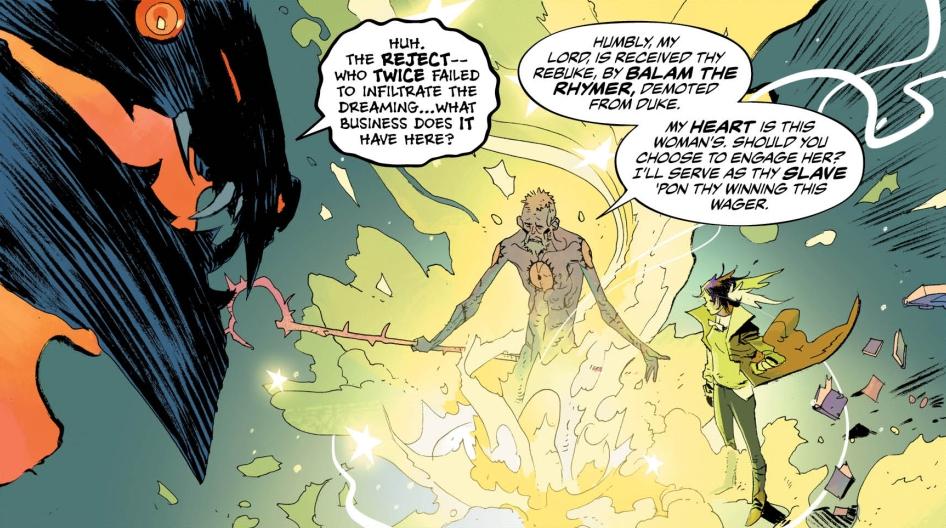 The thing I like most about The Dreaming is that it’s not just an attempt to replicate Gaiman’s original story. Rather, it’s a continuation that boldly ventures into new territory. Spurrier succeeded in taking the familiar elements from The Sandman, and has fashioned them into a compelling new story.