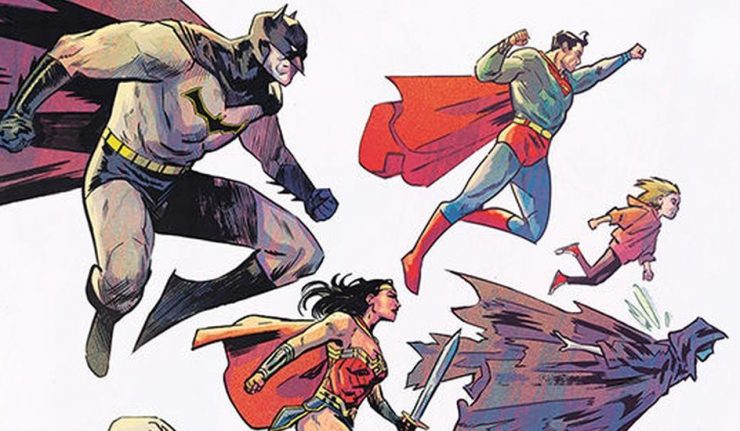 Black Hammer/Justice League: Hammer of Justice #4: The out-of-shape and out-of-practice Black Hammer heroes must contend with a suspicious Justice League as Colonel Weird and the Green Lanterns try to unravel the mystery at the heart of this dimensional switch–and the DC heroes marooned in Black Hammer Farm make a surprising discovery that may offer them answers.

The story kicks into high gear in this penultimate installment with a number of important developments. Most surprisingly, Zatanna frees Golden Gail from her curse of being an eternal ten-year-old, becoming a normal mortal woman.

I find it interesting that Gail’s mortal form is healthy, although elderly here in the DCU, but in Spiral City, she was decrepit and wheelchair bound. I wonder if this is due to a fundamental difference between how magic works in the DC and Black Hammer universes.

The magic involved in effecting Gail’s change actually does prove unnatural and harmful to the very fabric of the DCU. This threat catches the attention of the Spectre, who comes to remove Gail from existence.

On the Black Hammer farm, the Leaguers come to the realization that they haven’t really been trapped there for ten years, but rather a few days. They then don their costumes and set out to find their way home.

I think it says a lot about the respective teams that the League makes more progress in escaping their captivity than the Black Hammer heroes did in ten years. On the other hand, the farm was created specifically with the Black Hammer gang in mind, not the Justice League.

And Green Lantern John Stewart, the Flash, and Colonel Weird finally confront the stranger who caused the teams to switch places. This stranger is revealed to be precisely who I suspected: Mister Mxyzptlk. Having been found out, the imp is willing to set everything back the way it should be… with one condition.

Gail has had her fondest wish granted in the DCU. Returning to the farm would entail her being once again trapped within the body of a little girl. This is a terrible ethical dilemma that Gail will be forced to face. Gail is arguably the most selfish character on either team. Can she make the selfless decision to sacrifice her own happiness for the good of her teammates, the League, and a universe that isn’t her own?

One again, Lemire shows his understanding of the both universes. There are no missteps in either characterization, nor are there any implausible gaps in the plot. I can’t even find any small flaws to nitpick with his story.

The adventures of the Black Hammer heroes may be finished in their own title, but this miniseries gives fans one last chance to spend some time with them. Plus we get to see them interacting with the greatest team of heroes in comics. This story is a Jeff Lemire’s gift to fans of both universes.