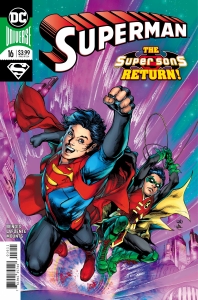 Superman #16: The Super Sons are back! But now Jon is five years older, and he’s sitting on the biggest decision of his young life. Damian and Jon team up again for a rip-roaring adventure and a huge catch-up! These two best buds have really needed each other, and now they are back!

I have felt very torn about Brian Michael Bendis’ tenure as the writer of Superman and Action Comics. I generally find the stories quite entertaining, but I really don’t like some of the changes he has made. Superman #16 demonstrates this perfectly. It’s a thoroughly enjoyable and touching story, but it features the change that I hate most Bendis’ Superman.

What Bendis gets right this issue is the friendship between Damian Wayne and Jon Kent. Both characters are portrayed perfectly. Damian’s reaction to a suddenly aged Jon is exactly what we would expect from Damian: suspicion that it’s some sort of deception. He even goes so far as to accuse Jon of being Leviathan.

But it doesn’t take him long to accept that this 17-year-old is actually his friend that was ten just a few weeks previous. They then fall back into their old friendship, indulging in some fast food, some crimefighting, and a heart-to-heart about Jon’s plans to travel to the future with the Legion of Super-Heroes.

There is also some nice bits of humour between the friends. For example, when Jon wonders if Gold Kryptonite is actually a thing, Damian responds, “If it is, we don’t have any hidden away in the Batcave in case of emergency with the other colour-coded Kryptonites.” 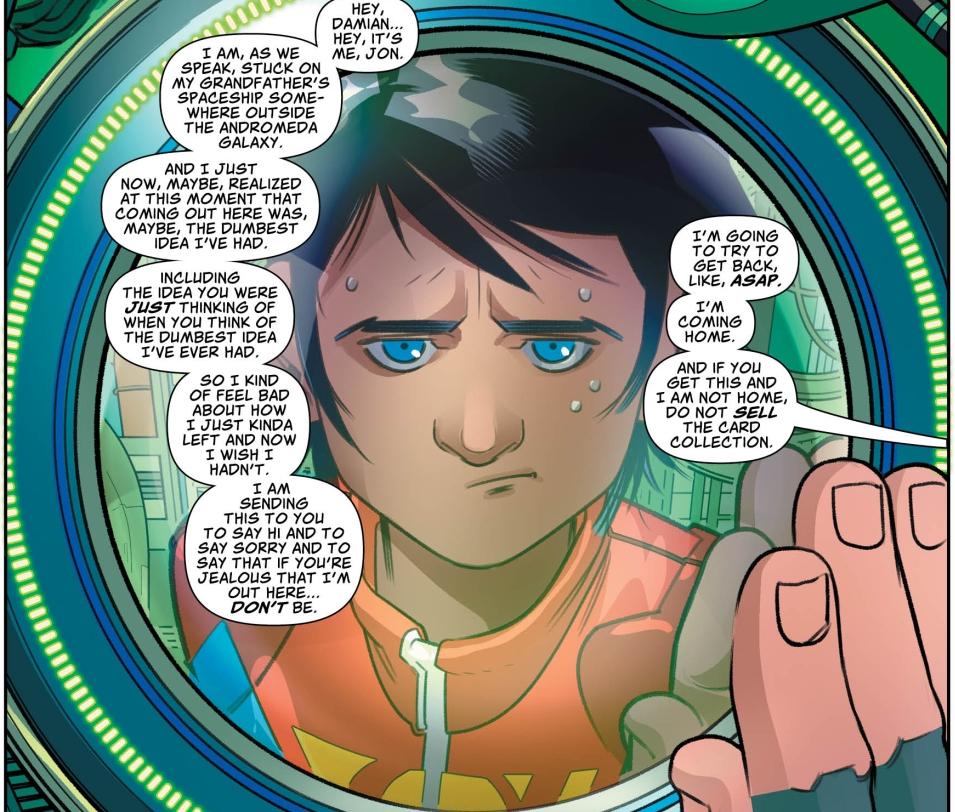 There is also a touching talk between Superman and his son before Jon sets off to the future with Saturn Girl. Superman shows his pride and trust that his son will do well with the Legion.

Superman also makes an interesting admission to Jon, revealing that he feels a bit envious at the Jon’s opportunity: “I am jealous of… the choices in front of you. I never really had that many.” It makes me wonder how Clark would feel if he knew that in a previous timeline, it was him that got to have adventures in the future with the Legion of Super-Heroes.

Although Jon is travelling to the 31st Century, he promises to return for special occasions. Plus, Saturn Girl gives Superman a device to call Jon back home if he’s needed. This is a hopeful sign, indicating that Jon will continue to make occasional appearances in the Superman titles.

David Lafuente’s art is unique and eye-catching. His style took me a bit aback at first, but it quickly grew on me. I especially like his depiction of Saturn Girl. I wasn’t sure how I felt about the new look for Imra’s costume, but Lafuente makes it look quite fetching on her.

As much as I like the story and the idea of Jon joining the Legion of Super-Heroes, I still absolutely loath that Jon was not left as a 10-year-old. The family dynamic of the Kents during Tomasi’s run was truly special, but Bendis has thrown this away just for the purpose of having Jon the right age to join the Legion. I don’t see why Bendis couldn’t have left Jon his real age in the present and had the Legion enlist an older Jon from a few years in the future. 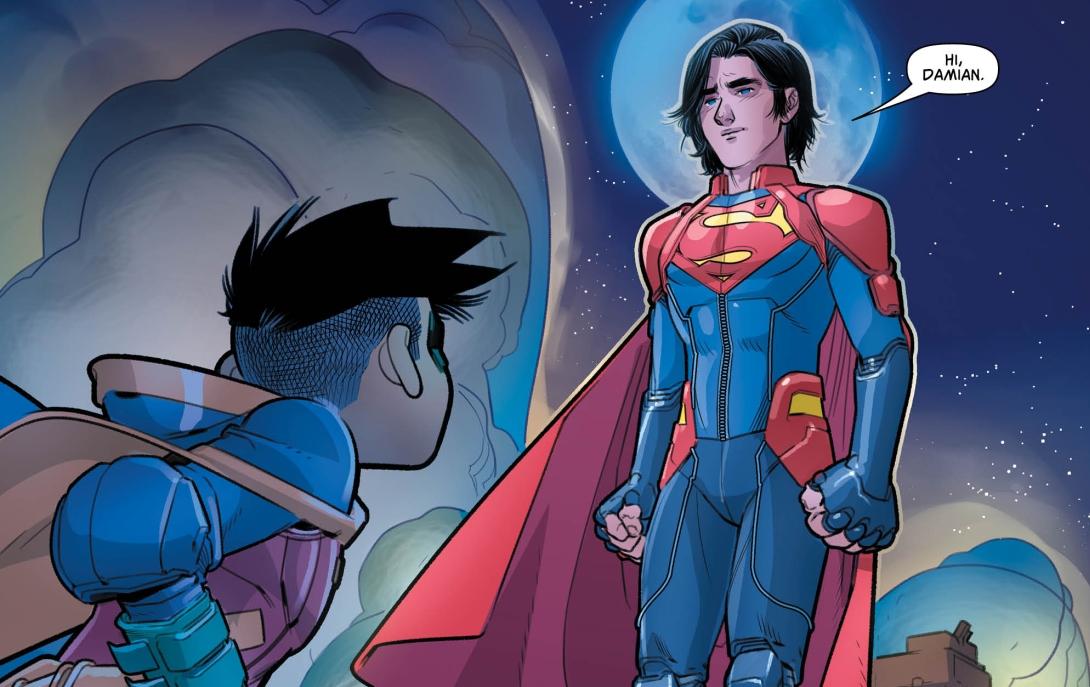 Also, if this issue was intended to show that the change in Jon’s age hasn’t changed the dynamic between Jon and Damian, then it failed in that respect. It’s not the same Super Sons. This issue shows that their friendship is still strong, but it isn’t quite the same as it was before.

Tomasi’s Super Sons was a true gem, which Bendis’ changes have effectively put an end to – just so Jon could used in his Legion of Super-Heroes reboot. This is the change to the Superman mythos that I find hardest to accept.

Despite my misgivings about the general direction, Superman #16 was still a joy to read. It gives a touching look at Superboy’s friendship with Robin and his relationship with his father. And it presents us with the historic event of Superboy setting off for his adventures in the 31st Century with the Legion of Super-Heroes. It’s definitely worth reading and adding to your comic collection.