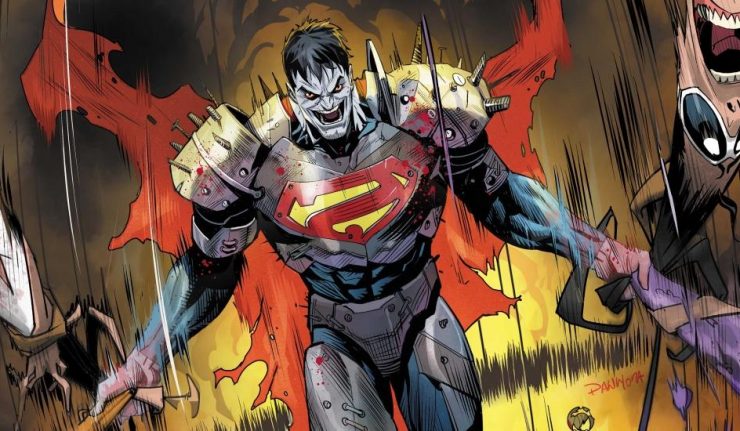 The Terrifics #21: “If I Could Turn Back Time” part two! Bizarro and the Terribles have invaded Earth-0 with a mission: turn back the clock. Armed with a time machine given to him by Lex Luthor, the one and only Man of Yesterday(TM) is determined to reverse progress in the Multiverse to a simpler time, a stupider time you might say. A bizarre time. So who’s going to stop this regression transgression? The Terrifics, that’s who!

Bizarro stories can be confusing, but they can be an awful lot of fun in the hands of a capable writer. Luckily, Gene Luen Yang is just that. Bizarro and his new pal, Mister Terrible have concocted a plan to “help” the Earth by regressing it backwards through the decades.

It’s quite interesting to see how the Terrifics are affected by the time regression. In this issue, we see them wearing 80s fashions and riding a Voltronesque ship that splits into individual vehicles. This later changes to 70s clothes and a van reminiscent of Scooby-Doo’s Mystery Machine.

I was pleased to see Boyzarro popping up in this story. This is a nice callback to Tomasi’s stellar Superman run. However, the father-son reunion is rather heartbreaking once you realize what Boyzarro is really saying when he pleads, “Please, Dad! Go! Me can be useless to you! Really me can!”

I also liked seeing the Rocket Reds, which brought back fond memories of Giffen’s Justice League. Unfortunately, it wasn’t the real Rocket Reds, but Plastic Man’s bizarre duplicate, Disposably Man having transformed himself into Rocket Red armour and encasing the Terrifics.

It was interesting to see Plastic Man stretching his abilities, no pun intended. He manages to borrow Disposable Man’s ability to create duplicates of himself. Might this be a power that he can develop independently later on? It has been hinted that Plastic Man might be a lot more powerful than anyone, including himself realizes.

And I love Plastic Man’s proposed new catchphrase for him and Metamorpho: “Shape-Shifty Twin powers activate!”

However, the best solution is to just put logic on the backburner and go with the weirdness. However, the story has to be entertaining enough to allow the reader to give willing suspension of disbelief the boot and enjoy the craziness. And Yang has succeeded in giving us a pretty fun story to allow for this.

The Terrifics has outlasted all of the other titles from DC’s New Age of Heroes line, and I think it’s due, in no small part, to the lighter tone of the series. That plus, the likeability of the characters, the superb writing, and gorgeous art make The Terrifics one of my favourite comics of all-time.