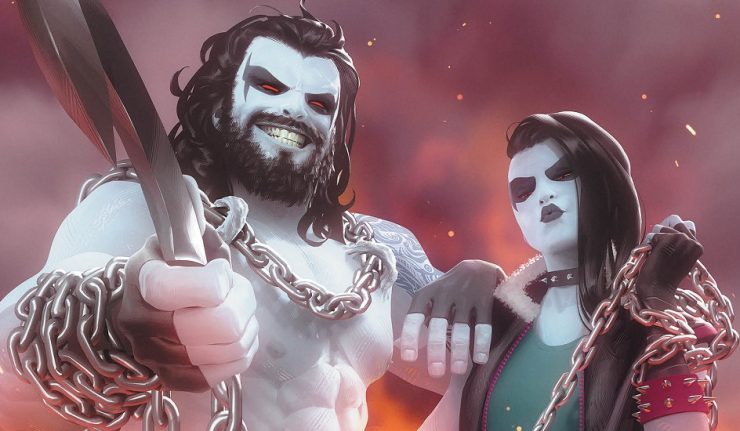 Teen Titans #36, “Sins Of The Father” shows us just how much of a monster Lobo is, and how much more of a hero Crush is than we ever imagined. This character has, since her introduction, gone out of her way to distance herself from her team-mates and try to put herself across as cold and deadly. The way she constantly tries to go against her father’s will in this issue, particularly when it comes to dealing with the rest of the Teen Titans, and with the lives of innocents, mark her out as a true hero. Something Lobo has never been, nor could ever claim to be.

Adam Glass clearly had Crush’s entire backstory and character well imagined and fleshed out in his mind, long before he ever put fingers to keyboard. Glass has proven himself to be an outstanding storyteller and creator of deep, rich and fascinating characters. Case in point the aforementioned anguish at being used as a pawn for chaos and destruction, and Crush’s clear feelings of love for Djinn.

Roundhouse too has been a revelation. Always depicted as the lovable, affable comic relief, when he was unmasked as the traitor in the Titans’ ranks no-one was more surprised than I was. I’ve been reading comics for over forty years and only a truly exceptional writer can fool me, and that’s just what Teen Titans has in Adam Glass.

Bernard Chang and Marcelo Maiolo have been one of my favorite art teams for many years, and they’ve delivered truly outstanding work for over a year in the pages of Teen Titans. Both men work to each other’s strengths and consistently make each other look greater together than they would alone. Just look directly above this paragraph at the gorgeous opening pages to this issue. Check out the innovative panel layouts and the perfect combination of strong line art with bold, vibrant color. These men are two of the best in the business. I have nothing against fine-art in comics, I’m a huge fan of Alex Ross, Bill Sienkiewicz and Dave McKean, but what Bernard and Marcelo are producing is pure and great comics art. It’s hugely underappreciated and – quite honestly – not that common anymore.

Oh, and if anyone wants to know what great lettering is, look at how the wonderful Rob Leigh has lettered “Sins Of The Father” to fit in with the flow of the line and color art, rather than just stamping huge block capitals over the beautiful visuals. Out… stand… ing.

What do you think? Do you even know me at all?

What we get in Teen Titans #36 is a story well told, with great characterisation, pulse-pounding action, thrills, spills and shocking revelations. All of that would be enough on its own, but when it comes wrapped up in some of the best comics art on the shelves, what readers walk away with is a vintage comic-book that’s a classic in the making.

I will treasure this run for years, especially as I get the horrible feeling that it’ll be coming to a close soon. I rate Glass, Chang and Maiolo as the greatest Teen Titans creative team since Marv Wolfman and George Perez, and those are words I never thought I’d ever type.