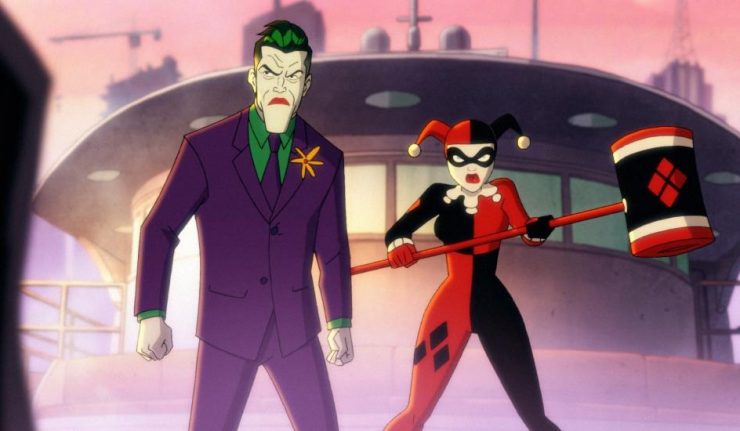 Harley Quinn 1×01 – “Til Death Do Us Part“: Harley Quinn (KALEY CUOCO) has finally broken things off once and for all with the Joker (ALAN TUDYK) and attempts to make it on her own as the criminal Queenpin of Gotham City in this half-hour adult animated action-comedy series. With the help of Poison Ivy (LAKE BELL) and a ragtag crew of DC castoffs, Harley tries to earn a seat at the biggest table in villainy: the Legion of Doom!

In the series premiere, Harley Quinn is fed up being the Joker’s sidekick and strikes out on her own – determined to become the criminal Queenpin of Gotham City.

I’ll admit that I didn’t know exactly what to expect from this cartoon going in. I hadn’t seen the commercials. Our first glimpse of Harley shows her in her original Batman: The Animated Series outfit. This gave me the impression that this was probably going to be a relatively tame take on the character that both kids and adults could enjoy together.

That notion was immediately obliterated the second she opened her mouth. Within the two minutes, Harley dropped five F-bombs, a few other profanities, and inflicted a number of excessively graphic injuries on other characters.

No, this cartoon is definitely geared to an adult audience. There are a ton of swears and a lot of over-the top violence. However, there isn’t a lot of sexual situations or innuendo – at least not in this introductory episode. However, I wouldn’t be surprised to see that materialize in future episodes. Depending on your parenting style, you might be okay with letting older kids watch this, but this isn’t recommended for the little ones.

Unlike Harley’s comic book, this cartoon is set squarely in Gotham, with lots of that city’s notable figures making appearances. This includes many of Batman’s rogues gallery and supporting cast and even the Dark Knight himself is present.

In Harley Quinn 1×01, we see Harley undergo a significant bit of character growth that took years in the comics: getting over her infatuation with the Joker. She starts the episode as the Joker’s devoted sidekick, but comes to realize how poorly she is being treated with the help of Poison Ivy.

The heart of the story is the friendship between Harley and Ivy. Ivy goes to the trouble of setting up a situation where the Joker has to choose between saving Batman or Harley. The Joker’s choice to save his foe forces Harley to realize that her feelings for him are one-sided. This leads to an epic breakup fight that decimates the Joker’s henchmen and demolishes his hideout.

Ivy clearly cares for her friend, and I look forward to seeing if that friendship evolves into a romantic relationship as it did in the comics. Given the adult orientation of the show and the freedom from the limitations of network television, there is no reason that the creators would have to shy away from portraying an open lesbian relationship.

The show also uses Harley’s insanity to great comedic effect. At one point, Ivy shows her a picture of herself as psychologist Dr. Harleen Quinzel. To Harley’s eyes, the picture comes to life and proceeds to analyse her feelings. However, Ivy  breaks in to comment on how it appears that Harley is having a one-sided conversation with a photograph.

I don’t know whose idea it was to put Commissioner Gordon as comic relief, but it’s a bloody brilliant one. I literally laughed out loud watching Gordon flicking the Bat-Signal on and off and then blurting “I wasn’t playing with it!” upon realizing that Batman had arrived.

However, I think it was a smart move that the Dark Knight himself is being played seriously. There is probably more comedy in his humourless approach to the insanity of Harley’s world than there would be in giving him some bizarre quirk. Characters such as Harley or the Joker work best when they have a straight man. And Batman makes an excellent straight man.

I also loved the character of Frank, a man-eating plant of Ivy’s. This is clearly a nod to Little Shop Of Horrors. Frank strongly resembles Audrey II, who shares his love of human flesh. Also, the voice acting is strongly reminiscent of Levi Stubs’ portrayal of Audrey II. And the name Frank is a nice nod to the movie’s director Frank Oz.

The only complaints conceivable at this point are that the cartoon doesn’t follow the comic closely enough. I don’t really see it as a valid complaint to measure one medium’s interpretation of a character against the portrayal of the same character in another medium. What works in a comic doesn’t necessarily work as well in an animated TV show.

However, there are some core defining qualities that should always remain between different versions, which this cartoon does admirably. Harley’s visual appearance, backstory, and supporting cast are remarkably in line with her history in the comics and in Batman: The Animated Series.

This show is hilarious and yet remains remarkably faithful to character. It does a  wonderful job of bringing out the silly side of Gotham City. Judging from this initial episode, it looks like Harley Quinn is going to be a helluva lot of fun!