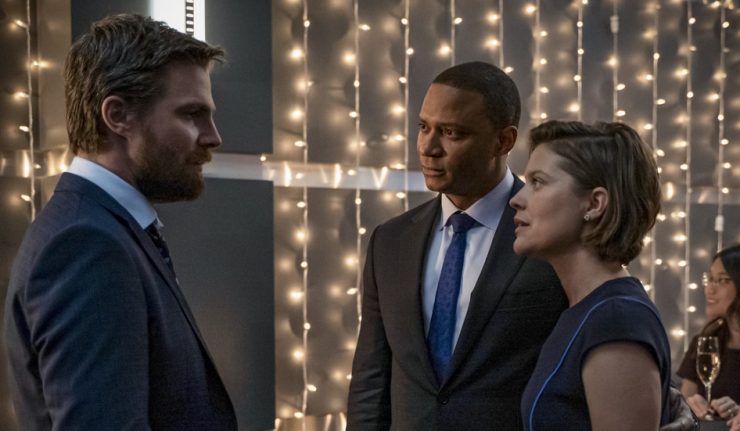 Trapped in a time loop after Lyla’s betrayal, Oliver and Laurel fight to break the cycle which strangely involves the fate of a strangely-alive-and-well Mayor Quentin Lance.

The sense of weightlessness is established in this week’s installment from the moment Oliver opens his eyes. The writers are clever to establish a surreal reality that feels like a hangover. From Quentin being alive to everything being kosher with traitor Lyla, fans are taken with an equally-confused Oliver through a disorienting set of circumstances. Stephen’s gradually escalating desperation with each reset of events is brilliantly conveyed through different actions played through the same scene. He cares little about decorum or looking dissheveled as he tries to alter fate over and over. The writing is smart in shrinking the repetition gradually to waking up and the few moments with Quentin because it follows Oliver’s primary focus. The lighting also feels off; you don’t always see the seams in both Black Canary’s and Green Arrow’s costumes given they keep close to the shadows. The very nature of the loop is also kept clandestine so it leaves viewers wondering if it’s a virtual reality or drug-induced coma. Making this series of events the actual machinations of the Monitor conveys the level of his power. It also introduces viewers who haven’t seen “Elseworlds” of the level of his abilities. With the ability to warp reality and bring people back from the dead, it makes The Monitor a foe that is outside of Green Arrow’s ability to defeat. Ramsey’s directing style keeps everything sharp and gradually zeroes in on the only way out for Oliver: There is no way out of his destiny. The futility of Oliver’s efforts to stay alive appropriately flies in the face of what he has believed for so long. Using the next subject of focus this week appears vital in that sense.

Paul Blackthorne back in the role of Mayor Quentin Lance brings with it a feeling of things coming full circle. Able to provide levity with his “Groundhog Day” reference gives him the everyman presence that is needed. The episode also works to get into the mind of Quentin on his thoughts on death and his ability to change his perceptions on issues. The conversations between Oliver this week carried with them a sense of closure. Both began as adversaries, then became allies, then enemies again post-Sarah, and eventually working together in the Mayor’s office until Oliver was exposed. Beneath it all, Oliver had always respected Quentin for his character and his convictions. Even in this altered reality, it’s his p.o.v. that gives Oliver the insight he needs to understand what The Monitor is trying to tell him. Paul’s final scene with an emotional Katie also gets viewers in the feels. Not only does it convey Earth-2’s depth of feeling towards the man who took her into his heart, but it’s another on-screen goodbye for old friends. What makes their final conversation more poignant is them reflecting on what make Quentin change his mind on “The Hood.” That last handshake Oliver offers Quentin, that last moment onscreen between Stephen and Paul, delivers on that chapter-closing feel although for Quentin it feels open-ended.

Audrey and Stephen’s scenes together are rare because a majority of the time she shares the stage with David. Under the Monitor’s influence, she almost adopts a disconnected Amanda Waller-eque demeanor. That ends-justify-the-means approach, however, is tempered by her conveyance of concern for her family. She is the unseen rudder that is steering Team Arrow towards the direction the Monitor wants. It remains to be seen how far her role will take her in this conflict and what she is willing to do. David’s decision to put these two into one room together is smart because it’s away from visual distraction and conveys the possible abilities Lyla had been granted in her role.

Where was Diggle in all this? He was on the roof with Oliver and Lyla when they were tranked, so fans were a little disappointed to not learn his fate. Also, that obnoxious cop that Oliver runs into again and again didn’t have that “Ned-to-Phil-Connors” effect. It’s also difficult to see where the kids fit in to all of this; they were relegated to secondary roles after being front and center these past few weeks. Also, I’m surprised that Oliver didn’t give Lance a larger vest or better protection with each reset.

I give this, in spite of the flaws, a 5 out of 5. Having David Ramsey – our own John Diggle – helming the episode delivered because of his intimate knowledge of what his cast needed and what scenes were most integral to deliver on confusion, surprise, and ultimately closure. Paul’s return this year was welcome news and brought that groundeness that Arrow always had it’s prochnost. It would’ve felt off if the execs did not find some way to bring Quentin Lance back, if only for a cameo or flashback. Giving Quentin an entire episode and one more adventure with Oliver Queen and another moment with his daughter was great fan service. Overall, Arrow 8×06