Detective Comics #38 Re-released as a Facsimile Edition For Robin’s 80th!

It’s a landmark issue in the history of Batman and the Golden Age of Comics. Not only did it introduce the world to Robin, The Boy Wonder, but the archetypal teenage sidekick. Now, in honor of the 80th anniversary of Dick Grayson, DC will release a facsimile edition of Detective Comics #38.

Here is the official synopsis:

Written by BILL FINGER, JERRY SIEGEL, and others
Art by BOB KANE, JERRY ROBINSON, and others
Cover by BOB KANE and JERRY ROBINSON
Find out why Batman’s partner in crimefighting was billed as “the sensational character find of 1940” in this special reprint issue that features the first appearance of Robin, the Boy Wonder! Also in this issue: “Spy,” and “Slam Bradley,” both written by Superman co-creator Jerry Siegel; plus the Crimson Avenger, Speed Saunders, and other detective features!
ON SALE 03.11.20
$3.99 US | 64 PAGES | FC | DC

Dick Grayson’s 80-year journey since his first appearance has broken every single barrier from the Golden Age onward. First brought to life in early live-action serials, the most memorable portrayal has been Burt Ward in 1966’s Batman tv series alongside Adam West. It’s because of Ward and the dialogue that the comics of the time were peppered with the “Holy-isms.” They became a mainstay in the medium for many years. Ward even reprised his role as a retired Robin in the recent CW “Arrowverse” crossover, Crisis on Infinite Earths, canonizing the events of the 1966 series as the now-destroyed Earth-66.  But, of course, not before Dick gave one more that sadly became his last words: “Holy crimson skies of death!” 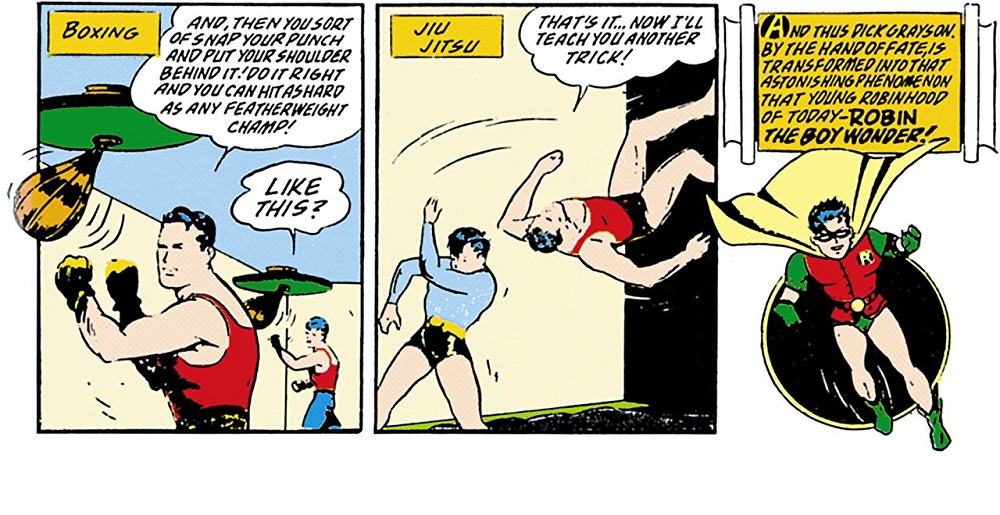 One of the first sidekicks to graduate to full-fledged hero – Nightwing –  Dick’s been leader of the Teen Titans, The Outsiders, and was once a Justice League member.  He’s even had his own self-titled comic and succeeded Bruce Wayne as Batman on two lengthy occasions.  But, it all began in this issue that saw an orphaned circus boy taken in by the one man who could relate to his loss and offer a path. (Interestingly, a mint copy of the original issue stands at a value of $152,000, so fans are getting a great deal for $3.99.)

Since leaving the role, Grayson has been succeeded by Jason Todd, Tim Drake, Stephanie Brown, and currently Damian Wayne. The identity of Robin has become synonymous with Batman as  both his protégé and crime fighting partner.

Look for the Detective Comics #38 Facsimile Edition to hit the stands on March 11, 2020, which is, hot surprisingly, a few days past its original March 6th, 1940.  “Holy nearly missing the mark, Batman.”