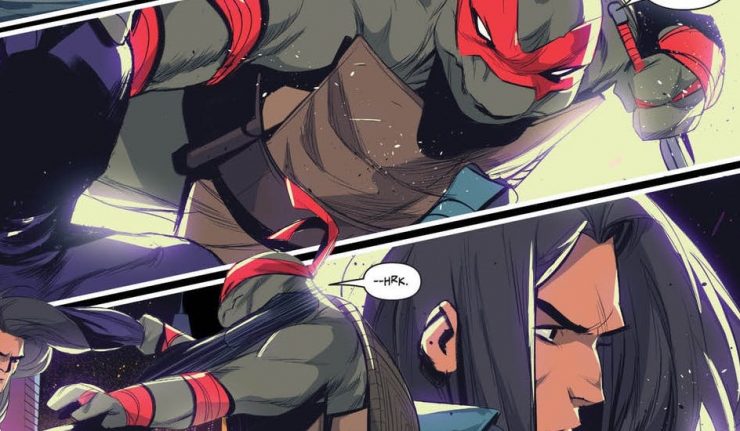 The Power Rangers arrive in New York City to find Tommy Oliver – AKA The Mighty Morphin Green Ranger – and discover him in combat with the Teenage Mutant Ninja Turtles! Rushing to his aid, the Rangers get caught up in battle with the Turtles. But afterwards, the Rangers find out that Tommy has joined forces with the villainous Shredder and the Foot Clan! Reeling from this betrayal, the Power Rangers must somehow find a way to work with the Ninja Turtles to defeat the true villains and save the world from total destruction!

Dan Mora’s cover is pretty cool. The colors are appealing and pop well. I like the simplistic background as well; it creates a nice contrast with the heroes.

The interior art is great as well. The team creates a subtle difference between Angel Grove and New York City; they do legitimately feel like different places. There are wonderful colors throughout. And it’s a very lively and expressive book.

Like the crossover between Batman and the Ninja Turtles, this book is not too concerned with continuity. It is the standard Power Rangers and the standard Ninja Turtles. I’ve never read a Ninja Turtles comic outside of the previously mentioned Batman crossover and I had no trouble jumping into this. The premise is simple enough that anyone can jump right in with even the most basic understanding of the two properties.

I like that the two teams feel evenly matched. Neither one is overshadowing the other and there’s no cheap writing to make one team especially weaker for the sake of making the other one look cool.

I like that they’re playing with Tommy’s dark side. As a fan, it does feel a little over played and obvious. But for casuals and Ninja Turtle fans, the one Power Ranger thing they might know is the evil Green Ranger. It makes sense and it will be fun to see Tommy working for the Shredder.

This issue is a lot of fun. The art is stylistic and engaging. I feel that the story is a little obvious but that’s probably for the best. This is something I think both casual and hardcore fans will enjoy. And hopefully, kids will check this out because it’s really enjoyable. I highly recommend reading Mighty Morphin Power Rangers/Teenage Mutant Ninja Turtles #1.