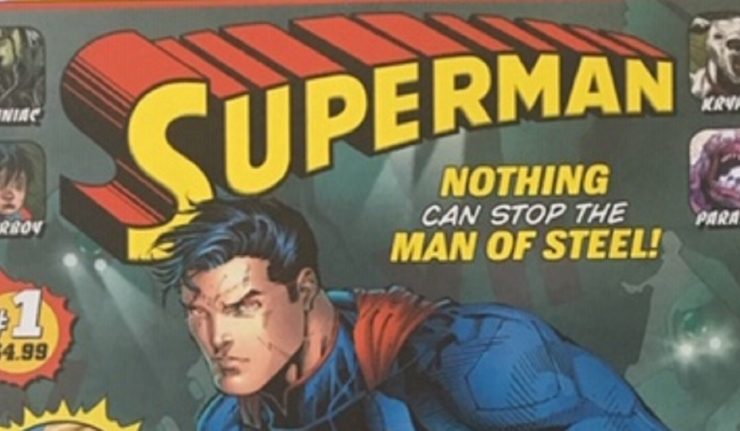 A ravenous Parasite attacks the power plant in Metropolis providing another “job for Superman!”  It’s not just the physical threat that requires the Man of Steel’s attention, it’s the humanity and hope he embodies to resolve the situation on a wider and deeper scale.

Superman is one of the most recognizable fictional characters around the world.  Despite the success of the Marvel Cinematic Universe films, everyone still know Superman.  While there’s often talk of Superman’s relevance in the world today, the new lead story in Superman Giant #1 demonstrates how this just isn’t true.  And, it’s not simply trying to reframe “Truth, Justice and the American Way” either.  Superman is a symbol of hope for people in both our world, and the world he inhabits in the stories published by DC Comics.

The Parasite’s rampage through the power plant throws Metropolis into an unprecedented blackout- think New York City, 1977.  Before Superman can take on Rudy Jones (the Parasite) he wants to make sure that the average citizen is safe, so he goes into the streets and mobilizes them.  He gets them thinking about the right things, not focusing on their fears so that they can help their friends and neighbors, especially the elderly and sick.

This is an insightful take on Superman because it illustrates how the average person can be a “superman.” It doesn’t require superpowers to help in this type of situation.  One may not be able to take on the monster destroying the power plant, but anyone can step up and help a friend, neighbor or even a stranger in need.  The core of Superman’s ethos revolves around being a better person.  This is something not reserved for super-heroes, but rather something everyone can do.  To sell it, Venditti takes the time in the story to show some of the acts of kindness Metropolitans commit.

It’s also worth noting that Superman sees an opportunity to help Rudy Jones.  Jones didn’t ask to become the Parasite.  Superman recognizes that Rudy needs as much help as the citizens of Metropolis, perhaps even more.

It doesn’t end with Superman, though, Venditti writes a classic Perry White directing his reporters to get the story of the black out.  It’s a humorous sequence, laid out effectively by Pelletier, that ends with Lois and Clark on the roof of the Daily Planet, and Lois tossing Clark’s discarded clothes off the roof as Perry and Jimmy follow them up.  Incidentally, Pelletier’s splash page is an iconic moment in and of itself!

Lois gets her moment to shine as well, when the story she turns in is not quite the story Perry wanted.  Instead of the “disaster” headline, Lois delivers the story about Superman’s efforts on the ground which reinforces the theme of everyday people being everyday heroes.  This an element of Venditti’s writing that is not always apparent.  If you take the time to think about what’s in his stories, you realize there’s something deeper.

This is a great fit for the Man of Steel.  Paired with Tom King’s “Up in the Sky” (Superman Giant Vol.1, #1-16), an amazing emotional tale that depicts Superman’s character perfectly, Venditti’s inaugural Superman tale expands upon this showing how Superman inspires the everyday person into action.

The only real negative is that this is a stand alone story so far.  Where does this go?  How will these stories develop over time?  Lots of potential!

With Superman and Action Comics deconstructing Superman to the chagrin of many fans, Superman Giant #1 offers a truly iconic take on the Man of Tomorrow.  The entire cast is effectively recognizable, Venditti isn’t trying too hard.  Most importantly, the story demonstrates the honest simplicity of the core concept of the character.  Sometimes there are good people in the world.  Sometimes they choose to do the right thing.  Superman not only does that, but inspires others to do the same.  He understands he’s just as human as the rest of us, despite his alien DNA.  There’s no overwrought, internal, pointless conflict.  It’s just Superman being Superman.  And it’s great.