The Last Superman Story – “I am Superman!” 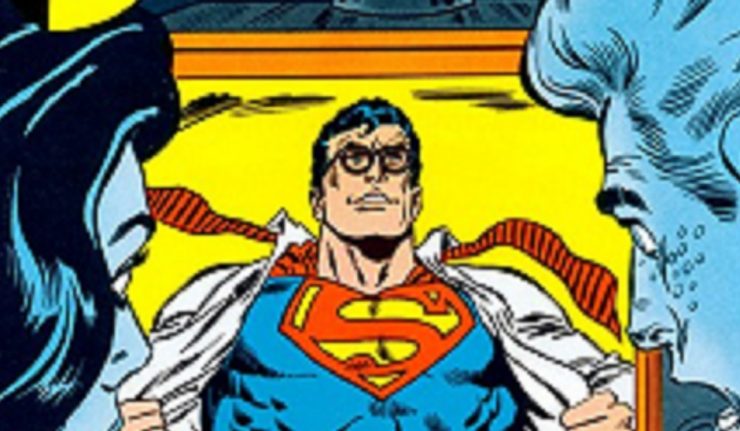 December’s Superman #18 promises to be a landmark issue as Brain Michael Bendis is writing the last Superman story. What’s that you say? Isn’t he just having Clark reveal his identity to the world? Well, yes. But, what is Superman without Clark Kent? What are the greater ramifications of this revelation? Perhaps, in an attempt to be relevant, Bendis is proving he really doesn’t understand the character and how the dual identity works.

“I’ve Just Made My Friends and Family a Target!” – Superman

The first thing that springs to mind when Superman reveals his identity is that he’s immediately painting a target on each one of Clark’s friends and family members. We don’t know if Ma and Pa Kent are dead or alive in the current continuity, it’s been unclear. If they are alive, they won’t last long off in Smallville without some protection. However, we certainly know that his wife Lois Lane will be the first individual Clark will have to try and protect.

Now before you say that Lois is already a target, let’s not get carried away. Lois is a reporter. Sure she’s made enemies. But, she’s made enemies in the way all reporters make enemies. With Clark’s identity out there, she’s going to be in the crosshairs of every foe the Man of Steel has ever faced. All it will take is Superman being off planet or on the other side of the country to give anyone the opportunity to take a shot at Lois. Bendis has already made it difficult on the couple by having them live apart in his run, now it’s going to be even tougher.

What about Jimmy Olsen? Bendis hasn’t explored their friendship too much, but the two are probably still friends. Jimmy’s another person that will need special protection. And, what about the Daily Planet itself? All it would take is a couple of bombs to bring the whole building down with everyone in it. There goes Perry, Jimmy and the entire staff with Clark standing in the rubble wondering why DC had to let Bendis write Superman.

And that’s just the beginning- what about all of the people Clark grew up with in Smallville. Villains know what kind of person Superman is- they know he will try and save everyone. Superman has just given his enemies an easy way to keep him distracted. Superman can’t be everywhere at once. There have actually been some good stories that explored this theme.

While Bendis sees Clark revealing his identity as a matter of being truthful and honest, he is missing the point that having a secret identity protects all of those people in Clark’s life. Clark chose to put his life in danger as Superman. It’s completely irresponsible to remove that protection from his friends and family and probably anyone he’s ever known growing up. Superman will be so tied up protecting these people his career as Superman will effectively be over. This is the logical extension of Clark going public, and it’s just the tip of the iceberg of the problems that should ensue after the reveal.

Superman has been fighting for Truth, Justice and the American Way for a long time, 1942 to be exact, in an episode of the Superman radio program. Some would say that Superman has been less than truthful about his identity as Clark Kent. And, I think there’s a complexity to the issue that goes way beyond the simple notion of revealing his identity to the world as a sign of being honest.

As demonstrated above, Clark’s secret identity protects his friends, family and co-workers. This ruse is not a device that Clark uses for his own gain. His purpose is not to deceive in order to trick people for his own betterment. Everyone is deserving of a private life. Just because someone doesn’t broadcast every detail of their private life on the television doesn’t make them dishonest. There are plenty of philanthropists and regular citizens that donate to charities and social causes anonymously. It’s not dishonest to make anonymous donations. It happens all the time, and the people that do it are just trying to help. They aren’t looking for any personal gain; they just believe that it’s the right thing to do.

Superman is Clark’s anonymous gift to world. Clark has extraordinary powers. He was raised by parents that taught him to do the right thing. He is incredibly unselfish sharing his powers for the good of friends and strangers around the world. And he doesn’t ask for anything in return, except maybe, try and do the right thing as well. This doesn’t make him dishonest. It doesn’t make him untruthful. It makes him human.

When one thinks of the place where Superman retreats to get away from it all, the Fortress of Solitude is probably the first place that comes to mind. But, it’s not the first place that Superman chooses. It’s much simpler than that. A pair of glasses, a comb on the hair and Superman is in the Fortress of Clark. Even though Bendis claims that Clark isn’t going away, with his identity out in the world, it will be much harder for him to live as Clark, because the world will only see Superman.

Clark is already a known individual in Metropolis, and once he tells the world, anyone that wants to find him will be able to. He won’t be able to walk down the street without being mobbed. Everyone will have a need they want Superman to fulfill. People will find out where Lois and Clark live. When Superman reveals his identity, he is giving up his privacy. The secret identity is what has allowed Superman to have down time, to have private family time, to have time when he isn’t “on.” He may be Superman, but he’s still a man. He’s a man with human emotions and needs. Losing the Fortress of Clark will take its toll. What will he do when he HAS to go to the Fortress of Solitude to get away? He won’t be able to just crash at 344 Clinton Avenue ( or 1938 Sullivan Place) and expect to be left alone. The world will always be knocking at that door, because the world sees Superman, not Clark Kent. If the world doesn’t see Clark Kent, then there is no Clark Kent. And without Clark Kent, there can be no Superman, giving us the last superman story.