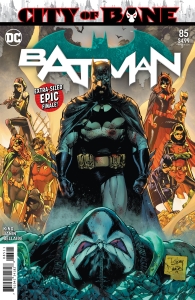 Batman #85: The stunning conclusion to “City of Bane” is here! How will Flashpoint Batman be vanquished from our dimension? What will become of Gotham Girl now that she’s betrayed all she knows? How will the Bat team cope without Alfred? Will Catwoman stick around? Who will rebuild Gotham City? Is Batman ever going to be Batman again? The event of the summer now closes out the year, setting the stage for a whole new path for the Dark Knight Detective. You don’t dare miss the extra-sized concluding chapter to Tom King’s epic run on Batman-and it all leads to the new Batman and Catwoman series!

We have finally reached Batman #85, Tom King’s final issue on the title. King wraps up the story he started at the dawn of the Rebirth era in Batman #1. This story was designed to reflect the central idea behind DC’s Rebirth initiative.

The overarching theme of the Rebirth era has been about the struggle between hope and despair. The New 52 reboot was intended to attract new readers, but it lost touch with the optimistic core that defines the DC Universe.

King raises the question of whether Batman can be happy and still be the Batman. By proposing to Catwoman, Bruce was set to find some happiness for himself. But the idea that Bruce’s happiness would end his effectiveness as the Batman led Selina to leave him at the altar.

Then the Flashpoint Batman was added to the mix. This alternate Thomas Wayne had known nothing but sorrow from his own career as Batman and like any good father, he wanted better for his son. He was determined to make Bruce give up being the Batman by any means necessary, so that he could find some happiness.

Last issue, we saw that Thomas Wayne made a vow by his son’s bedside: “I swear by the spirit of my parents to protect your life. By spending the rest of my life warring against anything that causes you pain.”

This issue, Batman responds to Thomas with his own oath that he made by the same bedside: “I swear by the spirits of my parents to avenge their deaths. By spending the rest of my life warring on criminals.” 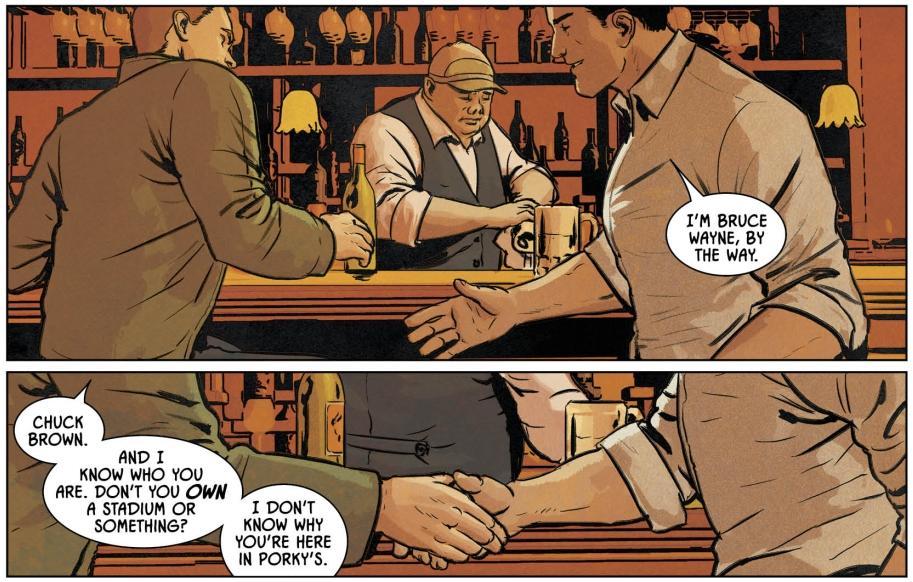 But Bruce goes on to explain that the vow was more than a choice made by a child still processing his parents’ death. He makes the choice to affirm that oath every day. And that he declares that he chooses to be Batman and to be happy, rejecting the false choice between the two: “I choose her. I choose happiness. I choose family. And I choose Batman.”

Way back in issue #27, King gave Kite-Man a name and background that clearly paid homage to a classic comic strip character. Batman #85 brings Chuck Brown back into the picture to show that this was meant as more than a tribute to Charles Schulz’s creation.

In a flash-forward scene, Bruce Wayne encounters Chuck Brown in a bar, and they strike up a conversation about the football game they are watching. Specifically, they discuss a particular player who “gets st up and loses the ball. Ends up on his back. Over and over and over again.” This is clearly a reference to Charlie Brown’s repeated attempts to kick the football that Lucy always pulls away at the last moment.

But Bruce denies that the player is doomed to failure. “Maybe he knows how to go down and how to go back up.” And the story ends as the player finally succeeds. King is indicating that like this player and like Charlie Brown, Batman is optimistic that he will succeed, even in the face of certain failure. This is the hope that keeps Batman going. This was a nice way to make a closing statement about Batman. 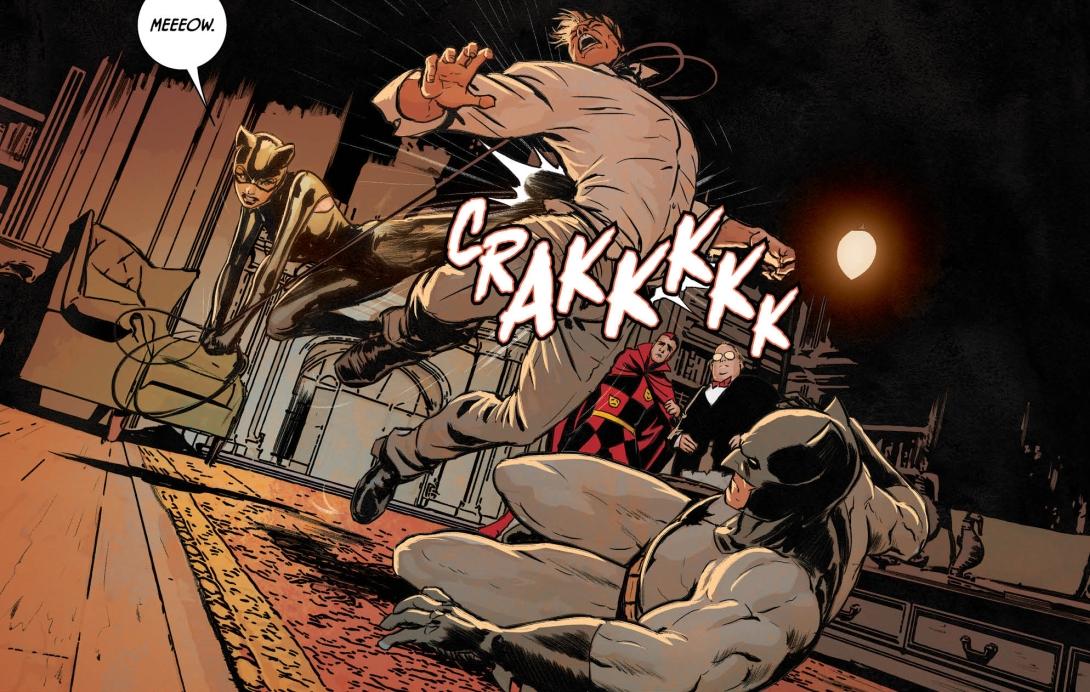 King also ties up a number of loose ends. Bane wreaks his vengeance on the ersatz Thomas Wayne, apparently removing him from the picture permanently. I feel this is a good move. This version of Thomas Wayne was well used in King’s Batman saga, but I don’t believe that having him stick around as a villain would have been a good idea.

Gotham Girl is dealt with in an interesting way. Instead of turning her over to the police for her crimes, Bruce gives her a second chance to truly realize the heroic life that her brother Gotham envisioned. Batman uses the piece of Platinum Kryptonite that King introduced in last year’s Batman Secret Files #1 to grant her superpowers equivalent to a Kryptonian.

This demonstrates that King was working towards a planned end for his story and not making it up as he goes along. He has been laying the groundwork for this stories conclusion all along.

King got a lot of fan backlash when Catwoman left Bruce at the altar in issue #50. I believe that the fault lies more with DC’s marketing. They built it up as a major event, which convinced a lot of the fans that it was actually going to happen. When it didn’t, a lot of fans directed their anger at King. This was despite King’s insistence that the story happened as planned and that the story of their romance was only at the half told at that point.

So, those fans who stuck around for the second half have been wondering whether King would have them actually get hitched before departing the title. They do decide to get quickly married, but get too involved in celebratory lovemaking to remember to actually go through with the ceremony. 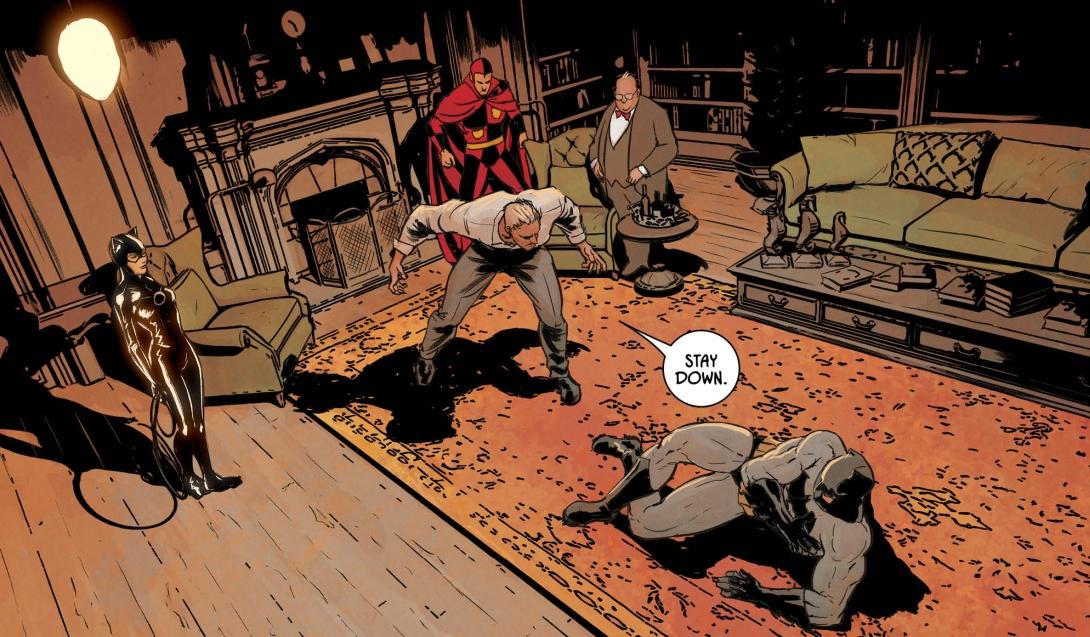 Selina declares that they don’t need that they don’t need a formal, legal ceremony. She states, “It doesn’t matter… because we believe in something higher than the law. After what we’ve been through, after the years, the deaths… I don’t need a judge. Or a dress. Or an audience. To know that you… you and I.. The Bat and the Cat. We are forever.”

And we see clearly that Selina is wearing a wedding ring. They may not be legally wedded, but it’s quite clear that they essentially consider themselves to be committed to each other for life.

Will this suffice, or will they make a more formal commitment? Also, will Selina be moving into Wayne Manor? And how will this affect Catwoman’s own title? There’s still lots of questions to be answered, and hopefully King will give us some answers as he continues the story of their relationship in Batman/Catwoman.

Batman #85 also includes a three page preview from the incoming creative team. Writer James Tynion IV and artist Guillem March give us a peek at what they have in store for the title. And it seems the first thing that Tynion has in store is a Joker story.

This story has a bit of a unique angle, and oddly enough, it seems to be events in Bendis’ Superman titles that set the ball rolling. The story features a conversation between the Joker and one of his goons.

The henchmen informs the Joker that Superman has just publicly revealed his identity. He also mentions that there’s a rumour that the Joker knows who the Batman really is. But he’s saving it for something big. But if the Batman follows Superman’s example, then the Joker loses any advantage that knowledge gives him.

The Joker doesn’t take kindly to his goon’s questioning, which proves fatal for the unlucky underling. “Do you really think I’m ready for that…?! Ready for the kind of attack only one of us would survive?” the Joker berates his henchman.

Then the Joker sees the wisdom in the suggestion. “Actually… saying it out loud… that sounds like a hell of a lot of fun”. This is a chilling foreshadowing of the havoc the Joker could create using the knowledge of Bruce’s secret identity.

One could probably find missteps or problems in the totality of King’s Batman saga. Given that it’s spanned over 85 issues, plus some Annuals and Specials, there’s bound to be things that could be improved. However, I think the story has overall hung together very well. And as a final issue, Batman #85 very neatly wrapped the story up in a satisfying manner.

The one thing that will probably be denounced as a bad move is that King killed off Alfred. However, I feel that whether this is a bad move or a necessary step in the evolution of the Batman mythos remains to be seen. It will be up to future writers to build upon this development. Plus, there is always a good chance that DC will retcon Alfred’s death away and make the question moot. After all, it wouldn’t be the first time Alfred has returned from the dead.

King has produced an epic story that has brought Bruce to his lowest emotional point. However, the Batman has come out of this crucible as a stronger character. He has reaffirmed the inner core of hope that drives him to continue his battle against evil. Also, King has made a convincing case that the Batman can be happy without diminishing his effectiveness as a crime-fighter.