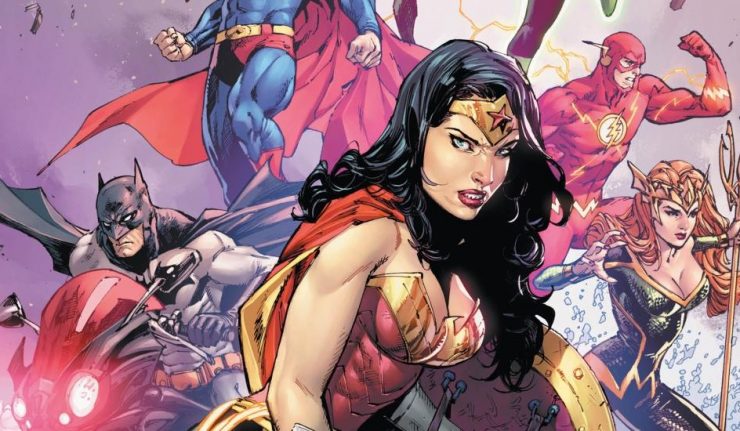 Justice League #37: “Justice/Doom War” part eight! The Justice League is making their final push against Perpetua, but some players they previously counted as allies may have been working for the other side the whole time! Who among Perpetua’s children will betray them and join Lex Luthor’s war on justice?

The Justice/Doom War is now nearing its conclusion. The League has lost the battle to keep the universe towards Doom. Perpetua is ascendant. Luthor and an army of Perpetua’s human/Martian hybrids have descended on the Hall of Justice to wipe out the League and its allies for good.

First off, I have to say how much I love Jimenez’s art. The two splash pages of the forces of Doom and the forces of Justice are especially breathtaking, especially the latter. It is awe-inspiring seeing so many of DC’s heroes from various times and realities charging into the ultimate battle of good versus evil.

And I love the idea of the Halls of Justice and Doom becoming armed vehicles that join in the battle. Perhaps it says something about the similarity in how Bruce Wayne and Lex Luthor think, that both designed their teams’ headquarters to have this capability.

The World Forger sacrifices himself, and possibly his brothers the Monitor and Anti-Monitor to get Hawkgirl, Green Lantern John Stewart, and Shayne back to Hall of Justice. With the team reunited, they are able to reach out to the people of the world and tip the balance back from Doom.

It’s interesting that they didn’t tip it all the way back to Justice, but rather they seem to have put the two forces into balance. They still have not won the battle, but Superman declares that they now have a fighting chance. They still have the main battle ahead of them. Victory is still uncertain, but at least it is now possible.

The main theme of the Rebirth era has involved a struggle between hope and despair. This storyline’s struggle of Justice versus Doom is, at its root, part of the same struggle. Justice and hope are inextricably interconnected, as are their opposing forces. After being driven to the edge of despair, the League manages to still find enough hope to face the ultimate battle with Perpetua. But will it be enough?

It would be a shame if Perpetua’s three sons have indeed met their end in this issue, but I have little doubt that we have seen the last of them. The World Forger states that he has been destroyed and re-formed “as beings like us do.” Sooner or later, they are likely to arise again.

Other than that, there is little to criticize here. Snyder has produced a believable way for the League to come back from crushing defeat, even though it seemed like he and Tynion had painted themselves into a corner.

Justice League #37 serves as a great lead-in to the battle of their lives. After laying the groundwork for months, we are finally on the edge of the story’s conclusion, and it looks to be the biggest battle of the League’s career. Snyder and Tynion have created an epic story here. If Snyder can stick the landing, this will be one of the all-time classic Justice League adventures.