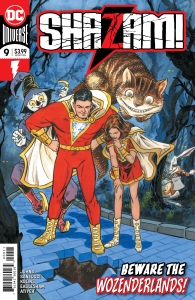 Shazam #9: After their terrifying adventure through the Darklands, Billy and the rest of the Shazam family find themselves going over the rainbow and through the looking glass into the upside-down, topsy-turvy world of the Wozenderlands! It’s a magical, multicolored metropolis where it’s always time for a cup of tea, a game of croquet or even a stroll down the Blue Brick Road—but it’s also ruled by the mysterious Wizard of Wozenderland, desperate for the power of the six champions!

Last issue, we saw Billy’s biological father, C.C. Batson receive the power of Shazam, becoming the seventh and final member of the Shazam family. I doubted that he would remain the seventh family member permanently, but perhaps that is Johns’ plan after all.

During this story, Mary, and C.C. lose their power, like the other family members have over the last few issues. The orginal Shazam, the wizard, informs the family that this is because Billy feels himself torn between two families: his foster siblings and his biological father. “Your greatest power is to share it with those you deem family. But your heart is torn by who your family is now.”

The wizard tells Billy he must choose between them, but Bill shows us that he has wisdom beyond what he has been lent by Solomon. He sees this as a false dilemma and chooses both, stating “Family is what you make it, these are the seven champions that I choose.”

So, it looks like C.C. Batson is part of the family – for now at least. Although this will introduce a new dynamic, having a member that is older than the rest and a parental figure to the group’s nominal leader. However, this is a totally new development. I quite like that Johns is deciding to explore totally new ideas. Johns is not just updating the Captain Marvel/Shazam mythos for a new generation, but he is also expanding it.

I was also glad to see Shazam #9 appear only a month after #8. This title has really suffered from the long delays between issues. There is a lot going on in this current storyline, and it’s hard to remember what’s happening from issue to issue. Hopefully, Johns is on track to keep the issues coming out on schedule from now on.

Now, that the power issues have been sorted and the seventh family member has been found, Johns can start winding up some of the other plot threads. There is way too much going on in a single storyline. With seven heroes, the wizard, Mister Mind, Sivana, Black Adam, and hints about the Monster Society of Evil, this book is way too busy. Johns really needs to simplify things somewhat. Hopefully, once the Magiclands story is wrapped up, Johns will embark on a less convoluted story arc.

Also, I still fee that C.C. Batson’s Shazam uniform looks like he stole it from Captain Carrot. At least that’s not a bad look, even if it’s rather derivative.

Geoff John’s Shazam isn’t bad, but it’s got some problems that he needs to get sorted. Now that he’s got the release schedule back on track, hopefully he can streamline the story a bit. This is a good title, but it should be a great title. I just hope Johns can realize the book’s full potential.