DC’s Legion of Superheroes has returned to shelves! The relaunch featured a first look at the updated designs of some Legionnaire favorites. Among the revamped characters is Dawnstar, a DC hero with Native American roots and a science fiction background. Dawnstar recently stepped back into the mainstream with appearances in DC Bombshells and the animated Legion of Superheroes TV series. Despite Dawnstar’s increased visibility, it is still somewhat of a rarity to find thoughtfully written native superheroes in comics. In short, indigenous representation in superhero stories is far from exemplary. Dozens of native superheroes have graced the pages of DC comics throughout the decades. Some, as shining examples of interwoven mythologies, while others are shadowed in sloppy storytelling and cultural insensitivity. By looking at some of DC’s most notable indigenous heroes, we can begin to map where comics can improve and what they’ve done well in bringing the original Americans to the pages of comics. 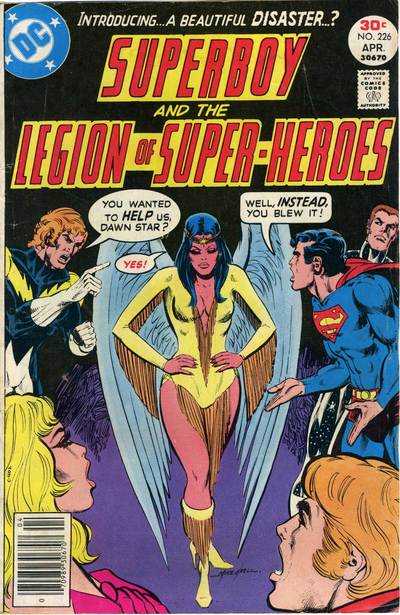 Dawnstar goes by no other name than Dawnstar. In the 13th century, many of her fellow Anasazi tribe members were abducted by a strange alien race and sent to the planet Starhaven. For unknown reasons, this race of aliens stole Native tribes away to distant planets and left them to create a new home. This forced “relocation” is not without contact from the aliens. Starhaven’s citizens have large, white, wings jutting from their backs as a result of genetic tampering on the part of their captors. Despite this, the Anasazi thrive on Starhaven. Dawnstar’s parents, Mistrider and Moonwalker, are able to create a flourishing business with the help of their daughter’s special gifts. She is able to safely guide passing starships through treacherous parts of the galaxy using her super-human abilities.

Dawnstar later receives an invitation to join the Legion’s academy and is shortly thereafter inducted into the Legion of Superheroes. Dawnstar’s powers are awe-inspiring. Sadly, though she was a main character in her first series, fans noted that her emotional responses to difficult situations were often nonsensical. Throughout early books, she switches back and forth from appearing unemotional and cold to an overreactive, sobbing mess. Rather than a reflection of her cultural heritage, these sloppy character choices can likely be accredited to a lack of effort in writing compelling female characters. Luckily, more recent portrayals of Dawnstar have presented her in a more balanced light, a nod to the impeccable strength of the young Starhaven hero. 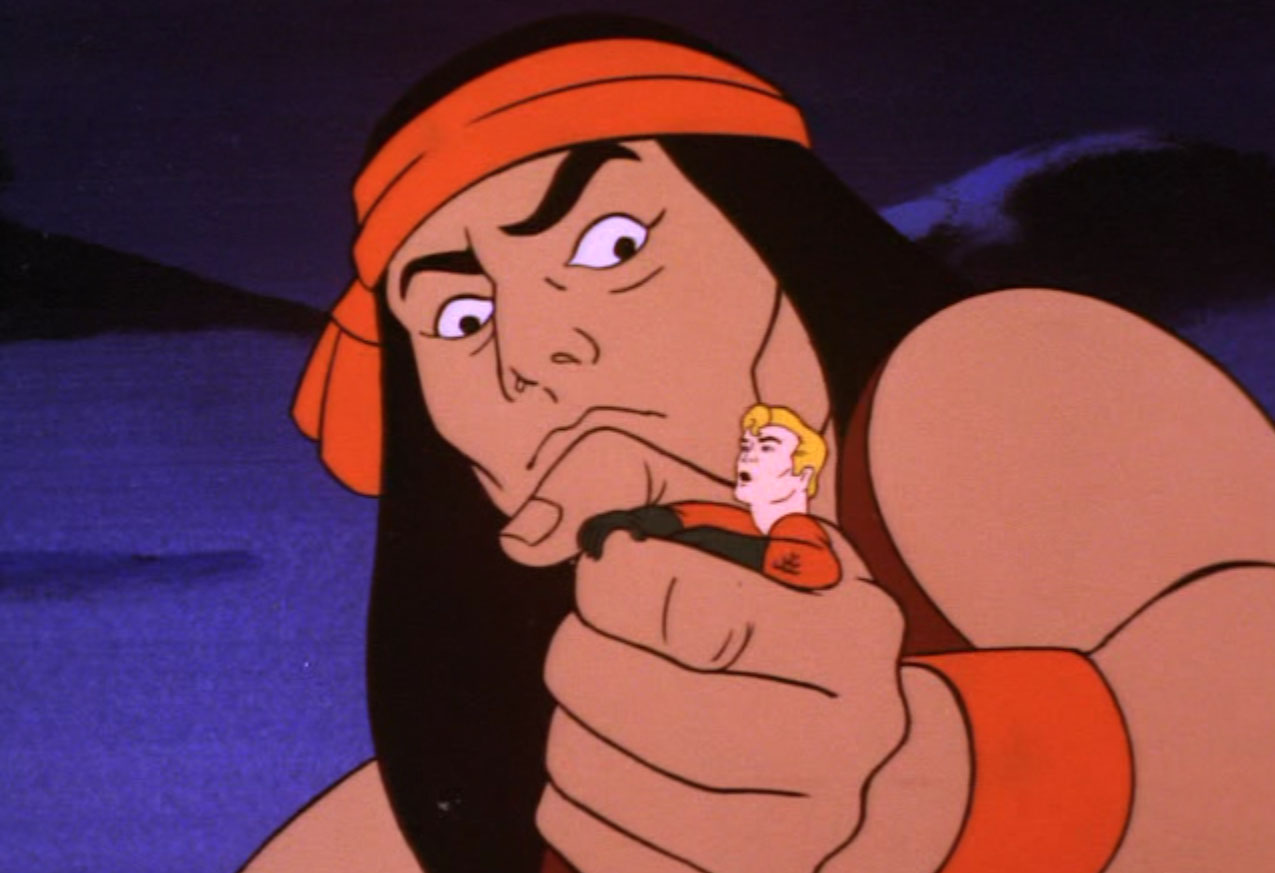 Apache chief first appeared in the popular Super Friends cartoons of the early 70s. Today, he remains one of the most well-known representations of indigenous superheroes in mainstream media. Because of this, some of the flaws in Apache Chief’s portrayal are especially problematic. In the early 2000s, he appeared in several episodes of the Adult Swim show Harvey Birdman: Attorney at Law but essentially functioned as a catalyst for jokes about the size of male genitalia. Even during his time with the Super Friends, Apache Chief spoke in “stereotypical Native American English”, often reciting vague and unresearched tribal philosophies.

According to his origin, Apache Chief was once attacked by a bear while walking with the medicine man of his people. For protection, the elder gave him a powder that would increase his physical size when applied. Apache Chief is able to control his size by speaking the words “Inuk Chuk”, a possible reference to large stone figures created by tribes that inhabit North America. Though his namesake, the Apache, dwell mainly in southern and desert regions of the Americas, his words of choice are likely derived from northern native cultures closer to Canada. Apache Chief was part of a push in the 70s to diversify the Superfriend’s ranks but this detail shows a lack of attention to accurately portraying the cultures they chose to incorporate. It should be noted that this is only on theory for the use of “Inuk Chuk”. Others suggest that it is a reference to Apache Chief’s real name. 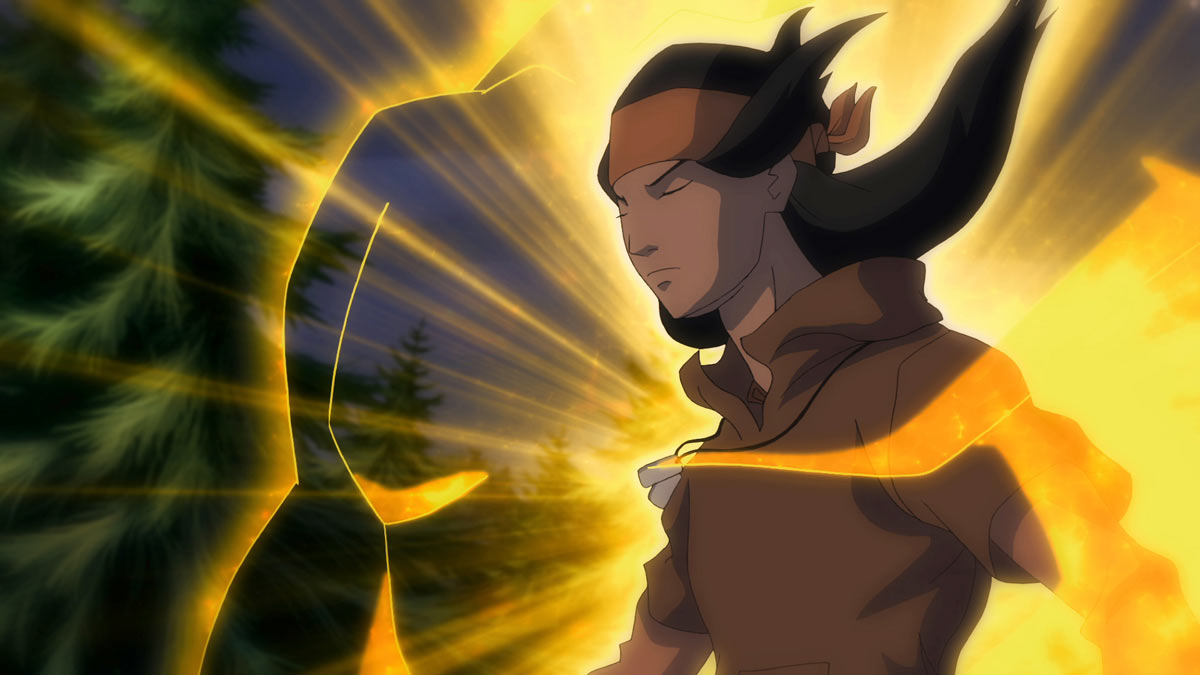 Recently, Apache Chief appeared in the hit animated show Young Justice as a younger iteration of the character. His Young Justice counterpart, Tye Longshadow, is skilled in the art of astral projection. Tye indicates a positive shift for Apache Chief. In his Young Justice appearances, Tye is not played as comic relief or limited by an uninspired superhero alias. 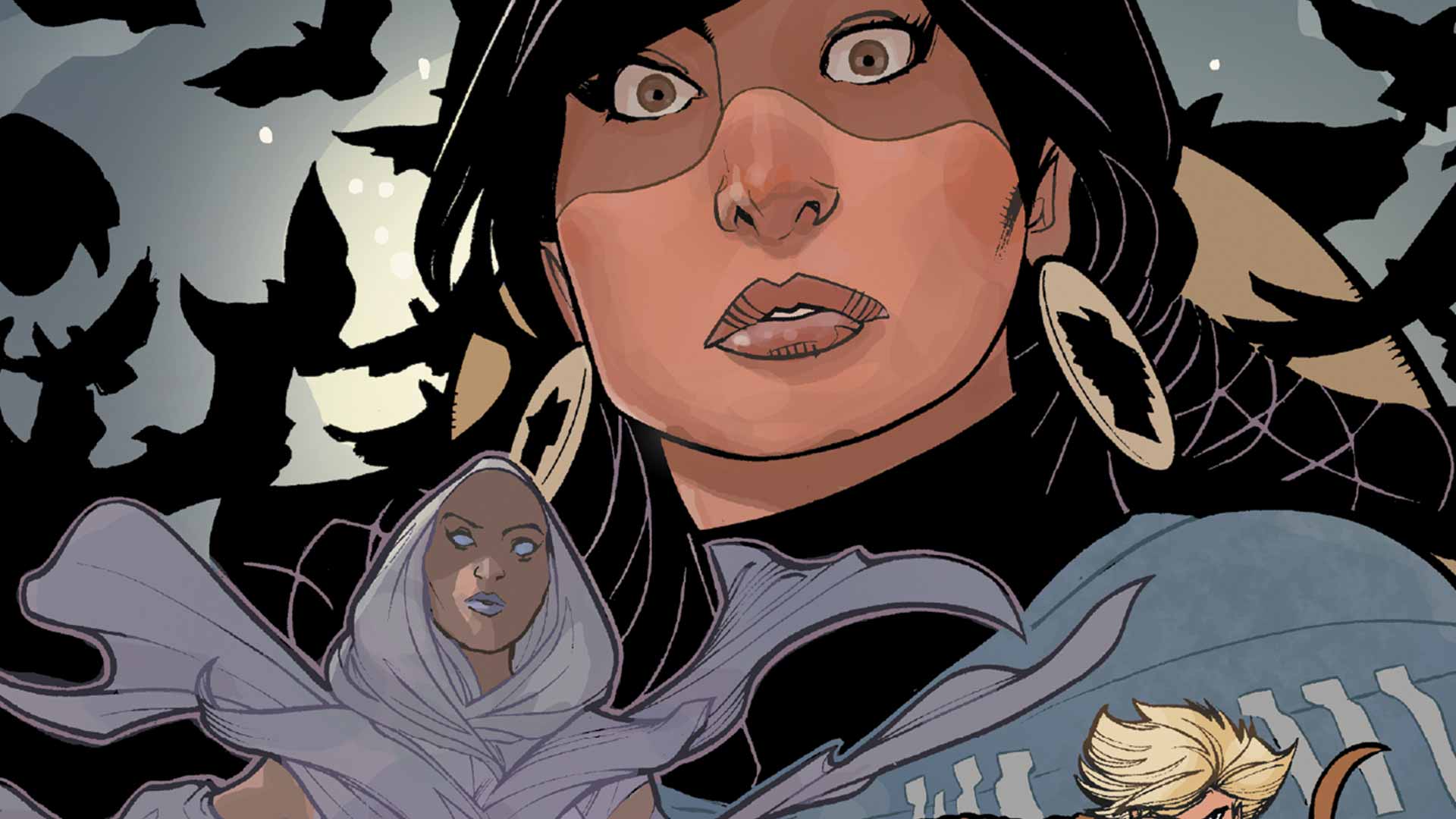 You may recognize Raven of the Teen Titans as a moody, black-clad, half-demon with terrifying psychic abilities. The Titans of Earth One are a version of the classic crew from an alternate reality, each with a new take on the heroes’ origins and powers. On Earth One, Raven is the granddaughter of a Navajo elder and inherits a great psychic burden. They live on the Navajo reservation in New Mexico, where Raven learns from her grandfather’s vast (and sometimes mysterious) wisdom. Raven has been haunted by visions her whole life. With the encouragement of her grandfather, Raven follows her visions to the rest of the Titans, arriving just in time to offset an unexpected threat.

Though this Raven’s existence was shortlived, she manages to be a fascinating reimagining of a popular DC heroine. Raven exhibits youthful wisdom, and above all else, strives to remain focused even in the face of danger. Raven of Earth One is no stranger to confusion and fear, but rather than falling apart or relying on a love interest, she develops her abilities and draws on the teachings of her beloved grandfather. 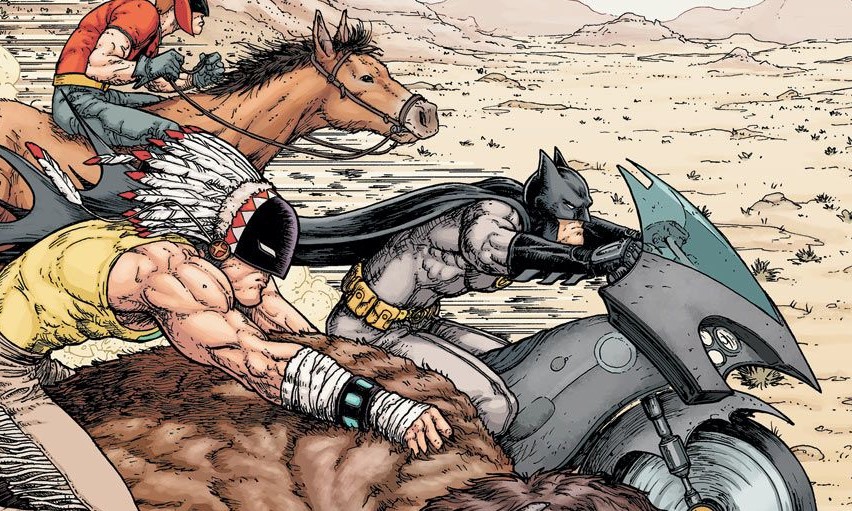 Man of Bats has existed in a variety of forms since the mid-1950s. We first hear the title in an early issue of Batman, during which a time-traveling Bruce Wayne takes up a Native American identity. Robin follows suit, becoming Man of Bats’ sidekick, Little Raven. Like many comic book characters of color in the 50s, the earliest depictions of Man of Bats are cringeworthy. The cover of 1954’s Batman #86 is a shining example of how not to depict native cultures. Eventually, the Man of Bats became a character separate from Batman and began to build a mythology of his own. His most recent incarnations show an effort to update William Great Eagle but there is still room for the Batman-inspired vigilante to improve.

In the New Earth timeline, William is a doctor who becomes inspired by the idea of Batman. With the help of his son/ sidekick, Little Raven, William fights injustice in his home state of South Dakota. Similar to the caped crusader, William has no real superpowers. Instead, he relies on intellect, ambition, and cool weapons. Above all else, William is a skilled healer. Even during brief stints away from his vigilante persona, he continues to help others through medicine. 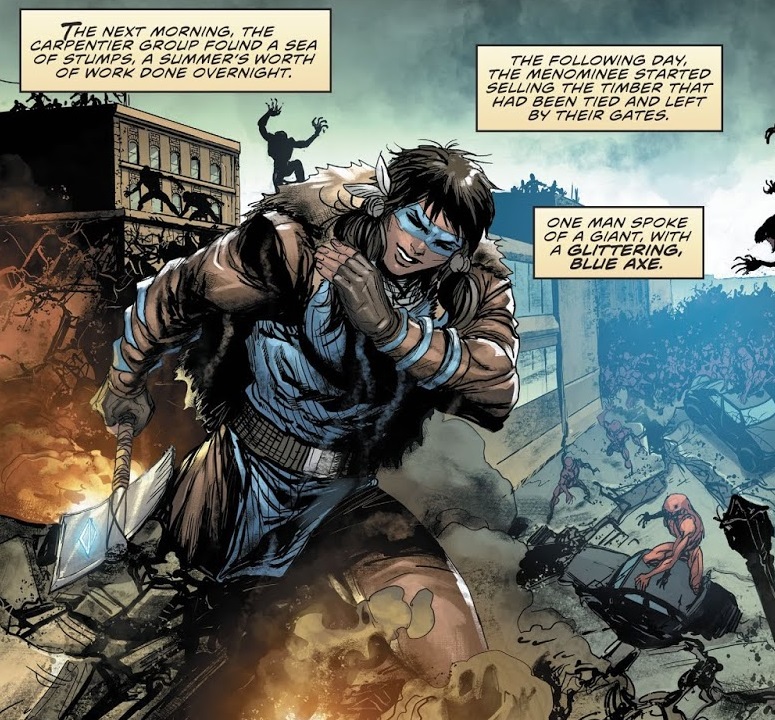 Keshena Carpentier was created in the universe of the wildly popular Dark Nights: Metal books. Her story begins in the 19th century. The young Carpentier is a member of the Menominee tribe and the result of a mixed union between her tribal member father and a colonial logger’s daughter. Her mother tries desperately to hide the identity of her father, but upon discovering the truth, her disapproving grandfather decides to punish the Menominee for allowing one of their people to get close to his daughter. He decides to take away their timber, thus destroying their livelihood. Luckily, the tribe is protected by none other than Carpentier. Already gifted with amazing powers and a legendary ax, she cuts down the entire forest, singlehandedly, in one night and gives the valuable timber to her tribe. As the hero Timber, Carpentier and her ax rise to folktale glory and are later recruited by Immortal Man.

Timber’s story is rooted in classic American folk tradition. She represents the sort of hero that rises from oppressed populations to become the security the system fails to provide. By the time readers are introduced to her, Timber is a legend of her own accord. True, Timber has yet to gain much mainstream popularity but it is not out of the question to trust that we’ll be seeing more of the immortal, ax-wielding defender in the future.

Some concepts and design choices are echoed through multiple characters listed above. Among them are:

What do these patterns mean? They indicate an impression on the part of DC creative teams about what it means to be Native American. While that does not imply whether or not these choices are in good taste, it does highlight a need for diverse storytellers in comics. There is nothing more honest than allowing cultures to share their ideas of heroism through their own eyes and with their own voices. Only then can we rest easy knowing the characters we enjoy are created with authenticity and respect.

This list does not include all of DC’s Native American heroes. Though the road to admirable representation has been full of missteps and bad storytelling, the recent incarnations of many of these heroes have been re-worked to include accurate cultural references and complex personalities. Sadly, there are still few native voices crafting superhero stories for big publishers like DC. There is a wealth of mythology and unique artistic beauty to be found in well-written native characters. As DC grows to explore new worlds and bring in more dynamic creative energy, we can hope that Dawnstar and the others will soon be joined by a legion of thoughtfully crafted Native American heroes.

What’s your take on the characters mentioned in this article? Do you have a favorite indigenous DC hero that was not? Let us know in the comments below!

Superman and Lois Series Officially Ordered By The CW