Review: The Question: The Deaths Of Vic Sage #2

Review: THE QUESTION: THE DEATHS OF VIC SAGE #2 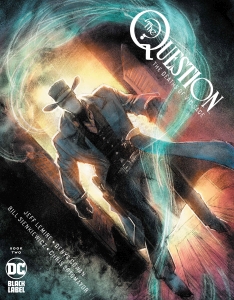 The Question: The Deaths of Vic Sage #2: In modern-day Hub City, Vic Sage died. And then he woke up. In Hub City…in the 1800s! The legend of the Man with No Face rides across the Old West, discovering a shocking connection running through history all the way to the day he died…and pointing to more carnage yet to come!

I saw a post on Facebook recently bemoaning the fact that there aren’t any good Western comics anymore. And for much of the issue, The Question: The Deaths of Vic Sage appears to be a fairly standard Western story. But near the end, it veers into Weird Western Tales territory.

The story starts in the Hub City of 1886, where we meet a rather familiar blacksmith named Viktor Szasz (not to be confused with the Batman villain, Victor Zsazs). Readers of the original Denny O’Neil Question series may recall that Vic Sage’s birth name is actually Charles Victor Szasz, implying a connection between this man and the modern day Question.

Viktor is haunted by his participation in a massacre of a Native American village. This guilt leads him to interfere with a with the town’s racist treatment of a black man, including saving him from a lynching. This impulse to fight against racism rings true, as Vic also demonstrated a dislike for racist behaviour in the O’Neil series.

There was also a chilling similarity between the town’s priest and the character of Reverend Jeremiah Hatch. Both are supposedly men of the cloth, but they use their position to influence others to commit evil acts. The priest incites the townspeople to hold a lynching, while Rev. Hatch manipulated Hub City’s crooked mayor, Wesley Fermin. 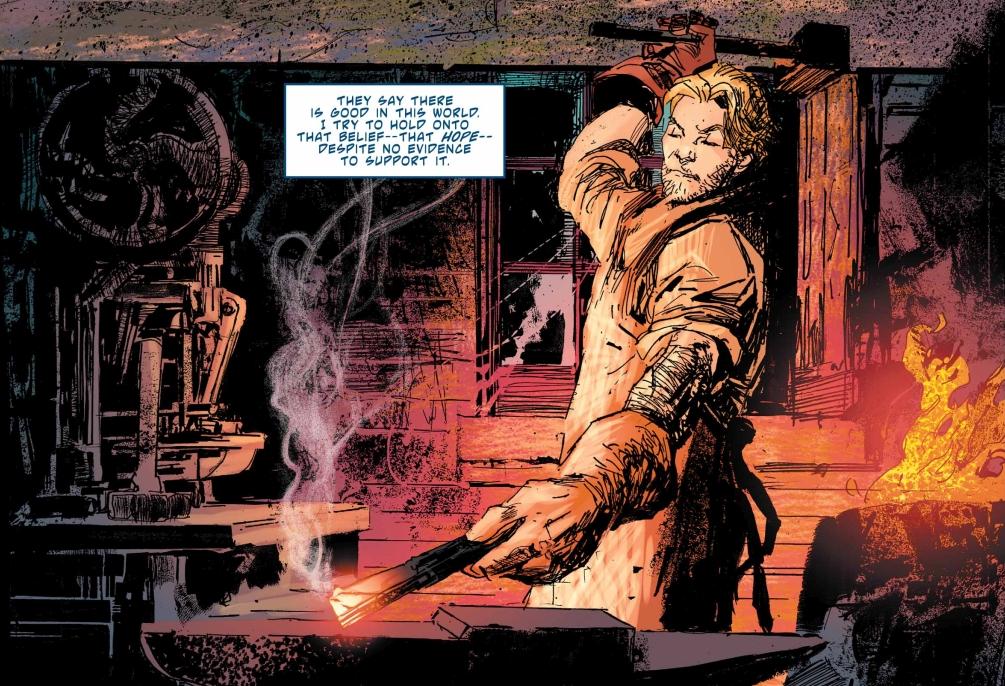 Viktor is saved from the angry townspeople by a strange woman in Native garb, who tells him of an evil entity, which she calls “the man with a thousand faces”. According to a vision Viktor has, the town’s priest is apparently one of them, making me wonder if Reverend Hatch was also one of his faces.

Viktor also sees a vision of Vic in the modern era, similar to Vic’s vision of Viktor in the past last issue. The connection between the two seems stronger than blood relation – perhaps Vic is the reincarnation of Viktor.

This mysterious woman informs Viktor with a prophecy: “He can’t die, except by the hand of a man named Charlie”. Viktor reveals that his full name is Charles Viktor Szasz, nearly the exact same name as his modern counterpart.

I also find it somewhat fitting that this being is described as having a thousand faces. Who better to pit against a man with no face? And Viktor does become a man with no face, thanks to a mask the woman puts on him, stating that it’s his true face. 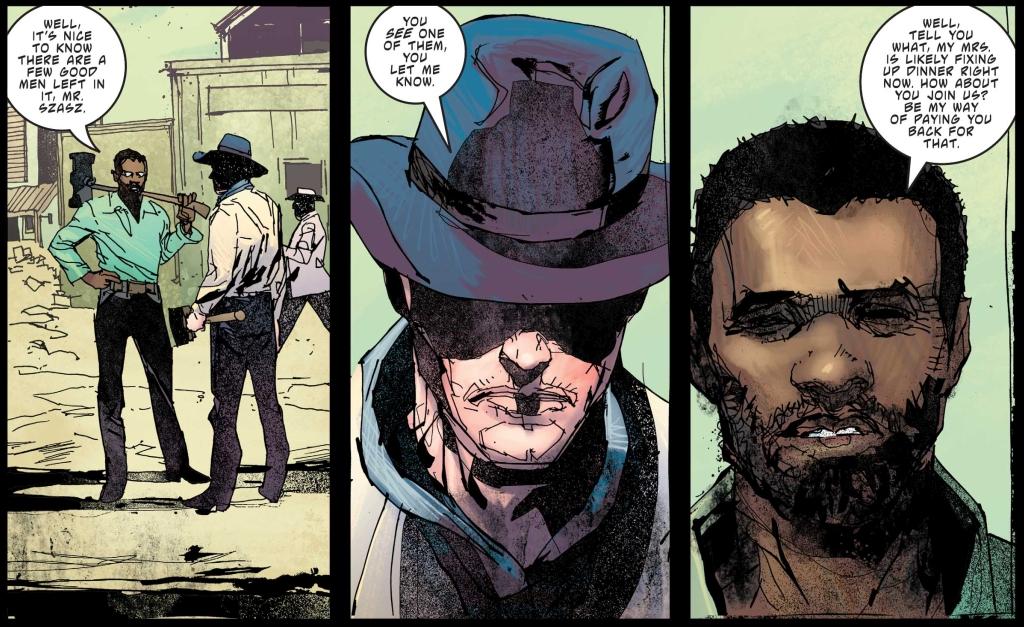 Viktor becomes a cowboy version of the Question, and again massacres a village. This time, it’s the racist townsfolk of Hub City that he Kills. However, instead of killing the man with a thousand faces, he is killed by the villain wearing the priest’s face.

Then we get an epilogue in the year 1941, hinting at another Question between Viktor and Vic. We see a man waking up from a dream of Viktor’s death. He then writes on a notepad the words: “Man with no face… Man with a thousand faces???”. I am guessing that this is yet another Victor Szasz, who will become yet another incarnation of the Question.

Also, adding the three question marks was a nice touch.

I wonder if next issue takes place in 1941, if any of DC’s Golden Age characters will make an appearance. Maybe a member of the JSA or All-Star Squadron – or perhaps Dian Belmont, the Sandman’s lady companion.

The only issue I have with this series is that I would like some confirmation whether this is set in the current DC continuity or not. It certainly could fit in the current continuity, considering that Vic Sage recently appeared in Event: Leviathan and Lois Lane, despite his supposedly being dead. When meeting with his successor as the Question, Renee Montoya, he acknowledges that he was dead, but does not explain how he has returned to the land of the living. Perhaps The Deaths of Vic Sage will offer an explanation – assuming it’s actually set in the canon DCU. But given that a lot of DC’s Black Label line seem to be Elseworlds stories, that it might well be in a different continuity.

Lemire is doing a masterful job of expanding the mythos of the Question, while keeping the feel of the Denny O’Neil’s masterpiece series. Cowan and Sienkiewicz are also doing a great job of recreating the visual feel of the book. I don’t know whose idea it was to bring them back to the Question, but it was a brilliant idea to do so. I very much look forward to seeing what happens in 1941 next issue.

Review: The Nice House On The Lake #11

Review: The Nice House On The Lake #10