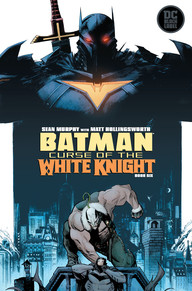 “Batman…Thanks for trusting me!” – Harley Quinn

Azrael, now costumed in his Batman uniform, breaks into Arkham to free the Joker and annihilates everyone in their path.  Batman pays a visit to Jason Blood for a history lesson on his family.  Harley suits up to aid Batman in finding her twins who have been kidnapped by Joker.  And we haven’t even scratched the surface of two epic battles….the landscape is forever changed in Sean Murphy’s “BatUniverse”!

This is the sixth installment of Batman: Curse of the White Knight! 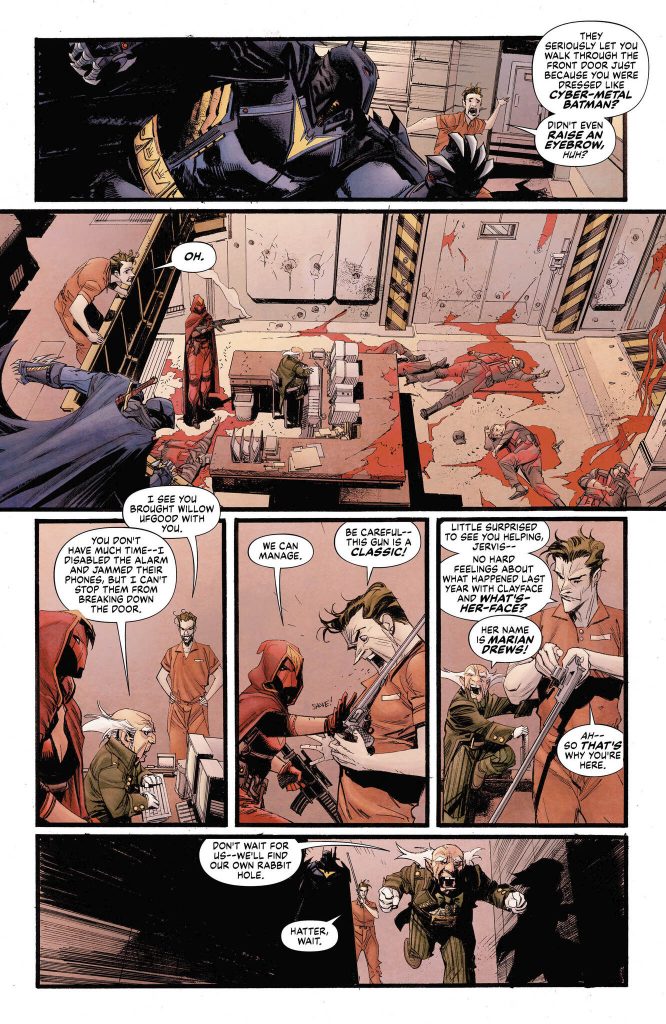 Sean Murphy continues to take the recipes of prior Batman canon and offers his unusual and thorough take on Bruce Wayne and his origin.  Never has a book series offered more of a thorough re-imagining of canon since the introduction of Scott Snyder’s Court of Owls.

That being said, the roller coaster ride continues with the Joker being broke out of Arkham by a newly minted Azrael in his Batman costume.  Remember when you saw the first “batarangs” he used.  Well…. they are here. 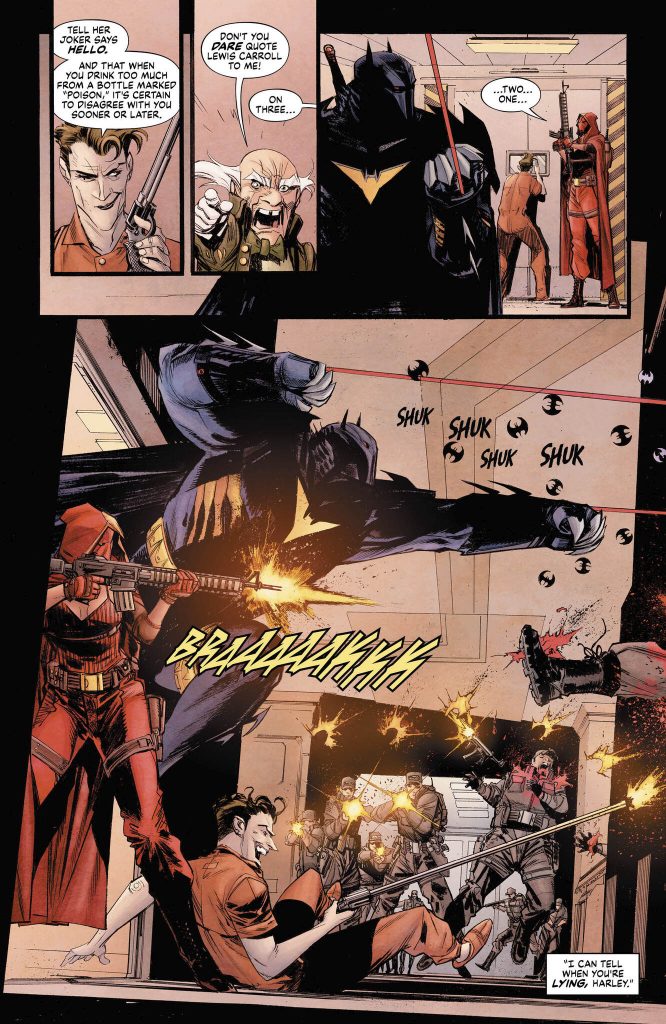 Murphy pays tribute to all walks of Batman’s career and hides/reveals/celebrates them within the pages of his writing.  You’ll find no story spoilers here, but look for a wonderful exchange immediately between the Joker and the Mad Hatter.  Great writing!

The weaving in of Jason Blood (adorned as a priest) is real tongue in cheek stuff.  And the new origin of the Wayne blood line paints a picture that exceeds Scott Snyder’s work.  Enough cannot be written praising the historical look back at Bakkar and Edmond Wayne.

This is Murphy’s sandbox and his work with Batman, Mr. Freeze, and now announced, Catwoman, provides us with optimism that his nods to other time lines among the comics and movies is on the horizon. 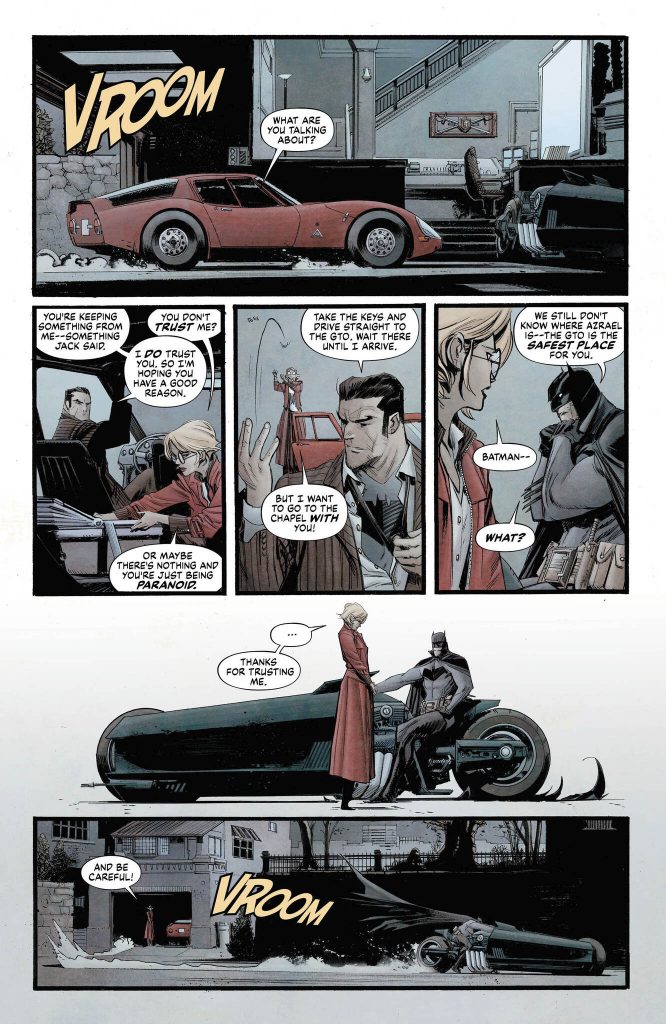 Murphy draws an awesome Batman/Azrael.  I am still drawn to his renderings of a Batman that is almost that of Marvel’s Wolverine.  And Harley…whew.  Has there ever been a better drawn Harley as of late as she is both devoted mother and heroine in this tragedy of a story.

“Suit up!” Batman’s words resonate as they go after the Joker/Jack Napier to get Harley and Jack’s twins.

Duality…who needs Two-Face.  Murphy draws the struggle between the Joker and Jack Napier with every nuance.  We are literally drawn into (no pun intended) this struggle and we don’t know which way to lean. 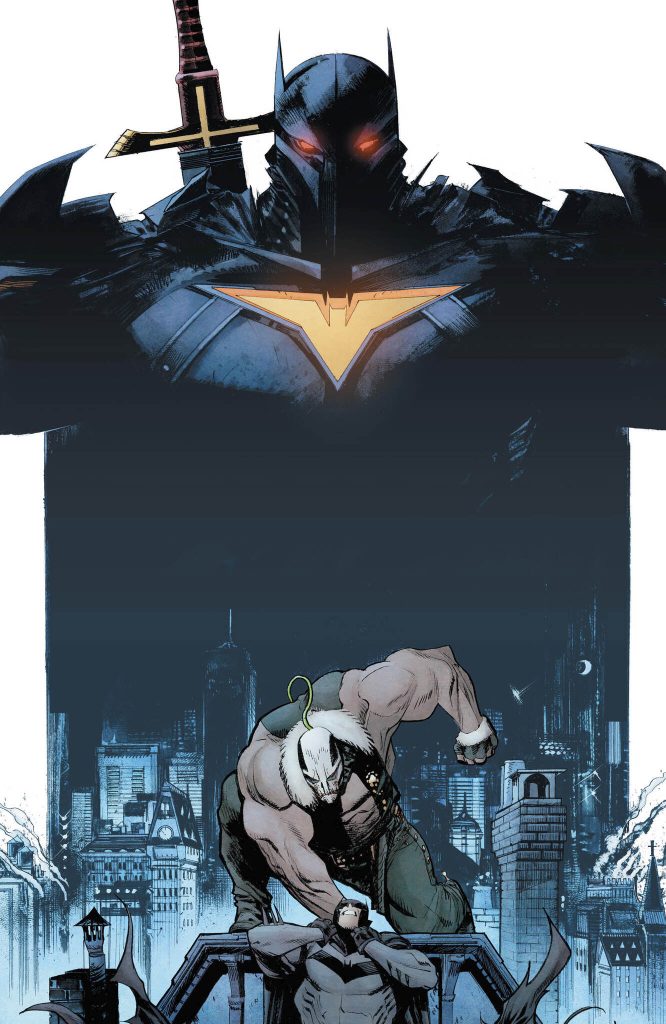 Dick Grayson makes spotted appearances and he’s a vital part of the Batman mythos.  I want Murphy to build more Robin into this playground.

White Knight should be on your shelf!  It’s a must read to get you into this series that Sean Murphy is painting for his readers.  This issue shakes it down to the core a bit.  Again, no purposeful spoilers here, but the last few pages make you gasp for breath!