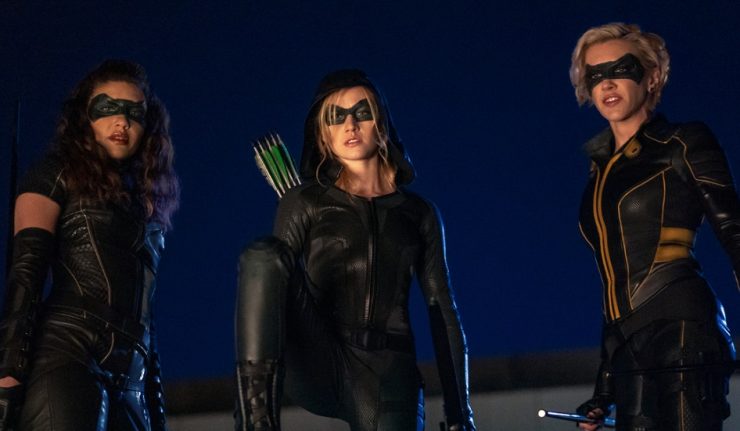 In 2040, Mia Queen has everything she could ask for, but when Laurel Lance and Dinah Drake come to her for help, she’s confronted with past memories and a mantle bequeathed to her by her father.

The effects of post-Crisis are thankfully continued; it makes sense that the changes Oliver had made in merging Earths together would carry over into the future. As a backdoor pilot for Green Arrow and The Canaries, this episode is deliberately designed to stand alone as the first episode, but not to the point where it lost its Arrow feel. The writing reflects on the events of both this past season and previous, such as the journey of Laurel from villain to hero in her exchanges with Mia and Dinah. More on that later. The esthetic of Star City had changed; no longer a dystopia, the city shines as the bedrock of future technology, no doubt from Smoak Tech. The status quo is also different; no terror attacks for two decades, vigilantes are once again heroes and Oliver Queen is honored Rocky style with that amazing statue. Personally it’s an upgrade from that shrine in the future Hall of Justice; although solemn, they could’ve put the suit on a better fitted mannequin. It’s clear that, in his omnipotence, Oliver enabled his son and daughter the opportunity to grow up together without the evils that plagued Star City to burden them. Overall, the key was to establish Star City at its strongest only to introduce the counterpoint through Laurel of what could happen a year from now. What works is that whatever changes OIlie made to the timeline cannot account for everything. There are cracks to this perfect world, much as how there were eight years ago, and the need for a Green Arrow to arise. In that sense, what Kreisberg and Guggenhiem created is remembered and maintained: The elite concealing depravity.

The writing focuses on the core cast and supporting characters. The changes to Mia’s history are front and center and has the shock factors. The cage fighter is now a college graduate and socialite and engaged to former Deathstroke John Diggle Jr., or “JJ”. And clever role reversal to see Connor the black sheep, whereas before he was the heir apparent to Diggle Sr. in ARGUS. Via Cisco tech – nice Flash and Legends tie-in, by the way – the viewers are in the same situation as Mia as the world as she knows it is ripped from her. Prior to it she has everything she could ask: A loving older brother she grew up with, a college degree, and love. Oliver did his best to give his kids a fresh start. It also takes away the initial assumption that Mia had been dreaming. This world is real and permanent and Kat delivers a great performance in her frustration and confusion. The man she loves she also remembers as the cold-blooded killer of her best friend, Zoe. In that sense, she is given a dual identity as both sets of memories are real and she is now an amalgam of both timelines. A young woman trained by one of the deadliest fighters in the world, yet also a popular socialite and billionaire heiress. Watching her navigate through this new Star City with a renewed harder edge and distrust holds the viewer. Her interactions with JJ post-remembrance are cleverly written. The irony is that just when she remembers the love she has for the new JJ and they reconcile, an unknown force reawakens Deathstroke in him. Her chemistry with Katie is, at times, antagonistic, yet reluctantly maternal. On the subject of facades and being true to themselves, Laurel is the best choice to get through to Mia. Like Mia, she is the hard stone with no sugar-coating. What also works is the reluctance to suit up in that outfit Oliver gave her. Besides abandoning her new life, Mia wore that suit when Oliver sacrificed himself – the first time – during the Crisis. She fought side by side with him, then get pulled out of the fight to let him die alone. There’s that level of gravitas with that hood, and the lack of belief in her own ability to carry on his legacy. My guess is that it will be an ongoing struggle for her.

The wardrobe designers were smart in making slight tweaks to Mia’s costume. My previous complaints about the lack of green in what appeared to be a black suit were addressed. And, of course, the hood and the mask were spot on Green Arrow. The mask differs from Stephens and relates more to the Canaries, who are her primary mentors now. The inflections that Stephen injected to Oliver Queen are hinted at in Mia’s portrayal both in and out of the hood. The poetic sense of Mia collapsing in the shadow of her father’s statue is not lost.

The mystery of Dinah Drake in the future is a clever subplot that will be covered. The writing makes use of Juliana Harkavy’s musical skills via Dinah’s new life as a nightclub owner. This also solves the mystery as to why both Laurel and Dinah are so youthful as opposed to their older counterparts last season when 2040 was introduced. The notion of her being deposited in 2040 without rhyme or reason gets to the viewer. No one remembers her, neither as SCPD Captain or The Black Canary. With that in mind, she’s also lost Team Arrow, especially Rene and Zoe as they knew her. Zoe is a socialite as opposed to her protege, and Rene no longer is a mayor caught up in corruption. She is a free spirit and, like Mia, a paradox to this new world. The clock tower apartment feels very reminiscent of Sarah Lance’s hideout in the second season. The chemistry she has with her frenemy Laurel has softened from the antagonism, although they still have their moments. The big sister dynamic and how they get along is kind of like how an artist described the Beatles. How John wrote the music but it was Paul that made it smooth. In this case, Laurel is the hard truth, but it’s Dinah that smooths it out.

The music set the tone in the pilot of Arrow all those years ago. Blake Neely’s work gave the series its voice. It’s not here. The replacement with techno music and the latest tracks are reminiscent of how all the WB shows in the early 2000’s featured established aritsts’ work. The fight choreography is good, but there’s too much wire work in some cases. Arrow worked in that the action was very grounded and gritty. That’s not here. Future or not, there has to be some tangibility because none of these girls can fly. Story wise, I’m surprised that Mia didn’t use Cisco’s device to wake up William or Connor. Two people she considered her family in her old life. Even Zoe. Whether it’s because she’s still getting her bearing is understandable. Also, if Dinah doesn’t have a past, how the hell was she able to buy that bar and that loft above it? Where did the money come from? Did Ollie magically fill her bank account? Does she have a past at all? Also, given we’ve met Helena’s daughter, Bianca, who’s the father? And where did the aunt and uncle come from? While it’s important to establish the tone, the rapid fire delivery in a self-contained episode goes a little too fast.

I’m sad to say that I give this episode a 3.5/5. I was hoping to give this episode an A-rating, believe me, but without such things as a slower pace, proper music, and more grounded action, there was not much gravitas to match the Arrow pilot. I’m not faulting the performances of Kat, Juliana, or Katie, please understand. The Green Arrow costume has enough elements to qualify as the mantle being passed, and the return of the dual identity works in the heroes’ favor. I realize it’s meant to stand on its own and this episode had enough loose ends and subplots to garner interest, but the lighter tone works against the purpose in that sense. I sincerely hope that the series in its entirety have something more to offer. With the now-complicated relationship between Mia and JJ, I’m sure that’s insured. In the meantime, however, I look forward to how the present-day cast will say goodbye to Oliver in…I can’t believe I’m writing this…the series finale of Arrow. All I have to say is I sincerely hope they pull out all the stops. See you guys next week and good luck to the cast of Green Arrow and The Canaries.