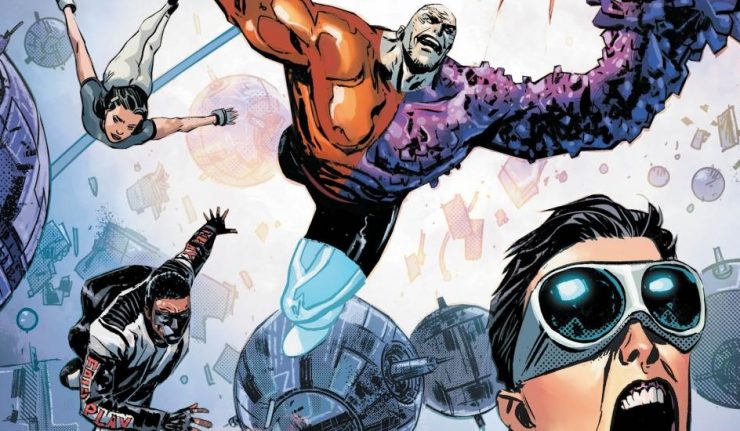 The Terrifics #23: Mr. Terrific, Plastic Man, Metamorpho, and Phantom Girl have stopped the Terribles from turning back time on earth…so, yay! Solicit over, now it’s party time! And…wait a tick…hey, Bizarro! Get away from Bgtzl! That’s a bad Bizarro! Very, very bad! You’re not supposed to alter that entire planet’s position in space-time! Wait…you have to talk to him backward, right? That’s a very good thing you’re…um…not doing, Bizarro!

A time loop is a standard fixture of science fiction. The characters repeat the same events over and over until some way is found to break the loop. The Terrifics, along with Bizarro and the Terribles, are stuck in such a loop. And at the end of the loop, Ms. Terrific is sucked into a time vortex to her apparent death.

Ms. Terrific realizes that Bizarro is somehow looping time, but too late to act on it. As she tells Mister Terrific, “We have to make out memories stronger! So we can remember earlier! Don’t use your brain, Michael use your –“. Michael realizes that he the final, unspoken word is “feelings”. Mister Terrific has to step outside his comfort zone and rely on his emotions rather than attack the problem with his rational mind.

I also liked seeing the Terrifics de-aged as children. It makes me wish that DC didn’t have such a dearth of child heroes. Every time DC creates any interesting younger characters, it seems that it’s not long until they are aged into teenagers. The foremost example being Jon Kent suddenly being aged from 10 to 17 so that he can be used in the Legion of Super-Heroes reboot. Even though the Terrifics will soon be back to normal, I would really love to see a Li’l Terrifics book from DC Graphics Novels for Kids.

I really liked the two page spread where Davila and Cifuentes presented us with three sets of almost identical moments from the time loop. However, Yang’s dialogue varies from one set to the next, showing the gradual changes through each iteration of the loop, as the team moves closer to breaking the cycle.

Then we see what happens to Paula after she is pulled into the time vortex. There she finds herself confronted by multiple iterations of herself. Presumably, there is one for each time the loop has repeated. But why does each of these Ms. Terrifics have wings?

I also got a chuckle from Yang’s use of the next issue caption to inject a bit of extra humour into the issue’s final panel. As the team breaks the loop by flying into the time vortex, along with the villains, Phantom Girl exclaims, “What is even going on?!”, while the next issue blurb responds, “Next: We don’t know either! Aaaah!”.

I have no complaints with The Terrifics #24. Gene Luen Yang once again has shown himself to be fully capable of filling Jeff Lemire’s shoes as writer. Also, Sergio Davila and Vicente Cifuentes have portrayed The Terrifics in a style that is ideally suited to this offbeat team.

The Terrifics #23 is a fine example of why this title continues to be one of the most fun titles to read DC’s lineup. Yang provides the ideal combination of humour and exciting adventure that makes this title a true pleasure to read.