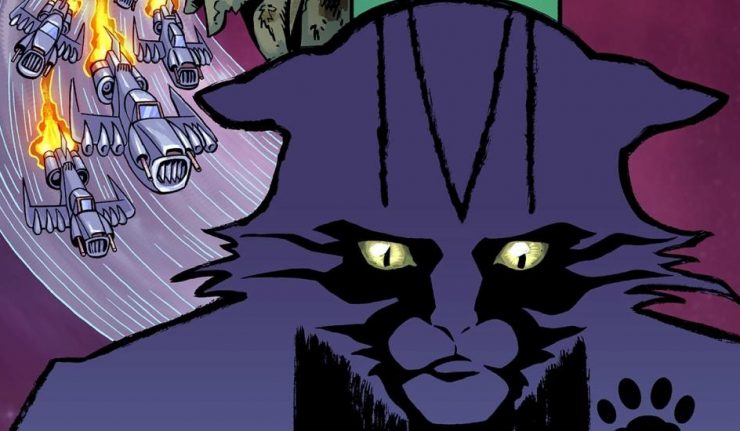 Captain Ginger Season Two #1: The acclaimed saga of cats in space returns for a devastating second series! Captain Ginger and his feline crew embark on a vast, six-issue adventure when they follow a mysterious hyperspace signal to the home of their unknown canine “cousins.” But trouble aboard ship may doom them before they even meet the dogs!

Captain Ginger returns for a second “season”, a charming series with a rather unique premise. In a future where the the human race has survived, and cats have risen to take their place. Well sort of. The cats are humanoid and intelligent, but they are somewhat hampered by traits that are throwbacks to today’s domestic felines.

This series is a delightful mix of comedy and dramatic story. There is an underlying story of the cats struggling to survive as they traverse space in a lone spaceship. They have inherited their ship from their previous masters, whom they call “the Feeders”.

The humour is derived mainly of the traits of today’s cats that still persist in their advanced humanoid form. They’re easily distracted, territorial, and they hack up hairballs.

One particularly funny joke from the previous miniseries was the revelation that the crew relies on the use of littler boxes, and how difficult a job it is to maintain and clean them. Meanwhile, they puzzle over the ships’ toilets, having no clue as to what the Feeders used them for and why there were so many of them.

I suppose the most obvious comparison would be to the the character Cat from the British TV comedy, Red Dwarf. There are some obvious similarities. Both the Cats of Captain Ginger and Red Dwarf’s cat are quite similar in some ways. Both exhibit humorous traits of current day felines that would be bizarre or inconvenient in a more advanced species.

However, there are some differences. Cat is a notoriously cretinous individual, much more so than most of the cats in this book. On the other hand, Cat is supposed to be an especially stupid member of his species. Also, the Cat doesn’t have an actual name. His is just called “Cat” because he is a cat. In Captain Ginger, all the cats have names, some like today’s cats might bear, like “Mittens”.

Captain Ginger: Season Two #1 introduces us to a new adversary for the space-faring cats. dogs… sigh. That seems rather obvious to me, and somewhat a cliche to pit cats against dogs. I suppose that throwing dogs into the story might be appealing for dog people, but unfortunately, I”m a cat person, so dogs don’t hold much appeal for me.

However, maybe Captain Ginger will actually establish cats as the superior species. Generally, cats are usually cast as the villain, as shown in years of cartoons, or cat vs. dog conflicts end up a draw. I would love to see a story where cats get the upper hand for once.

Captain Ginger is a story tailor-made for science fiction fans who are also cat people. When I first read it, it immediately became one of my favourite titles. And if you’re a dog person, well they’re here too. Captain Ginger Season Two #1 is a welcome return of a great series and was well worth the wait.