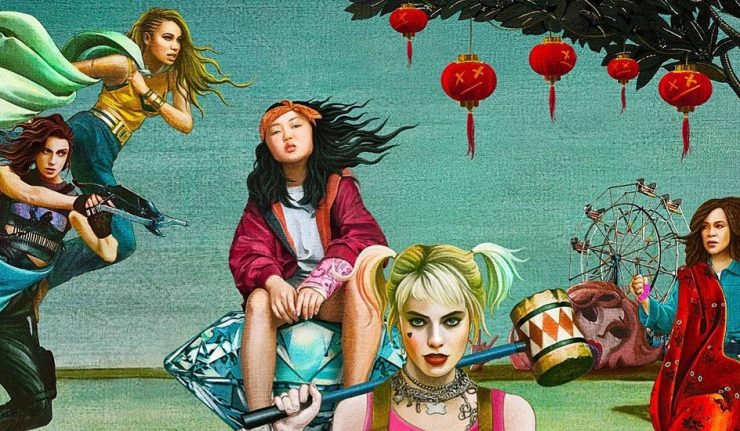 It’s open season on Harley Quinn when her explosive breakup with the Joker puts a big fat target on her back. Unprotected and on the run, Quinn faces the wrath of narcissistic crime boss Black Mask, his right-hand man, Victor Zsasz, and every other thug in the city. But things soon even out for Harley when she becomes unexpected allies with three deadly women — Huntress, Black Canary and Renee Montoya.

With the first Wonder Woman, Warner Bros and DC set a precedent for empowering movies led by female characters, but also movies made by female filmmakers. I’d like to start this movie review by saying that with Birds of Prey (affectionately referred to as “BOP” on the big social media outlets), we have a story featuring 5 out of the 7 lead characters being female, each with their own story arcs that contribute to the overall plot. Themes of toxic relationships and masculinity are also explored, giving a big-budget face to some serious issues we face in today’s society.

But the empowerment just doesn’t come from character growth. It also comes from some kick-ass, knock-down, drag-out action sequences. We see bones get broken and windows smashed. We get gunfire and roller-derby! People love action, no matter the gender. It’s one of the reasons why the Mission Impossible movies are still going, and one of the reasons why people also love John Wick. In BOP we have a movie where the fight scenes are brutal, the action is fast paced and the badasses are girls.

Speaking of badasses, you can’t have a “Birds of Prey” without Black Canary and Huntress. Played by Jurnee Smollet-Bell and Mary Elizabeth Winstead respectively, these two get to showcase their characters in faithful and dynamic ways.

The movie has some great cinematography, something that DC movies do so much better than any other comic-book-based cinematic universes that currently exist. The compositions and the color palette are so vibrant, but also emotional. People tend to forget that film is a visual medium, and if you can’t tell a story through your lens then you aren’t doing a good job. BOP is a movie you can watch with the sound off (not that you’d want to [more on that later]) and still understand what’s going on just based on the strength of it’s visuals.

Bumblebee‘s Christina Hodson is the single credited screenwriter for this film, something that is extremely rare when it comes to big-budget Hollywood movies, and even more rare that it’s a female. Usually a movie like this will now have 4-6 screenwriters and *maybe* one of them will be a woman, but most times not.

Here, her and director Cathy Yan have given each of their female characters subtle touches of deep humanity. Each of the featured women is flawed in some way, but that is what brings them together. That is what will help them heal from whatever has hurt their pasts. It makes us as audience members relate, even though we’re not those characters on-screen and may not be the same gender.

Speaking of Cathy Yan, she’s been a producer more than anything, but has directed a single independent feature film plus some shorts. What she does here for her first big-budget film is actually quite awesome. Most indie filmmakers try their hands at big-budget films but don’t get asked back to do more. Remember X-Men Origins: Wolverine? Yikes. Anyway, this first time big-budget filmmaker has given us a film with swagger, with bravado. Confidence is key for survival, and this movie walks with its chin up and its shoulders back.

The soundtrack to this movie also really pops, adding to the vibrancy of the overall run time. The all-female compilation spans different genres too, from modern-day hip-hop to heavily distorted alt-rock to jazzy night-club ballads.

Movie posters have become a lost-art, but thankfully the ones for this movie “gave no effs.” I’m sure you have seen them around town, but here’s a closer look at their many fun, wild designs.

I was also a fan of how their costumes were modernized. Thankfully, we don’t get too many deviations on characters’ “comic vs movie” looks like we used to BUT, I will say this: sometimes, what works in a comic doesn’t work in a movie. Sometimes it’s a character trait, sometimes it’s a super-power and sometimes it’s a costume.

Speaking of super-powers, HELL YEAH CANARY CRY. Sure, we’ve seen the power before on screens, but never as cinematic, never as so……momentously destructive.

I loved seeing Gotham City return to being shot on the streets of Los Angeles. I’m from there, and L.A. hasn’t been home to Gotham since the 60s Batman tv series.

This is more a “Harley Quinn finding herself movie” than a “Birds of Prey origin movie”. Ms. Quinzel is in most every scene, and even provides narration throughout the flick. I feel like Hodson’s screenplay might’ve borrowed the team’s name because it sounds cool BUT (hear me out here, kids), at least we got them on the big screen through fantastic casting. I don’t think WB would’ve financed a BOP without introducing them through a popular character. Besides, doesn’t DC do that anyway by putting Batman on a bunch of low-profile team books? Batman and the Outsiders anyone? I’m still waiting for a Batman vs Space Cabbie charity race book.

The movie does jump around its timeline for the first half of the movie, which was causing me to get a little lost.

This was the most fun I’ve had with any movie within the DCEU. Original, wild and vibrant, with heart and assertive vulnerability. Subtle character beats had me nodding in deep appreciation, action sequences had me gleefully wincing and giggling. Unfortunately, many people didn’t go see it, which means we probably won’t get an actual sequel focusing on the “Birds” themselves. Hopefully it gains a cult status but man it’d be best for all of us fans if we saw it in the theater instead. In any case, I’ll pick this up when it hits Blu-Ray.

If you enjoyed our movie review of Birds of Prey and want to check out past reviews on previous DCEU flicks, click here!