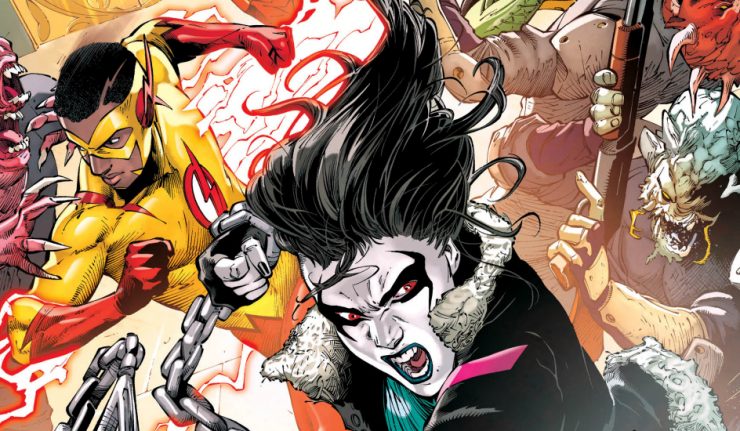 Teen Titans #39 doesn’t just start off a new story arc, it also introduces a new co-writer and an all new art team to the series. Thankfully we still have the brilliant Adam Glass co-writing, and series regulars; color artist Marcelo Maiolo and letterer Rob Leigh on-board, helping the transition run smoothly. Bernard Chang fans (and who isn’t?) fret not, as he’s still providing some gorgeous covers.

Djinn was trapped in her ring during the battles against Lobo and the Other, now Robin, Kid-Flash, Crush and Red Arrow are on a collision course with Djinn’s brother, Elias, the original genie and a demonically nasty piece of work. It’s “Djinn Wars” Part One, aptly titled “The Devil Made Me Do It.”

Adam Glass has been doing incredible work on this series, so I’m glad he’s till around telling the tales of the characters he created; Crush, Roundhouse and – of course – Djinn and Elias. This is my first experience of Robbie Thompson’s work and he’s made a good first impression. Every character is as real now as they have been over the last two years, and the dialogue is vibrant and fun.

Marcelo Maiolo’s colors and Rob Leigh’s letters help the book feel familiar, so seeing a new art team replacing the wonderful Bernard Chang wasn’t as jarring as I expected it to be. Penciller Eduardo Pansica and inker Julio Ferreira have delivered first rate art on their Teen Titans debut. Pages 1 to 5 draw the reader in with terrific action, and some nice acting from the cast. Their version of Elias is cool, and very, very creepy.

As I’ve mentioned, we have a new co-writer and art team this month, and while I don’t have anything catastrophic to complain about; is it me, or is there an absolute truckload of dialogue in this issue? Look up, at pages 1 -3 to see what I’m talking about. Don’t get me wrong, I love a comic that actually gives me something to read, but the word balloon quotient is incredibly high and taking up a lot of the new art-team’s space.

Reading through it, while it’s all well written, I do feel that not all of it is strictly necessary. I think that just as much info could have been conveyed with 50% less dialogue. Rob Leigh is definitely earning his page rate this month!

These quibbles aside, Teen Titans #39 is till a very strong comic. The way that the team has set their mistakes and differences aside, in order to rescue Djinn, is fantastic. I love all of these characters, and that’s completely down to how well written and drawn they are. I foresee that this creative team will continue to deliver all the fun, action, suspense and surprises that I’ve come to expect from this consistently excellent series.

“Titans United”, I love it!