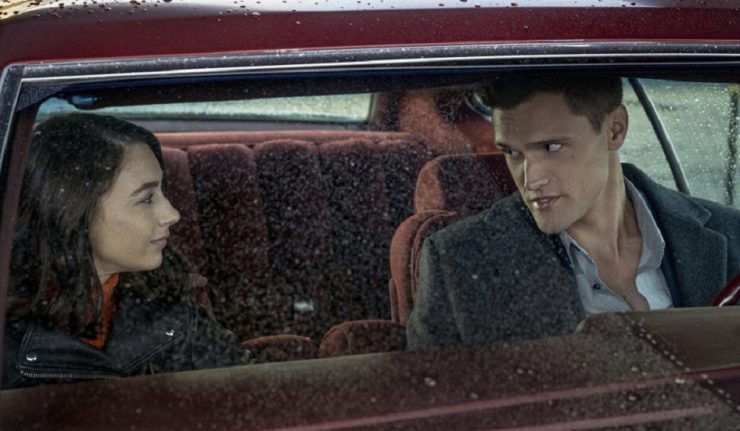 Synopsis: Ralph finally tracks down Sue Dearbon but gets caught up in a larger mystery; Iris and Eva struggle to escape the mirror world while Iris’s doppelganger continues to manipulate Barry.

The course of true love never runs smoothly, and the element of surprise definitely works in this week’s episode.

Sue Dearbon, at last. In a very Ralph-centric installment, Natalie Dreyfuss’s Sue takes Elongated Man’s world by storm. The writers are clever to show her as not a damsel in distress – a cliche she even chastizes throughout the episode – and makes her independent and strong. Her chemistry with Sawyer is instant as they play well off of each other. Whether they are ribbing each other or slowly connecting to a point, they seem like a natural fit. Since mirrors are in the background of this installment, they truly are reflections of one another. Easter eggs surrounding Sue’s comic book background easily misleads the viewer and sets up the surprise reveal of her as a socialite-turned-thief as opposed to missing person. What works in Ralph’s story is that his decisions reflect Barry’s influence on him. His openness with Sue in spite of himself shows a large leap forward from where he started from. The writing is clever in that it uses his character growth and throws in a double-cross that cuts him deep. Sue even uses his dual identity against him to keep the truth of her real agenda from her parents, just as she uses his powers to break into that vault. Natalie pulled off the turn brilliantly; her character likes the cat-and-mouse game, and she sells it with her smile. Further, the last-minute twist that Sue’s agenda veers right into the investigation of Black Hole. Hartley sells Ralph’s frustrations at the episode’s end very well and gives the viewer the impression there’s more going on beneath the surface than just a case gone bad.

Mirror-Iris – yes, I’m renaming her from “Evil Iris” because we can’t really say what her true nature is at this point – continues to work her magic while real Iris contends with Eva McCulloch’s despair. This week Candice has the opportunity to play both versions of her character, and with the real Iris thrown in, Mirror-Iris’s responses and behavior appear that much more duplicitous. Her interactions with Nash – more on his situation later – and Barry show she has a definitive agenda that goes beyond Black Hole. Plus her words to Ralph in the resolution appropriately rub the viewers the wrong way given their irony. There is also a distance developing with Barry via just kisses on the cheek. In particular, the Mirror Gun links her to McCulloch Industries. Could we be seeing a version of Iris that becomes Mirror Master (or Mistress)? Or is she planning on making her new situation permanent and destroy the mirror? As for the real Iris, her experience with metahumans and abilities are her tether to reality that a disconnected Eva desperately needs. Efrat Dor delivers a strong performance as Eva, who is a myriad of despondence and despair having been cut off from reality for six years. The nod to Sam Scudder and how he trapped Barry three years ago is needed to establish Eva as the new Mirror Master. Brilliant decision on the writer’s part to not make the liquid nitrogen strategy the way out this time. One theory is that the reason it didn’t is because this a reflection of liquid nitrogen and, like everything else on that side of the mirror, is therefore superficial. Nice level of detail in the set design by making all the writing backwards and adds to Eva’s isolation. I look forward to seeing how far her mirror powers actually go.

Harry Wells? This is the second time we have seen Nash see the late (?) great Harrison Wells of Earth-2 Post-Crisis. Tom is brilliant in his subtle distinctive performances between the on-edge Nash and the condescending Harry. It leaves the viewer to wonder what exactly are they seeing: Harry’s ghost or Nash’s survivor’s guilt? Cisco had laid into him about what his actions had done, so could he be hallucinating? If that’s the case, then how would he know how Harry would look like? And if that is actually Harry, how can only Nash see him? Is this a new doppelganger scene? They’re not occupying the same space since one is metaphysical. As we have learned in Batwoman, the new rules of reality state that two doppelgangers cannot occupy the same plane or both would die. Will this be addressed in this subplot?

The downsides of this week involve Cecile and the fight between Ultraviolet and Sue. At first, Cecile’s scenes make it appear as though she’s going to be central to the plot that will unfold between Sue and Ralph. However, the downside comes of her just being an annoying cheerleader for these two crazy kids to get together in a very cringe-worthy encounter at Jitters. Then there is the fight between Ultraviolet and Sue. This woman has fought The Flash and Elongated Man to a standstill, and yet Sue holds her own? The technomusic and stylized choreography only serve to take the hyperrealism into the surreal. Plus, while we have to suspend disbelief where Ralph’s suit is concerned, there wasn’t enough time during gunfire for Sue to strip down to her Black Widow-esque catsuit. She looked hot, but we can’t suspend disbelief here. There is also too much convenience to be had in the final resolution; it’s as if the writers felt the need to throw Flash into Elongated Man’s dilemma. It only serves to compound Ralph’s screwup and makes him appear incompetent. Cisco was able to handle himself without Barry around in that pre-Crisis episode surrounding his doppelganger. Having Barry investigate a case for Joe was fine and good, but it’s not always necessary for Team Flash to accidentally converge on the same investigation and bust. Also, I feel as though Sue’s story should have been – for lack of a better word – stretched to two episodes. It would have served to show off Ralph’s abilities more so than these one-shots the series seems to present him in.

I give The Flash 6×12 a 3 out of 5. While we got a strong Sue Dearbon debut, the possible return of Harry, and more details on Mirror-Iris’s nature, the episode again suffered. It didn’t need a cringe-worthy Cecile, a WWE-style brawl that lacked teeth, and predictable convergence of investigations. Further, again, the Sue story could have extended to a second episode before the big heel turn. Anyway I’m anxious to see what this new Mirror Master can do and how the Mirror Gun can factor into it. Further, which way will she go when she learns of how far her husband has fallen? Beneath it all, Black Hole seems to be at the center of it. Still, they need to hype up how far it reaches and what its ultimate aim is. After Crisis and Bloodwork, the show needs a definitive antagonist that tests the fastest man alive and company beyond Ultraviolet and Doctor Light. See you guys next week!