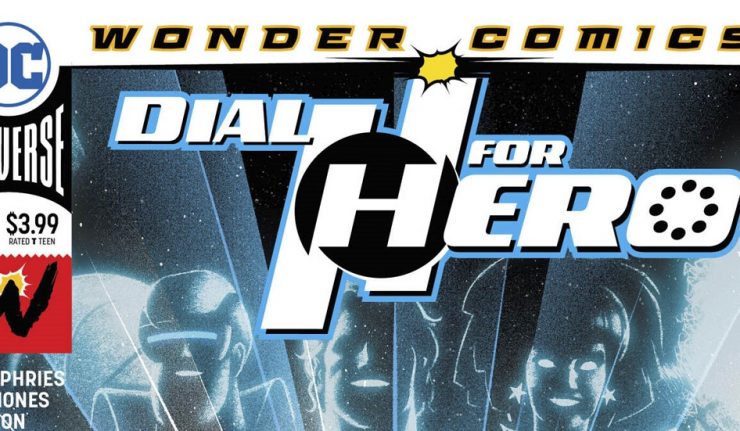 Dial H for Hero #12 finds Miguel facing his most dangerous opponent yet-himself! With the fate of the Multiverse hanging in the balance, Miguel must battle his literal dark side. Will he and Summer survive the experience? And will the power of the H-Dial be lost for-ever? This is the conclusion of the twelve issue arc that revisits Robby Reed and his adventures with the H-Dial.

It’s over.  And that is a huge positive.  I do realize that there are a lot of people in the decision making chairs that want to revisit some nostalgia and get a kick out of a reboot here and there.

But as I was mired in reading this particular comic under the Wonder Comics label of DC, I was challenged on a lot of different levels.

Both Joe Quinones and Sam Humphries poured a lot of themselves into this reboot or revisit.  And I appreciate that, but I also appreciate ketchup and ice cream.  Both of these things are great, but when mixed together gives an odd taste in one’s mouth.

Perhaps a six issue arc was what was needed as it was anchored in Miguel’s need to do something as important as what Superman does.  Naomi took care of that in her own comic, and provided that spark we needed.  Superman was the anchor of the first few issues, and was what was needed to get this franchise going again.

And as we see in the conclusion, Superman is always at the center of it all.  Kudos for the nod to the original Superman movie and the nod to Marlon Brando’s image as Jorel!

But somewhere DC decided to put Miguel and Summer in the mix, and while it was a good idea on the surface, it got too busy for these kids.

Perhaps this sounds sour, but too much of anything is too much.  You ever go back for a second or third helping at Thanksgiving.  You’re stuffed.  And there is still food left over, and you don’t know where to put it.

I think that Quinones and Humphries has to spread six issues into twelve.  That is a challenge for anyone.  And while I admire both of these two and their respective crafts, Dial H became too much for readers.

If this was the regular canon or even the black label comics, then that is the sandbox you mentioned that in. But not under the Wonder Comics line that houses Scooby Doo.  Where Are You?  Those are conversations that need to be had among children and their parents, but I’m not sure if this was the venue to initiate that spark.  Perhaps I am being prudish, but to each his own.

What started out with Miguel’s quest to be a hero has ended up being an odd maze of characters and inside jokes.  Reading this comic was like not being included in the inside joke.  You had to do the research to see which art style and comic story lines the author was providing a nod towards.

I hope Miguel and Summer find a home in Young Justice as this ride has been tough.  I think those two characters can be perfect wild cards to the stability of the characters in Young Justice.  If this is what it took to get them into the DC Universe, then so be it.  Or rather “Sockamagee!”