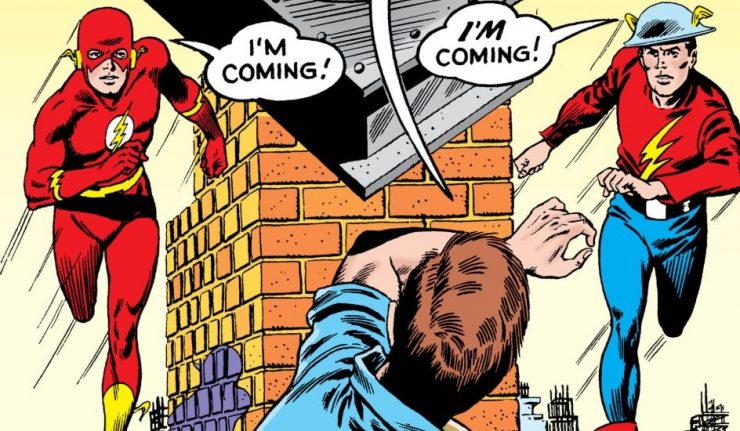 The Flash #123 Facsimile Edition: The classic tale from 1961 that introduced the concept of the Multiverse to the pages of DC Comics is reprinted here! There’s a crimewave in Central City, and the Flash will need help to stop the villains’ spree-fortunately, help is on the way in the form of the Golden Age Fastest Man Alive, Jay Garrick!

There are many comic books that can claim the status of being a landmark issue. They might introduce an important character or team. However, The Flash #123 introduced a concept that shapes the very cosmology of the reality depicted in DC’s titles, for it was this issue that showed us a parallel Earth outside of the main DC Universe. It was this new idea that soon led to to the DC Universe becoming a Multiverse.

Reading this issue might be a bit confusing to younger readers accustomed to DC’s golden age heroes existing in the same world as the modern heroes. But readers of my generation will remember that the Justice Society and all the other World War II era heroes existed on a separate Earth of their own. But what must it have been like for readers in 1961 to encounter the idea of another Earth for the very first time?

It is said that many great stories arise from asking, “Wouldn’t it be cool if…?”. Gardner Fox had such an idea, asking “Wouldn’t it be cool if Barry Allen teamed up with Jay Garrick?”. Unfortunately, Jay had been established to be a fictional character starring in the comics Barry had read as a child. Fox wanted the meeting to be real, not a hoax, not an imaginary story.

So Gardner Fox borrowed the concept of parallel Earths from science fiction stories and established that Jay’s adventures featured in those comics had also happened on a parallel Earth. We later learned that DC’s other Golden Age heroes also existed on this Earth, which gained the name Earth Two, with the Silver Age DCU being Earth One. This led to other Earths being introduced, and the first iteration of the Multiverse was established.

There has recently been some discussion on Twitter about whether or not Gardner Fox was a good writer or not. Admittedly, the story is rather simplistic by today’s standards. However, I don’t think that’s a fair standard to hold him up to. His writing was very much of its time. Generally, children were the main audience, so story complexity took a backseat to high-concept ideas and non-stop action.

I have to admit that I’ve never been much of a fan of Carmine Infantino’s art. By the 1970s and 1980s, his art had gotten painful to look at, it was so bad. However, this is back when it actually was pretty good. The lines are clean and neat. I’m not sure why his art changed over the years, but I wish it had remained like it was in this comic. Also, I miss seeing those hands extending from the caption boxes, a trademark of Infantino’s Flash.

Another thing I love about these Facsimile Edtions is how they keep the ads intact. Looking at the advertisements of the era gives insight into the original issue’s context. You get a feel of what readers of that era were like from seeing what toys they might have played with, the TV shows, they watched, and the music they listened to.

And I did find one line of an in-house ad particularly amusing, given the price of comics today:

The only negatives I could attach to this comic would come from comparing it to today’s standards for storytelling in comics. I don’t feel that’s a fair comparison considering that comic creators were aiming for an older demographic. Also, writers and readers take the medium more seriously. Comics of that era were mostly fodder for kids, while they are recognized as a bona fide art form nowadays.

The Flash #123 Facsimile Edition reprints one of the most significant chapters in DC history. With it being printed in single issue form, on newsprint, and with the original ads intact this is likely the closest many of us will get to having the same experience of comic readers in 1961 reading the original. This story is in every sense a classic, and the Multiverse first introduced here has become the bedrock on which all of DC’s stories rest.

If you want to read more of DC’s early stories of parallel Earths, you might also want to check out The Flash Of Two Worlds Deluxe Edition, a hardcover collection of this similar stories.

Also, you might be interested in reading DC Comics News reviewer Matthew Lloyd’s Retro-Review of The Flash #123.