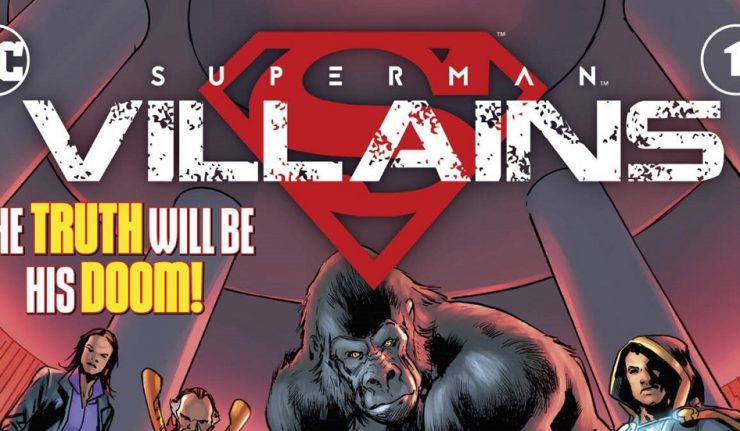 The Man of Steel’s greatest villains react to the biggest news to ever rock the DC Universe. Lex Luthor, Mongul, Toyman, The Joker, and more of the world’s greatest villains must come to grips with how the world changes now that the truth has been revealed by Superman. Some of comics’ most unique and creative voices unite to tell a story that changes all the rules.

Where to start?  These are the “fillers”, the “sand between the rocks” stories that give you the implications in others’ lives as to the choice of revealing that Superman is Clark Kent.  The butterfly wing that flapped when Clark Kent revealed to the World he was Superman (or vice versa).

First, we did worry about Ma and Pa Kent.  And to be honest, I am so drenched in Superman timelines that I was not sure Pa Kent was still around.  But I’m glad their existence will be well preserved for the time being!

Second, Mongul seems to be more formidable than Doomsday and apparently he has been watching Netflix for a bit of a reset.  (Inside Joke for all Living with Yourself fans!).

Third, Life at the Daily Planet.  It’s become simpler (exit any minor villains that come calling) and maybe a bit more complicated since there is a new owner.  And what about Clark’s peers?  Love that Steve Lombard is upset.  I never liked that character anyway.

The Joker really knows how to leave a phone message for Luthor.  This is comic genius as the Clown Prince knows how to really hit the buttons on everyone!

Toyman is redeemed…or so it seems?  Bizarro is confused, but whow is he looking like he should be part of the Umbrella Academy in this issue.

And Lois….wow!  She is AWESOME.  With the recent events in Lois Lane and her power at the Daily Planet, she is as formidable as any hero in this Universe!

The mixture of artists make the impact of this comic better!  If only one had contributed, you really could not get the style and tempo of each “mini” glimpse into Superman’s life or rather the life of those affected by his choice.  Each artist and story has their own tone to their story telling and the planet story is so dramatic…so Mary Worth style… and again, the Bizarro story is so Umbrella Academy…and Ma and Pa Kent…that is totally an homage to the Dan Jurgens’ years (my opinion!).

The cover leads me to believe that as as reader I’ll get a few more insights from other Rogues, particularly those from others in the JLA.  But not so much.  Toyman gets a bit of redemption treatment as a foreshadow of things to come with Leviathan.  But where does Cheetah fall in this mix?  And what about Black Adam?  The cover leads us down a tricky road.

Is it a bait issue?  Sure… it makes a casual reader want to go pick up other Supes titles.  And it begs the question whether there will be a Villains #3, #3, and so on!

Given that I wanted this issue to be over 100 pages long, I still hope there are more editions!  Keep ’em coming.  I like the sand between the rocks.  It works!