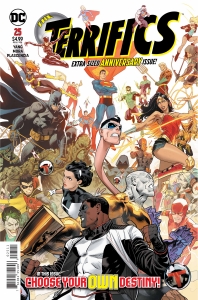 The Terrifics #25: Choose your fate, choose your action, choose your destiny! In this special extra-sized 25th issue, Michael Holt has dis-covered a deadly hidden enemy, and only a series of life-or-death simulations can bring the threat to the forefront! But when Mr. Terrific lies to his team, how can they trust him again? Don’t miss this epic multi-path journey that puts you, the reader, in charge of the story! Pick your ending, but choose wisely! The Terrifics team hangs in the balance!

I remember in Grade 6, finding a new book in my school’s library called The Cave Of Time. This was the first book in the descriptively named Choose Your Own Adventure series. Instead of having a linear story, these books provided stories that branched out, allowing the reader to interact with the story by deciding which branch to follow. Thus, you could experience a different story with each readthrough of the book.

To commemorate the 25th issue of The Terrifics, Gene Luen Yang presents the readers with such a story. This isn’t the first time for a comic to attempt an interactive story. The Vertigo series The Unwritten by Mike Carey and Peter Gross told featured one in their 17th issue. However, Yang does add some unique elements.

Instead of this just being a story with multiple paths and outcomes, Yang provides an in-story explanation for the branching narrative. Mister Terrific has created a device, which he calls the T-Infinity, which calculates and all theoretical possibilities for a situation to find one that reaches a desired outcome. Mister Terrific deploys this untested device to help the Terrifics find a successful resolution to an encounter that they are faced with. 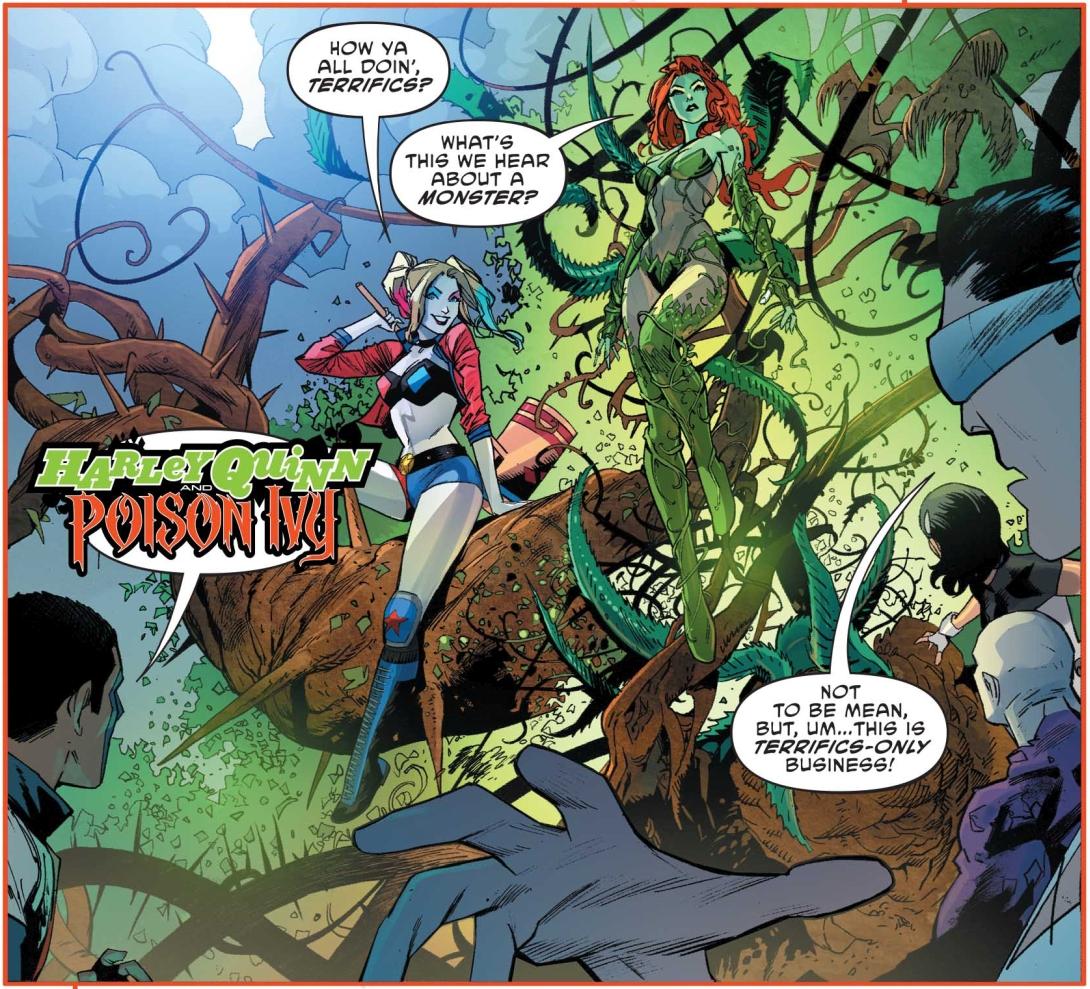 Choose Your Own Adventure stories tend to be short, as a greater number of possible stories have to occupy the same space that one linear narrative would otherwise. However, what Yang’s story loses in length, it gains in depth, as each possible version of the story is still part of the overall narrative.

He accomplishes this in two ways. First, all endings that do not achieve an acceptable resolution are not labelled as a terminal point. Instead, they return you back to an earlier decision to choose a different possibility. Thus, you continually loop until you make the correct decisions that finally lead to the desired ending. Thus, a reader will likely experience many or possibly all branches of the story before they reach the final conclusion.

The second, is the fact that Michael seems to be remembering events from previous loops through the possibilities. At one point, Michael is able to choose the right choice out of five options because he remembers seeing an adversary making that choice in another possible iteration of the scenario.

And Yang does something truly original in The Terrifics #25, by using the interactive structure of the story itself to solve a horrific dilemma. A mystical place called Tengu City is emerging into the location occupied by Gateway City. Stopping this will destroy Tengu City, but not doing so will doom Gateway City. 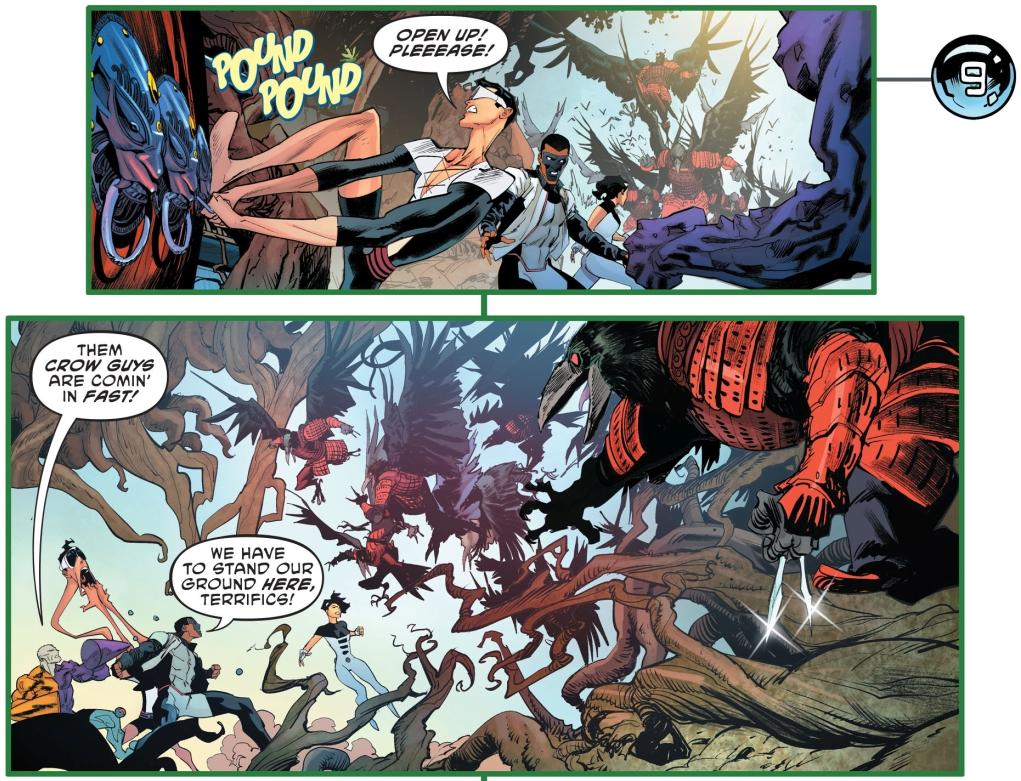 But having realized that the possibilities created by the T-Infinity somehow persist, Mister Terrific ensures the survival of both cities by allowing each city to survive in a different possibility. The Terrifics experience a branch of the story where their home city survives, but he gives the denizens of Tengu City the T-Infinity so they can experience a different branch where their city is the one that survives. Mister Terrific therefore manages to use the branching nature of the story to save both cities in separate timelines.

I wonder if Yang meant this as a commentary on DC continuity. DC has often changed the timeline to make major changes in the universe, for example the Flashpoint causing the New 52. But like Yang’s story has Tengu City surviving in an alternate possibility, the pre-Flashpoint DCU still exists in another timeline.

I do find it somewhat unrealistic that the mere choice to lead the tree monster east or west would lead to the team encountering either Harley Quinn and Poison Ivy or the Justice League of China. It’s unlikely that both groups were in the area at the same time. And if they were, it seems likely that all of these characters would end up involved in the conflict regardless of the direction chosen.

Also, the cover implies a massive amount of guest stars in this issue, rather than just these. The cover shows the actual Justice League, Teen Titans, and assorted other DC stars. A brief cameo by Harley and Ivy or the JLC is a bit of a letdown. Although, it is nice to see Yang briefly bring back the stars of his New Super-Man title.

Since its inception, this has been a fun title to read, and Yang makes The Terrifics #25 even more so by using a branching narrative. On top of this, he adds some twists to make it unique from other interactive stories. This makes this landmark issue something truly special.