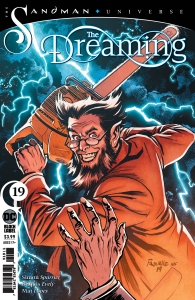 The Dreaming #19: A lost dream has returned to the Dreaming to rally the troops against the rule of Wan-but without Dream himself, do his subjects have the strength they need to prevail? Or has the unconsciousness of humankind already been changed forever?

Well, we’re almost at the end of Simon Spurrier’s story, and the time has come to explain in detail what’s been going on for the last eighteen issues. Thus, The Dreaming #18 features a lot of exposition, delivered by Lucien the Librarian to Wan, the artificial intelligence that has taken over the position left vacant by the Lord of Dreams.

Exposition isn’t necessarily a bad thing, and it’s better to get wrap up all the unanswered questions when a series is nearing its conclusion than to leave readers wondering. Plus, I quite enjoyed the unique spin on how the exposition’s delivery.

This unique device occurs at the beginning of the issue. The narration captions tell the reader about Wan and his “dark twin”. Except both can hear the narration and react to the unseen narrator. Then Lucien steps forward, revealing himself to be the Narrator. Lucien has transcended being merely a character in the story and has taken on a more important role.

This is quite significant, considering that the Dreaming is a realm of stories. A story’s narrator holds an important and powerful role in a story. As Lucien states, “A narrator answers to none but the story”. This gives Lucien an immunity to the A.I.’s threats to unmake him.

Another interesting facet to the story is the revelation that Dream was incapacitated by tattooing a dreamcatcher onto his back. Although it seems somewhat silly, it also seems an oddly appropriate way to cripple a Dream Lord. Lucien points out, “I suppose that’s why it worked so well. *sigh* What’s Dream of the Endless if not a childlike symbol?”.

And I loved the bizarre Bugs Bunny reference as Dora makes her appearance, along with the raven Matthew: “Kill the wa-bbit, kill the wa-bitt, kill the waaaaaa-bbit–“. This came completely out of nowhere, but was weirdly appropriate, considering that the wings on Wan’s head do resemble rabbit ears.

And finally, we get to the central revelation of the issue. The various characters in the Dreaming are not the servants of Dream, but are in fact aspects of the Dream Lord. Dream was the cover of the book, but the denizens of the realm of Dreams were the pages. “We are him…,” they declare, “Everyone dreams the Dreaming”.

Like Gaiman, Spurrier has done a neat job of tying up all the elements in his story, leaving no loose ends. I find no fault in his storytelling so far. Now with only the concluding issue left, it only remains to be seen if his conclusion lives up to the brilliant set up he has given it. There is a slight danger that the ending might prove to be anticlimactic, but I believe that Spurrier is capable of providing a suitably awesome ending to his story. 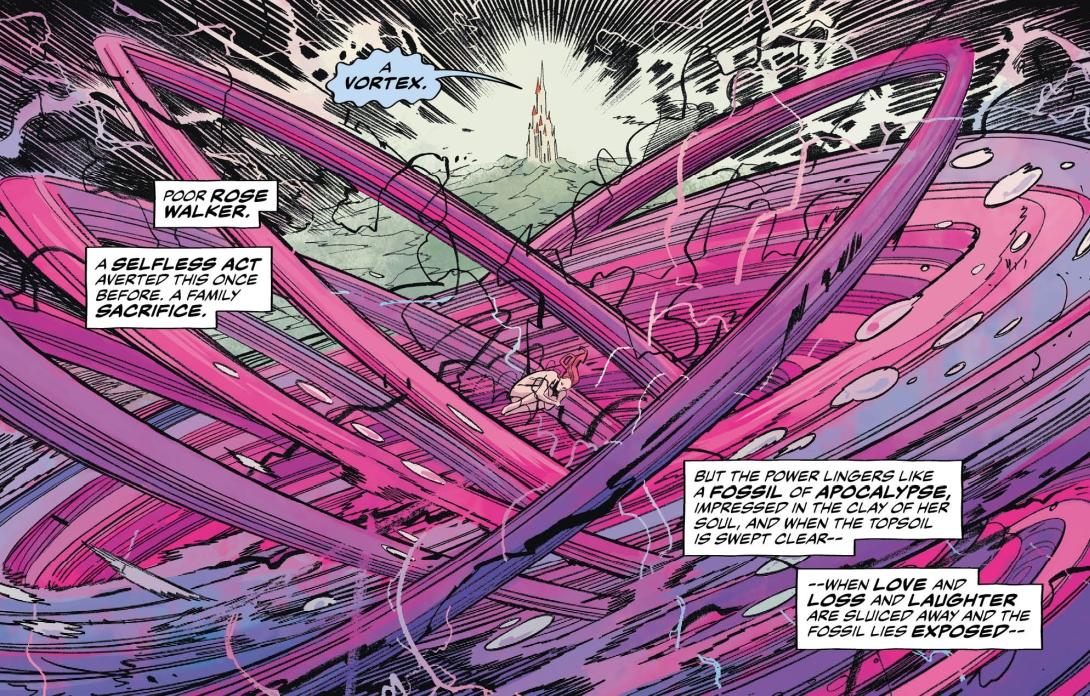 With The Dreaming #19 being the final issue of the issue, it’s hardly an ideal jumping on point for new readers. But, if you haven’t been reading this series, I urge you to seek out the back issues or at least read the trade paperbacks when they come out. This story has proven to be a worthy continuation of Gaiman’s Sandman story, and I look forward to reading its concluding chapter next month.