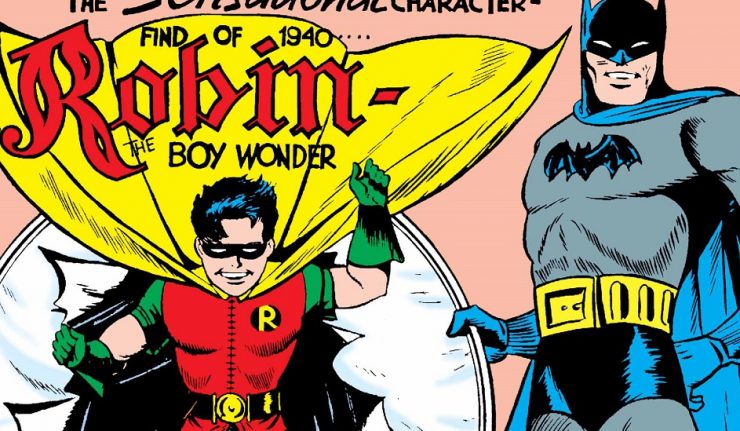 Besides the introduction, first appearance and origin of Dick Grayson- Robin, the Boy Wonder- Detective Comics #38 also features a number of Golden Age features, including, the Crimson Avenger, Slam Bradley and Speed Saunders!

DC Comics doesn’t reprint Golden Age material in affordable volumes often.  So, the Detective Comics #38 Facsimile Edition is a “must” buy for anyone with just a hint of interest in comic book history.  While Robin’s first appearance has been reprinted before in different formats, the rest of the issue is not readily available.  While much of it will feel like filler to a modern reader, this is a true snapshot of a past time.  Comics weren’t always about super-heroes, and it’s easy to see the many different features in the issue.

The anthology format was the staple of the era.  DC has recently begun attempting the anthology format again with it’s 100-Page Giant Comics.  Originally, only available as Walmart exclusives, these comics feature new material as well as reprints.  Sometimes, like the Swamp Thing book, they focus on the horror/magic genres, but even The Flash 100-Page Giant has reprinted other characters not directly related to the main character.  The newest batch of 100-Page Giant Comics are also now available in comic shops around the country.

However, it’s notable that Detective Comics was the first comic devoted to a single theme.  It’s obvious here as the only slightly costumed character besides Batman and Robin is the Crimson Avenger.  He would later don a proper costume and become a member of the original Seven Soldiers of Victory in Leading Comics, Here, he more resembles his inspiration, the Shadow.

These facsimile editions reprint everything!  Standard ads, house ads, you name it!  How many of you knew that in order to get a lower shipping rate, comics had to contain 2 pages of text material?  That’s why comics up until the mid sixties still contained a 2 page text story!!!!  Don’t believe me?  Check out Marvel’s early ’60’s comics- Tales to Astonish and Tales of Suspense etc….  This facsimile edition reprints this as well, it’s all here.  The house ads are fun to see.  The advertised comics are all anthology titles.  At some point in the history of comics, anthologies fell out of favor.  As page counts dropped, it made more sense to feature a single character for 20 some pages as opposed to 4 characters for 6 pages.  Although, it’s notable that even in the sixties, comics like The Flash would feature two stories of the Fastest Man Alive instead of a book-length adventure.

The Batman story in this issue introduces Dick Grayson as Robin, the Boy Wonder.  This is a landmark event in the history of comics.  Dick is the first teenage sidekick, a motif that over the years would become a staple of the super-hero genre.  The sidekick was introduced to give young readers, the majority of comic book aficionados of the time being 12 years or younger, a character with which to identify.  It’s a true comic book first.

It’s important to mention that even though Bob Kane is credited with pencils on the Batman story that introduces Robin, Jerry Robinson’s inks, or “ghost” pencils are probably more important.  A close analysis of Kane’s style will reveal another hand at work on this issue.  It’s not far fetched to believe that Robinson probably did major reworkings of Kane’s pencils.  Kane’s anatomy was never this good.  Kane’s natural style was much more suited to humor strips. Kane’s best Batman work are Alex Raymond Flash Gordon swipes.  Jerry Robinson does not get enough credit for his early contributions to the Batman feature.  It’s an unfortunate reality of the industry at that time.

The stories themselves in Detective Comics #38 Facsimile Edition will almost certainly feel dated to the modern reader.  Even if Batman and Robin are recognizable, the rest of the issue may be a difficult proposition.  This is understandable, but it’s one of those things that has to be viewed in the proper perspective.  It may be hard to digest for some, but if you can, think of this as a piece of history.  Enjoy it for what it is.  Do not judge it by current standards and mores.

Detective Comics #38 Facsimile Edition is a wonderful trip back into the past.  It’s a snapshot of comics in 1940.  There are many elements evident of the industry at the time: anthology comics, non-costumed genres, the studio system, as well as a the development of the super-hero.  Dick Grayson’s importance in the history of comics cannot be diminished.   Dick was the first sidekick, and eventually the first sidekick to break out of the role to become his own man 44 years later.  So, in celebration of 80 years of Robin, the Boy Wonder, check out how it all began in 1940!