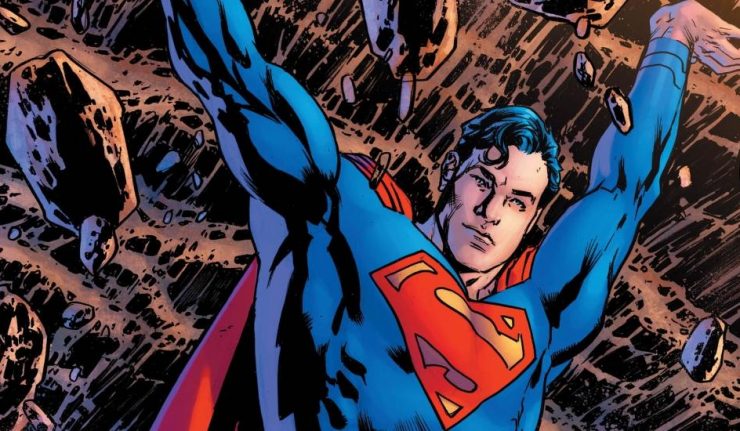 Superman #21: It’s Mongul versus Superman in the battle for the survival of the United Planets! The Man of Steel must confront Mongul in front of all the powers of the galaxy, or peace will never be achieved. During one of the most private moments in Superman’s existence comes one of his biggest challenges. If Superman fails, the whole of the United Planets falls!

In Superman #21, there are two stories going on. The main story involves Superman defending the fledgling United Planets from Mongul’s assault. The secondary plot sees Lois dealing with the ramifications of Superman’s involvement in the formation of the United Planets. Unfortunately, the second story is much more interesting than the other.

Even though Superman manages to put a stop to Mongul’s attack, it seems that he may have succeeded in destroying the organization anyway. While Superman and Mongul fight, the delegates from the various planets have started fighting among themselves.

Luckily, peace is restored when Superman turns his attention back to the delegates. At first Superman fears that this marks the end of the newly formed body, but J’onn J’onzz reassures him that the incident reaffirms the necessity for the United Planets – to prevent such incidents from reoccurring.

The Martian Manhunter is there with the rest of the Justice League, who show up to take charge of the situation. They inform Superman that he is needed back on Earth. As John Stewart puts it, “You left your wife at home in the middle of a hurricane that you created”.

Content that the situation is under control, Superman heads back to Earth in time to see Mongul’s Warworld arriving at the same time. Mongul appears to be preparing to launch an attack on Earth, which the villain believes to be vulnerable while Superman is occupied elsewhere.

We will have to wait until next issue to see how Superman deals with Mongul’s invasion, but this raises some questions. If the United Planets relies on Superman’s presence to prevent them from fighting amongst themselves, that’s likely to require Superman to spend a fair amount of his time away from Earth. But if Superman is away from Earth, will villains take advantage of his absence? Or will foes of the United Planets attack them while Superman is occupied on Earth? Can he realistically balance his time between the two?

John Stewart was correct in stating that the mess Lois is dealing with is of Clark’s own doing. But John doesn’t know the half of it. Bethany Snow, reporter for the Daily Star, tracks down Lois at her secret apartment and ambushes Lois. Snow asks Lois about the mysterious video in which Clark appears to, as she puts it, “referring to himself as the King of Earth”.

This is a bit of an exaggeration, but she has a point. When Superman took it upon himself to speak for Earth, I wondered where he got the authority to do so. As far as I am aware, the United Nations never empowered Superman to act as the ambassador of Earth. And even if they had, I am sure that he would have needed to get approval before joining an intergalactic coalition of worlds. Both Superman and Bendis have some serious explaining to do.

And pushy reporters just the beginning of Lois’ troubles. She manages to escape from Bethany Snow to find herself confronted with Cameron Chase of the FBI. It appears that the United States government has the same questions as the Daily Star for her and Clark.

With the DEO destroyed by Leviathan along with other intelligence agencies, it makes sense that Chase would have found herself working with one of the surviving agencies like the FBI. So, her presence here makes sense, and I am glad that she came out of Event: Leviathan relatively okay.

I also found it somewhat ironic that Lois, the unrelenting reporter now finds herself the target of another reporter’s investigation. This puts her in an awkward and unfamiliar situation. The tables are turned on her and it will be interesting to see how she copes.

Also, it seems somewhat foreboding that Superman apparently hasn’t shared with his wife that he has nominated himself ambassador of Earth. After seeing the video, Lois mutters, “Ah Clark. That’s the kind of thing you tell a wife…”. It seems that even Lois will have some pointed questions for the Man of Steel.

I found the story involving Superman fighting Mongul to be a bit lacking. It was okay, but it seemed to be just another typical super-powered brawl that we’ve seen so many times before. Luckily, the fight wasn’t the entirety of the issue, which is very much saved by the Lois story.

As for the idea of Superman facing repercussions for acting as the Earth’s ambassador to the universe, it’s an interesting idea that could pay off but it could easily fall flat. If Bendis comes up with some deus ex machina explanation such as a retcon that reveals Superman has been the United Nations’ amabassador to outer space all along, that would be a very cheap, anti-climactic ending.

However, if it turns out that Superman was being presumptuous, and he is rightly called to face the consequences of his actions, that opens some interesting story possibilities. Seeing how he responds to that would be an excellent opportunity for Bendis to show he truly understands the character of Superman. Bendis has a unique chance to have a story where Superman has done something improper and takes responsibility for his actions. It will be interesting to see if Bendis picks up on this.

Bendis’ Superman stories are very hit-and-miss. When he’s good, he’s fantastic, but some of his stories can be a bit of a slog to read. The parts of with Lois and the gorgeous art save Superman #21 from being the latter. Hopefully, Superman’s upcoming encounter with Mongul will be more exciting.