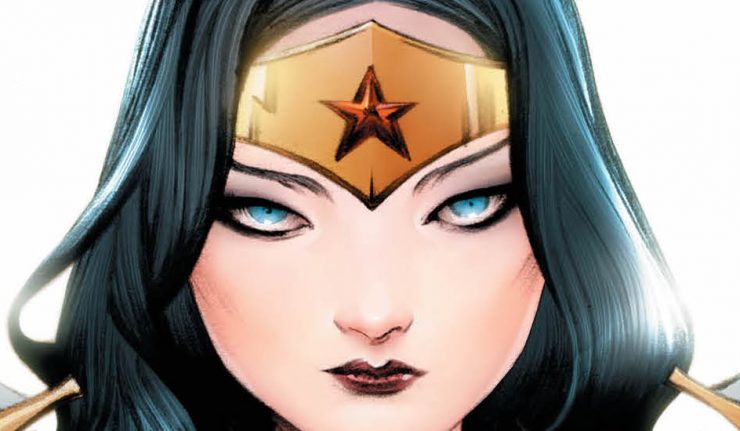 After a tumultuous start to their relationship, Wonder Woman and the ferocious warrior known as Valda have agreed to put their differences aside to hunt a mythical beast determined to destroy Boston. Now it’s a race against time to save the city and complete Valda’s quest. Meanwhile, Warmaster has set her sights on the final member of her team hellbent on revenge…Genocide! Does Wonder Woman stand a chance against her former ally’s growing army?

The interior art is fantastic. I love the style; it’s expressive and engaging. And Romulo Fajardo Jr.’s colors are gorgeous.

The main fight is fun. The thing I like most is seeing Valda be inspired by Diana. The former essentially sacrifices herself to save the city which might not be something she would have done prior to meeting Wonder Woman. Showcasing characters following the superhero’s example is a great tool to use in superhero stories.

There’s some strange time jumping in the issue and I’m not really sure why. The issue starts in the battle then cuts to Diana’s new cop friend then back to the battle and then back to the cop. I would have understood if the issue began and ended with the cop as a framing device but that’s not how it’s put together. I found the scene structure distracting.

I’m curious how everything in Diana’s story will eventually tie into the Warmaster stuff. My guess is that the cop is going to play a big part in the plan as well as Donna Troy who keeps getting name dropped. But everything feels disjointed right now. Warmaster and her allies aren’t compelling villains so far. They have potentially interesting motivations but how they go from their backstories to blaming Wonder Woman is a bizarre leap. I’m having a tough time seeing their point of view which, I assume, is why we’re spending so much time setting them up.

I think this issue is fine. My big problem right now is Warmaster. I don’t find her motivation compelling and she’s not doing much of anything. The issue feels like a lot of set up with a cool fight scene thrown in. But the art is gorgeous and there are some decent character moments.