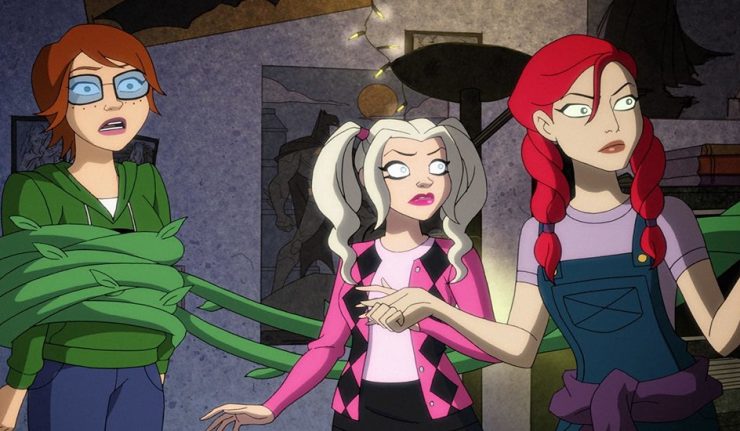 As the only source of electricity in all of New Gotham, Harley And Ivy go undercover as college students to infiltrate the Riddler’s University. While at the university, they befriend the Commissioner’s daughter, and uncover a sinister plot by the Riddler.

Riddle U was an absolute blast to watch. It was quirky. humorous, and over the top, which is what you’d expect this series to be.

Right of the bat, Harley is extremely excited about going to college, so long as she gets vaccinated for HPV. Seeing Kite-Man interacting with Harley and Ivy while flying them into the college was brief, but fun. Anytime we get to see Kite-Man is great, something I would of never of said before this series started.

This was definitely Clayface’s time to shine. Crashing Harley and Ivy’s undercover ruse with his “Stefanie” character was hysterical, and pulled it off so well.

The biggest surprise of Riddle U was the introduction of Barbara Gordon, and the origin of Batgirl. I’ve always been a fan of taking well established characters and their origin stories and putting a twist on them. It’s a good way to keep it fresh. Riddle U did just that with Batgirl. Her admiration of Batman was still their, but it took her teaming up with Harley and Ivy to take down the Riddler to give her the push over the edge she needed to become her alter ego. I for one enjoyed that slight twist, and it certainly was a fun direction to take without really changing her origin story. Also, it’s interesting to not that the voice of Barbara Gordon is actually Kaley’s sister, Briana Cuoco. She did a great job with the voiceover.

James Gordon was in rare form in Riddle U. Not only was he staying with his daughter, but seemingly has given up hope completely, turning to drinking beer in the shower and eating questionable items off his chest. But I have to admit, it works for this character. The one thing you can say about this series is that it doesn’t take itself seriously, and I absolutely appreciate that.

The fight scene at the end was great. It’ll also be interesting to see if and how keeping the Riddler alive will pane out by the end of the season.

No negatives in “Riddle U”.

“Riddle U” was a fun and entertaining episode, with a great introduction to Barbara Gordon. If your a fan of Batgirl like I am, you’ll love this episode.